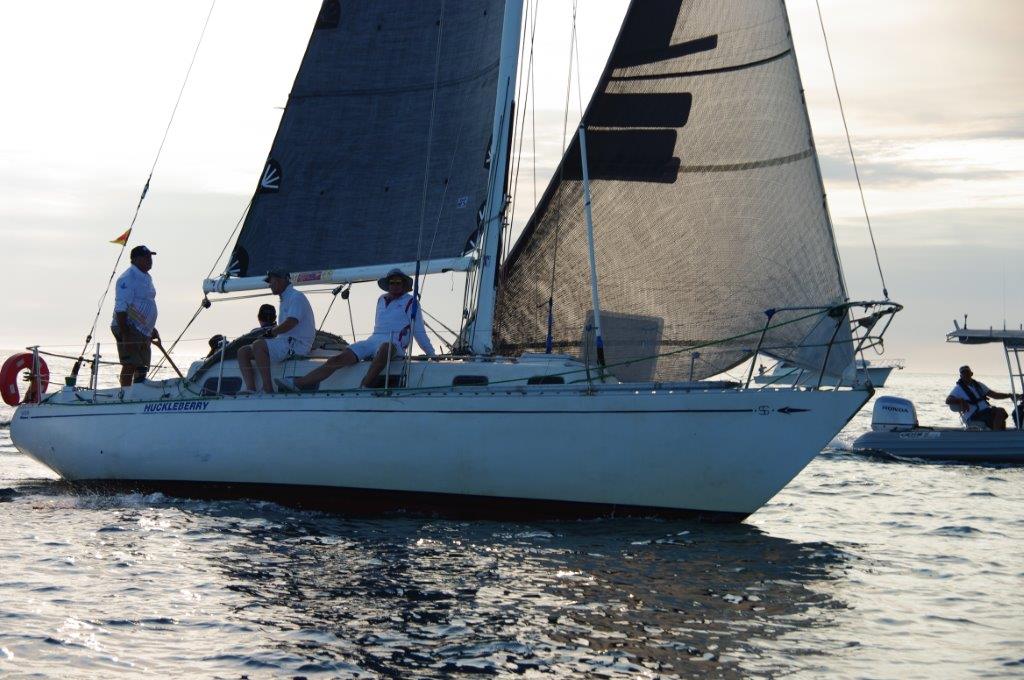 Current weather routing is predicting that this year’s Bunbury and Return Ocean Race will be a record breaking one. The 170 nautical mile blue water event is run by Royal Freshwater Bay Yacht Club and will take the fleet from Fremantle to Bunbury in the south of the state and return. The yachts will round Rottnest Island to starboard on the return leg and then finish in Fremantle. 18 yachts will contest the 70th race which will start inside Fremantle Harbour at 5:30pm on Friday 23 February.

Organised ocean racing in Western Australia began in 1948 with the first race to Bunbury. There had been regular racing on the river and from at least 1930, many yachts had ventured outside for the annual Billy Run to Rottnest Island but to arrange an offshore race down a featureless and unlit coastline was quite a bold venture. There were not many yachts with engines at the time and most had to seek a tow from the power fleet. They would lower masts and be towed down the river, under the bridges then sail the 11 mile journey across to Rottnest Island, escorted by the power fleet.

On the east coast, an annual race from Sydney to Hobart had begun. After a suggestion by Keith Stevenson and enthusiasm from Roland Smith and Cyril Sampson, who was the Commodore of RFBYC at the time, the Club agreed to conduct a race from Fremantle to Bunbury. A special ration of petrol to allow the power fleet to patrol the coast was refused due to war time shortages, the yachts would sail alone. This initial race was held in 1948, the start was inside Fremantle Harbour when the wind was favourable and they finished in Bunbury with line honours going to Keith Stevenson’s Maid Marion who completed the race in 23:29:00. Ted Luck’s Argosy was the corrected time winner. It was a success and from 1949 became the Bunbury and Return Ocean Race and the start of a developing offshore programme in WA.

The start area will return to Fremantle Harbour this year to celebrate the 70th race. The list of competitors includes the current race record holder, Craig Carter’s Indian, a Carkeek 47 and nine time fastest time winner Walk on the Wildside, Garth Curran’s Inglis 57. After conducting some pre-race navigational preparation, Carter commented that they are looking to beat the record again this year. A recently dissipated cyclone in the North West has brought an unusual weather pattern to the state so at this stage anything could happen, we will have to wait and see.

There is another yacht that has been around this course many times, the S&S 34 Huckleberry. Her skipper Phil Somerville-Ryan comments that “We don’t think they have a chance of winning but are looking forward to enjoying the sailing and racing to Bunbury”. He commenced his love of sailing at the age of 5 in a P Class in Mount Wanganui New Zealand. Being a yachting traditionalist, he was always keen to enter Huckleberry in the 70th Bunbury and Return to honour her original owner, Merv Finn, who had a long history with the race. His team of five includes seasoned yachting veteran Robin Morritt and Gareth Owen-Conway, both sailed with Jon Sanders in the 2014 Cape to Rio Race. Bruce Ellery who has been racing all week in Busselton but will ensure he is back in time for the start and 23 year old Cameron Biddle who has sailing in his blood. He is the grandson of Colin Sanders and the nephew of Jon Sanders. Cam has enjoyed some years of river sailing but looking to gain more experience in offshore sailing.

Phil also commented that the weather won’t worry his team, they will take whatever they get and are looking forward to trying out their new jib and Code 0 sail.

The race begins at 1730 (Perth, GMT+8) inside Fremantle Harbour on Friday 23 February. Part of the 70th celebrations, the harbour start will include a classic boat sail past and flyover by four Tiger Moth planes. From 1700, the race start spectacle will stream live on the Royal Freshwater Bay Yacht Club Facebook page and all yachts will carry tracking devices. The race can be followed online. Go to rfbyc.asn.au for more information.