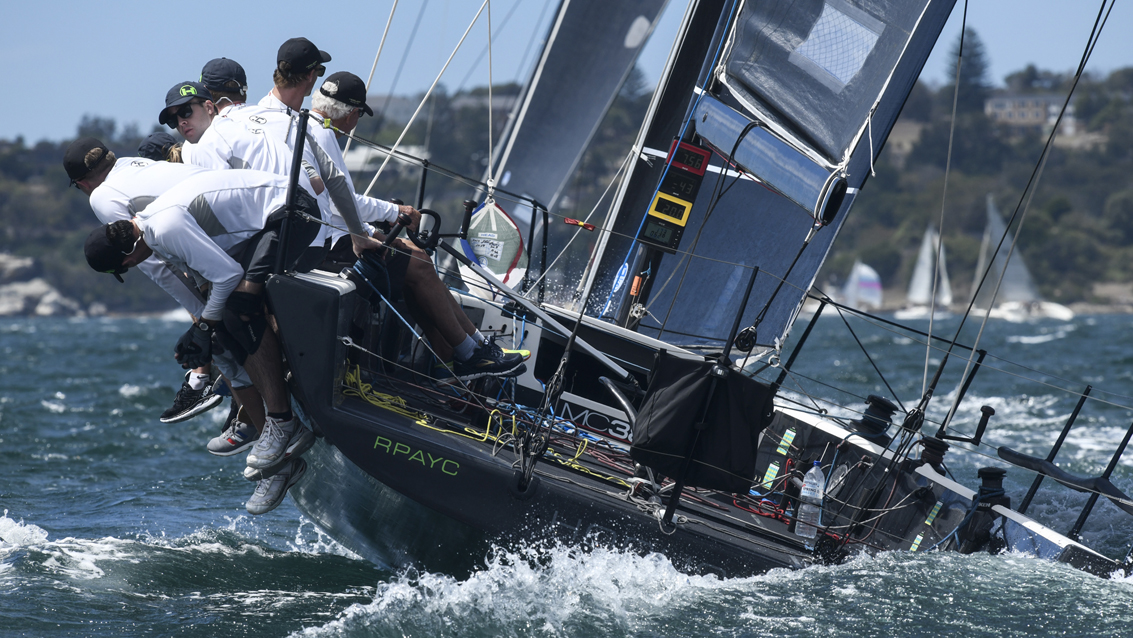 Day two of the 2018 MC38 Australian Championship on Sydney Harbour served up decent sea breezes with a side dish of feistiness as the top crews fought for every place across four exhausting races.

North-east to north/north-easterly winds 16 gusting up to 26 knots at the peak produced some thrilling white-water rides on a busy Harbour; Lasers alongside classics, skiffs and historic 18-footers in among the MC38 one design clash.

The seven-point margin back to second, Marcus Blackmore’s Hooligan and third on a countback Steve Barlow’s Lightspeed, might have been slimmer if Hooligan had avoided rig damage during a tangle with Neville Crichton’s Maserati in the last race of the day, believes the skipper.

“Neville was doing his turns when the wind crapped-out so he couldn’t steer and he ran into us, then the rigs came together,” Blackmore said.

“When we went around the bottom mark the main came out of the head-board so we had to pull the sail down and do a temporary repair. It was disappointing as we were doing well.” Hooligan finished last in that race.

Commenting on the top mark chaos Blackmore grinned: “There was a lot of banging and shouting; it was a bit of a hoot. It’s on tomorrow.”

Emotions boiled over when the fleet converged in Chowder Bay and the breeze went light and shifted under a rain cloud at the same time, reducing manoeuvrability and leaving Maserati with few options – a sitting duck for on-water umpire Henry Kernot.

Two penalty turns later Maserati appeared done for however they clawed their way back from last to second by staying on the eastern shore while the bulk of the fleet headed for Nielsen Park on the western side, Softbank Team Japan’s Ben Lamb doing a top job on strategy alongside tactician Joe Turner. Scoring 5-1-1-2 delivered Maserati the boat of the day flag.

Back at the host club, Nell Hardie, Ginger’s runners and pit person said: “We did well today; everyone found it pretty tough out there but when things didn’t go well we were able to keep it together. We were pretty consistent; it will be good to get back out and maybe get a couple more bullets tomorrow and make those our consistent scores, rather than seconds and thirds.”

For Shaun Lane and Quentin Stewart’s Lazy Dog it was a class initiation they newest MC38 crew won’t forget in a hurry.

“We just broke gear all day,” said Lane smiling. “We had a bit of an issue at the top mark and dropped the new kite in the water and wrapped it around the keel – it’s got a bit of a tear but can be repaired.

“In the next race we realised the base of the mast was compromised and carbon fibre was going everywhere down below so we de-powered and called it a day. We are learning – and we are happy to come at the back of the field. Hopefully we’ll be out there tomorrow!”

Racing is due to begin at midday on Sunday February 25, 2018 and three final races will tidy up the series hosted by Middle Harbour Yacht Club at The Spit and race managed by Ted Anderson and his team.

Sydney’s closed water forecast is for 15-25 knot sou’easterlies and rain.