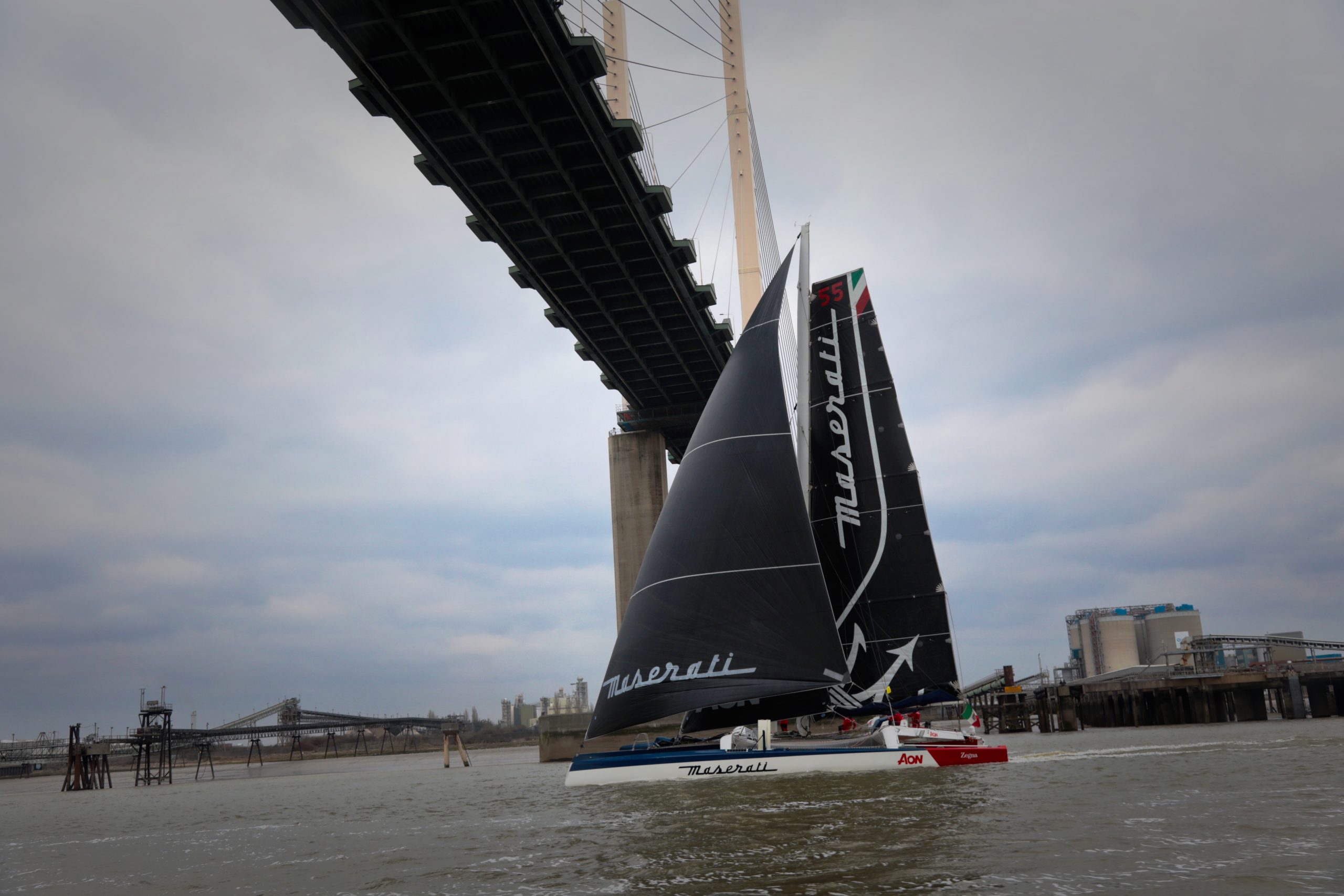 They have done it – at 13hours 20minutes 26seconds UTC, Maserati Multi 70 and her crew crossed the Tea Route, Hong Kong to London finish line, passing under the Queen Elizabeth II Bridge.

Giovanni Soldini and his crew of Guido Broggi, Sebastien Audigane, Oliver Herrera Perez and Alex Pella, took 36 days, 2 hours, 37 minutes and 2 seconds to cover the 13.000 nautical miles of the theoretical route between the Chinese port and the capital of the United Kingdom.

They have beaten the record by almost a week (5 days and 19 hours) that previously belonged to Gitana 13, the 100-foot maxi catamaran that completed the route in 41 days in 2008. On the ground, the Italian trimaran travelled 15.083 nautical miles at an average speed of 17.4 knots.

Just after the finish line, skipper Soldini commented: ''We are super happy but also very tired. The last 48 hours have been very tough, sailing in the Channel upwind with a lot of breeze, a lot of sea and a terrible cold.

“The record went very well, we are very happy with our route. The most difficult part was the last one: with more favourable conditions in the Atlantic, we could have gained another three or four days, but that's okay.

“It could not have been better. Technically the boat is perfect. From the last time we put Maserati Multi 70 in a yard, we have sailed more than 19,000 miles and everything is fine on board. This is testament to the preparation work of Guido and the whole team – an excellent crew.''

Soldini is currently waiting for the official confirmation of the record by the World Sailing Speed Record Council, the organization that validates the ocean records.

Day by day summary of the Tea Route Challenge:

Jibing in the South China Sea
After the start on January 18th, on the first two days, the crew took advantage of the north-east wind, making a series of jibes to get closer to the southern tip of Vietnam. On the third day, a first transition with little wind off Singapore is negotiated. On the fourth and fifth day, the crew still sails with light winds to pass the Sonda Strait and enter the Indian Ocean with a two-day advantage on Gitana 13.

From the seventh to the ninth day, Maserati Multi 70 sails downwind at high speed on the direct route in the south-eastern trade winds of the southern hemisphere, recording the best sailing day with 644 miles travelled in 24 hours.

On the 10th day, the right hull's rudder breaks following a collision with a floating object.
On the 11th day, the broken rudder blade is replaced. The progress of Maserati Multi 70 reaches its lowest level falling below 250 miles.

On the 12th day, the route comes out of the trade winds range and passes a high-pressure neck.
The three following days are characterized by the passage of three cold fronts. Maserati Multi 70 reaches the southernmost latitudes of the route, around 38 degrees south.

The Cape of Good Hope is passed on the sixteenth day with a five-day lead over Gitana 13.

South Atlantic along the African side The South Atlantic climbing begins downwind.
On the 19th day the eastern option is decided upon to cross the Equator.
From the 20th to the 23rd days, Maserati Multi 70 heads to West Africa following a direct route, crossing off the Gulf of Guinea.
The Equator is passed on the 22nd day. The Maserati Multi 70 reaches its maximum advantage – a 2.046 mile lead.

An unusual route also in the North Atlantic
An unexpected light breeze bubble slows the landing in Sierra Leone on the 23rd day. The doldrums and a stationary tropical depression near the coastline must be passed through. The situation of the Azores high pressure remains atypical, it is quite impossible to avoid it passing to the West, the eastern option goes on.

From the 25th to the twenty-fifth to the 30th days, Maserati Multi 70 makes several tacks along the coast of West Africa up to the Canary Islands. The advantage remains stable at around 1,200 miles.

On the 31st day, upwind sailing against a north-east breeze phase begins; Maserati Multi 70 is getting closer to the coast of Portugal. The boat sails very fast in the second part of the Bay of Biscay crossing.

The English Channel upwind and the Thames downwind
Maserati Multi 70 enters the English Channel before dawn on 22 February. The 35th day of navigation begins between Cornwall and Brittany and continues towards the southern coast of England, before resuming the tacking sequence along the coastline, with a freezing cold wind to negotiate.

The following day, early in the morning, the trimaran enters the Strait of Dover and turns the south-eastern end of England to go up the Thames estuary up to the Queen Elizabeth II Bridge.
The finish line is crossed on February 23rd at 13.20 UTC.

The challenge was supported by Maserati, the main sponsor that gives the name to the trimaran and Aon as co-sponsor, along with the official supplier for the clothing, Ermenegildo Zegna.

A special thanks also to Boero Bartolomeo S.p.A. and Contship Italia Group.