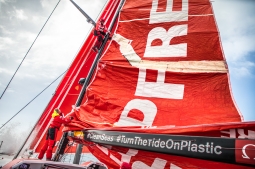 Team Brunel has hung on to the Leg 7 lead following an attack on the top spot by Dongfeng Race Team as the leaders get within 1,000 nautical miles of the finish line in Itajaí, Brazil.

Charles Caudrelier’s Dongfeng actually passed Brunel for a brief period overnight, profiting from the inside track as the two boats do battle around 700 miles east of Argentina.

But a slightly better angle on the wind and well timed gybe gave Bouwe Bekking’s Brunel the advantage, and at 13:00 UTC the yellow Dutch boat was back in front with a slim 13-mile buffer.

“Capey (navigator) was like a hawk last night, drinking one coffee after another,” said skipper Bouwe Bekking.

“You gybe too early, you lose to Dongfeng. You gybe too late, you lose as well. It was a bit of trade off, further to the east potential better pressure for us, but being further to the left like Dongfeng, you get a better shift as the wind rotates anticlockwise around the high pressure system.

“But I think we nailed it perfectly, and when we gybed we could see far on the horizon behind us a small masthead light…The 'enemy' was behind us, a big relief.”

Third-placed team AkzoNobel is just 70 miles back, keeping them firmly in contention as the 7,600-mile leg from Auckland enters its final few days.

As Leg 7 entered its third week, the relentless punishment dished out to the teams in the Southern Ocean and South Atlantic that resulted in Vestas 11th Hour Racing being dismasted and MAPFRE and Turn the Tide on Plastic slowing to deal with breakages, continues to take a toll.

On-board Brunel, Bekking’s crew are hoping that they can make it to the finish line not only in first place, but in one piece.

“Everyone’s really willing the finish to be here, especially hearing about some of the damage the other boats have sustained,” boat captain Abby Ehler said.

“We’ve had a slight issue with our rudder which we fixed, but there’s still a long way to go. It would we amazing to win this leg. We haven’t had a sterling performance in the race so far, so to win would be exceptional. Fingers crossed nothing goes wrong with the boat between now and the finish.”

Caution is running through the fleet as the exhausted teams nurse their Volvo Ocean 65s north towards Itajaí, trying to find a balance between speed and safety.

“The more experienced guys on board have been saying to take it easy on the boat and on the rig,” AkzoNobel bowman Brad Farrand said.

“So we’ve been going a bit more cautiously to make sure we don’t come a cropper. We’re constantly looking up the rig, making sure there’s not too much movement or too much bend.”

Two days after having to stop near Cape Horn for 13 hours to make repairs to their torn mainsail and damaged mast track, overall race leaders MAPFRE finally have a full suit of sails up.

Xabi Fernandez’s team had been forced to sail with only headsails for the past 48 hours to allow for their repairs to bond, but easing winds gave them the chance to hoist the mainsail once more.

“We’ve been pretty lucky with the weather, it’s been mostly downwind, but now it’s getting lighter so hopefully we can sail with the full mainsail and it keeps in one piece,” MAPFRE boat captain Antonio ‘Neti’ Cuervas-Mons said.

“It looks pretty good, the guys did a great job fixing it. The track looks perfect too. Now we have to be a bit conservative to make sure it’s not under too much load.”

Similarly, Turn the Tide on Plastic has been nursing their mast, sailing with a reduced sail plan since discovering a problem with one of the spreaders (a horizontal strut that helps the rigging support the mast) had seen it shift position.

“We’ve got a plan in place to try and get the spreader either back into position, or to match the other spreaders on that side of the rig,” said boat captain Liz Wardley.

“Looking at the positives – on port tack we’ll be able to use masthead gear and a full main, and we could sail on starboard with reduced sail plan. At least we can sail to Brazil and try and stay in front of MAPFRE, who are just under 100 miles behind us.”

Subsequent to that quote, the team is reporting the plan worked and they are sailing again at full power.

Meanwhile, Vestas 11th Hour Racing is working through logistical options to get its boat from the Falkland Islands to the Itajaí in time to step a new mast and be ready for the start of Leg 8.

And Team SHK/Scallywag continues its long approach to the Chilean coast following the tragic loss of John Fisher. Landfall is expected early next week. The team has posted a touching tribute to ‘Fish at: www.facebook.com/scallywaghk/videos/1737620402969776/