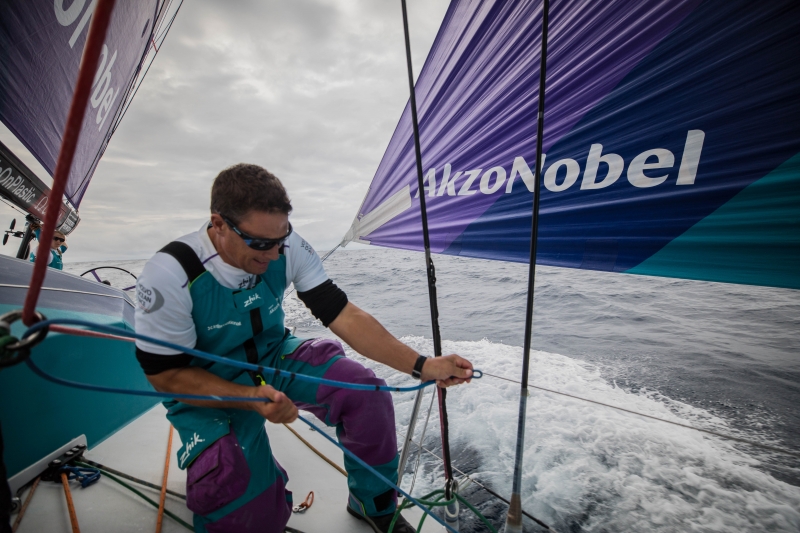 Team AkzoNobel and SHK/Scallywag are the big winners over the past 24 hours as both have had a relatively fast transition through the doldrums, allowing them to gain about 100 miles on the chasing pack, which have suffered through some painful moments.

Dongfeng Race Team and MAPFRE have had the worst of it. Languishing for hour after hour in extremely light and variable winds, while at the same time AkzoNobel and Scallywag were hurrying south at speeds up to 20 knots.

In the middle, Team Brunel and Turn the Tide on Plastic made their escape ahead of the final pair and at 1300 UTC on Saturday find themselves making good speed chasing down the leaders.

The next 24 hours look to be slightly more settled with the fleet racing south in moderate westerly winds. But by Sunday night (UTC), the leaders will be bumping into the second half of this doldrums crossing.

This looks to be a more complicated transition than usual, with cyclone activity to the south of the fleet disrupting the normal weather patterns. It will make the start of the week extremely challenging, and there is likely to be some kind of compression in the fleet with the back markers making gains as the leaders slow.

Regrettably, non-safety communication with the fleet has been disrupted since Friday evening UTC. Inmarsat confirms that it is currently experiencing an outage of its I-4 F1, L-band satellite, which covers the Asia Pacific region.

The cause has been identified as a spacecraft altitude control issue. Inmarsat is currently implementing the specific recovery activities to establish a safe return to normal operations as soon as possible.

This has impacted the On Board Reporters being able to send media off the boat so the RAW section of www.volvooceanrace.com is not being updated.

However the safety of the fleet has not been affected by the outage as Race Control is still able to track the boats and send basic messages to the fleet by email via an alternative Inmarsat satellite.