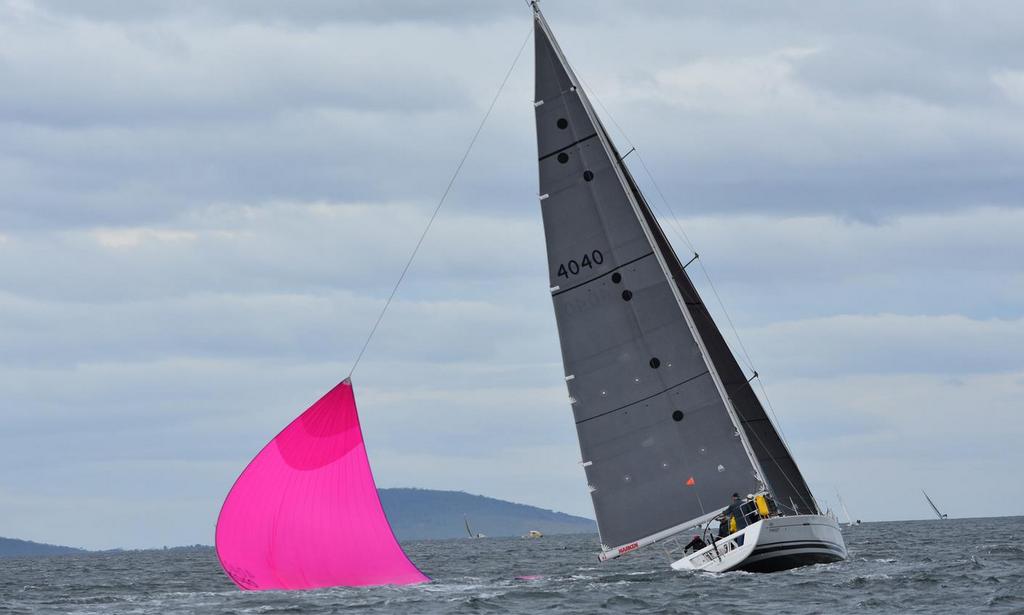 The Protagonist trawls her famous pink spinnaker in the Crown Series. It was recovered without damage. Photo Jane Austin.

Out of control spinnaker broaches, capsizes, a collision between two high profile yachts and a subsequent disqualification and a man overboard (briefly) situation have marked the opening races of the Crown Series Bellerive Regatta on Hobart’s River Derwent.

All this happened as westerly winds gusted to 30 knots during Friday’s keelboat twilight race and north-westers to 25 knots during todays’ full day of spectacular racing for keelboats, SB20s, International Dragons and a multitude of off-the-beach skiffs and dinghies

The regatta, Tasmania’s biggest for keelboats, sports boats and off-the-beach skiffs and dinghies, began with a Friday evening twilight race for keelboats with all classes contesting back-to-back races on the Derwent today.

Friday’s twilight race saw a big collision between Toby Richardson’s X&Y and Scott Sharp’s Crusader, resulting in the retirement of X&Y and the subsequent disqualification of Crusader from race one.

Both yachts were back racing yesterday with Crusader notching up a win and X&Y two second places in the Racing division.

Overall, after five races (one on Friday, four yesterday), Wayne Banks-Smith’s Farr 40 is heading the standings in both PHS and IRC categories while Whistler, David Aplin’s MBD36 leads AMS scoring.

Competition for the SB20 State championship, being sailed within the regatta, is close after four races, with Porco Rosso (Elliot Noye) one point ahead of Pinch (Frazer Read). Team Musto (George Peacock) is third, Export Roo (Michael Cooper) a close fourth.

In the State championship for International Dragons, also part of the regatta, prominent SB20 skipper Andrew Blakney has switched successfully to the Dragons, winning all four races with Wicked.

The big fleet in the Cruising with Spinnakers division has been split into three divisions. After three races Zephyr (Ian Johnston) is leading in division one, Footloose (Stewart Geeves) in division two, Pinta (Dan Ford) in division three, winning all races so far.