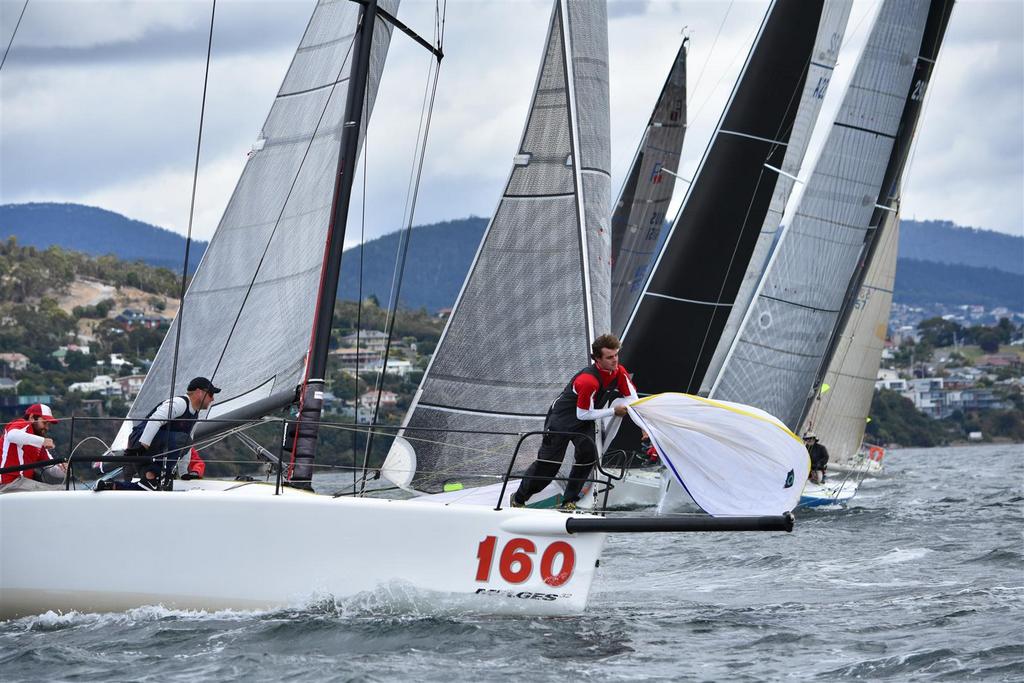 Tasmania’s champion sailors in the one-design SB20 and International Dragon classes were decided on the River Derwent as part of the weekend’s Crown Series Bellerive Regatta.

Tasmanian champion in the high performance SB20 sports boat class is Frazer Read, sailing Pinch, while the perennial Dragons, once an Olympic class, went to Wicked, skippered by Andrew Blackney.

Read is a former ‘gun’ sailor in the iconic Sharpie class while Blakney is also a regular SB20 helmsman.

Racing on most courses was delayed for an hour this morning, but a south-easterly breeze filled in to 18 knots by midday before fading away mid-afternoon.

The entire fleet in Division 2, Sailing with Spinnakers, failed to finish their last race while the last for the SB20s was abandoned.

Regatta manager, Vice Commodore Ian Stewart was delighted with this year’s event, with double the number of boats in the Racing Division and an increase in off-the-beach entries, especially in Sabres, Sabots and 29ers.

“Competing in the big Racing Division, especially at the rounding marks, was amazing,” added Stewart who steered his own boat, the Mumm 36 TasPaints.

Wayne Banks-Smith, one of Hobart’s best-known yacht owners, steered this Farr 40 War Games to line honours in all seven races for the Racing Division, winning the PHS and IRC handicap categories on corrected time.

In PHS, War Games’ winning margin was just .5 points from Prion (John Dryden) which excelled on day three, scoring two wins and a seventh place. Cromarty Magellan (Richard Grant) was another point back.

In the IRC category War Games won five of the seven races on corrected time with Whistler second and B&G Advantage third.

In Cruising with Spinnakers Division 3 all five races were completed, with Craig Escott steering Commbank to victory from Pinta (Dan Ford) and Alley Oop (Alan Nelson).

A small fleet of boats from Port Dalrymple Yacht Club at Beauty Point travelled down the Midland Highway to contest the Trailable Yachts division, with Andrew Jones’s Shrinkedge going home with the trophy after placings of 1-2-1-3.