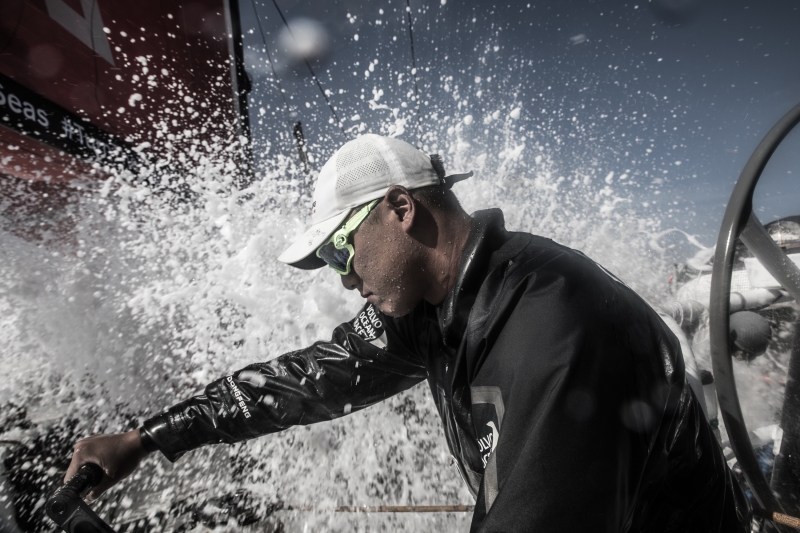 Vestas 11thHour Racing and overall race leaders MAPFRE were today carving out a route just 20 miles off the coast, while Turn the Tide on Plastic, the most easterly team, were a further 70 miles out to sea.

Chris Nicholson, watch captain on team AkzoNobel, revealed that the trio to the east are searching for an extra boost from a reverse current.

“We’ve had our eye on an eddy for about a week now, and we always said that if the breeze lined up then it could be an option,” he said. “It’s obviously what Dongfeng, Turn the Tide and us have gone for. It’s good for the team to be out at the front but the key will be keeping that up day after day. We’re unproven in that department so far.”

Just a few miles further back, Turn the Tide on Plastic were forging ahead under the guidance of skipper Dee Caffari and navigator Brian Thompson, who replaces Nico Lunven on this leg.

“It’s going well – we’re in sight of every boat,” said veteran ocean racer Thompson. “It’s been hard sailing with a really windy reach out of the heads then a lot of heavy air downwind last night,” he added. “We’re still in touch with everyone and that’s all we can hope for right now.”

The early pace is set to continue over the coming days as the fleet charges north, powered by favourable breeze resulting from a high pressure system over central Australia and a depression forming over New Zealand.

With such good conditions to look forward to the fleet could reach the Solomon Islands, east of Papua New Guinea, and the notorious Doldrums within a couple of days.

Until then, the teams are rolling the dice in a bid to get any advantage they can over one another early in Leg 4.

“It’s been non-stop over the last couple of days,” Vestas 11th Hour Racing’s Stacey Jackson said. “We’ve been doing some short gybing with all seven boats crossing back and forward. It’s only in the last few hours that we’ve spread out a bit. Time will tell which side will pay.”