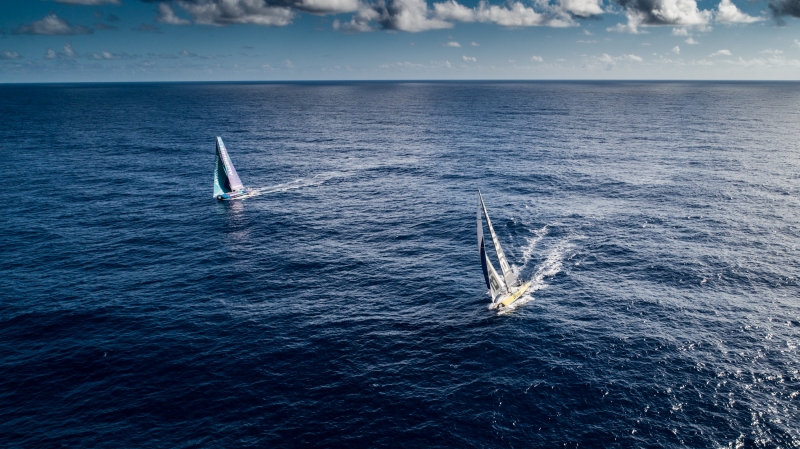 Over the past 48 hours each team has thrown their cards on the table, lining up west to east and committing to the routing they think will best fire them towards the steady, favourable breeze the trade winds offer.

Team Sun Hung Kai/Scallywag plumped for the most westerly position, setting themselves up around 120 miles off the Brazilian coastline.

Forty miles further out to sea, and on the same parallel, Turn the Tide on Plastic were the most easterly boat, pinning their hopes on being the first to pick up the new breeze when it arrives in the next 24 hours.

Splitting the difference, and with the narrowest of advantage, just slightly north of their rivals, Vestas 11th Hour Racing had usurped Turn the Tide on Plastic from the top spot at the 1300 UTC position update.

Turn the Tide on Plastic skipper Dee Caffari said she was willing to lose out temporarily in favour of a better position for the new breeze.

“Yesterday was all about making short term losses to make long term gains,” she said. “That is what I was telling the team as we pushed out to the east while it was easy to gain miles in that direction.

“Today we are dealing with a sequence of rain clouds as best we can. Some have a shift in them and some carry just an increase in pressure. We hope the latter are only for us so we can accelerate on our competitors while in the cloud. Fingers crossed for some lady luck in the clouds we encounter on this leg.

“We believe, with the exception of random cloud activity, that this is us on starboard for a very long time.”

Simeon Tienpont’s team AkzoNobel was one of the teams that managed to benefit from a cloud, overtaking Team Brunel and Scallywag overnight.

“The big difference is how you manage the clouds,” AkzoNobel’s Chris Nicholson said. “We made a huge gain on Vestas and MAPFRE then lost it all in a cloud. In a straight line and with the same breeze there’s not much difference between the teams – the deciding factor is getting through the clouds.”

Meanwhile on Team Brunel, thoughts are already turning to the impending crossing of the Equator for the fourth time in this edition.

Maritime tradition dictates that those who haven’t crossed the Equator before must make an offering to King Neptune.

Brunel’s only inductee on this leg is Australian Olympic silver medallist Nina Curtis – and the crew are already enjoying the anticipation.

“Nina is getting a bit worried about King Neptune's visit, even though it is still days away,” Brunel skipper Bouwe Bekking said. “The guys love to wind her up. We will make sure she doesn't lose all her hair…”

The next 24 hours are so crucial to the outcome of the leg that the race tracker has gone live, giving race fans real-time information about the position of the boats.