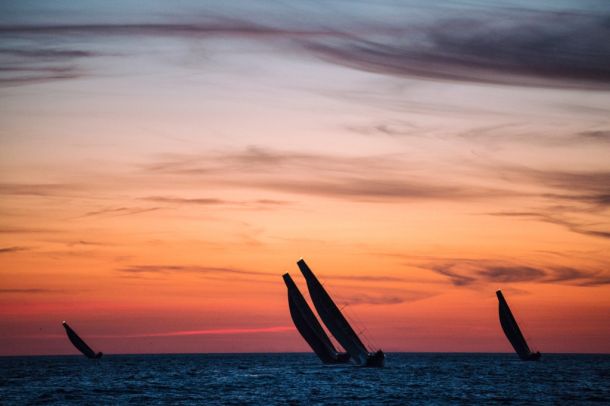 THE HAGUE, Netherlands, June 18 – The chase to The Hague is gathering momentum as the Volvo Ocean Race Leg 9 fleet split north and south this morning, in search of the best coastal breezes to take them to the famous, old Dutch port.

The Hague, or to be more precise its harbour of Scheveningen, is hosting a pit-stop on the way to Gothenburg, Sweden, the final leg destination which the fleet will reach early next week.

The city has organised a large, impressive Race Village to host the many thousands of fans who are expected to converge on it later this evening. The current estimated time of arrival here is around midnight local time/2200 UTC, but no points are awarded for this part of the leg.

The boats will re-start their course to Gothenburg from midday local time/1000 UTC onwards on Saturday (June 20) from The Hague in the order they arrive tonight/early tomorrow.

They will be released to sail the remaining 480 nautical miles (nm) of the leg to Gothenburg with the same time advantages/deficits on their rivals that they took into The Hague.

By midday today, it was anybody’s guess which team would reach The Hague first and gain the time advantage.

Dongfeng Race Team (Charles Caudrelier/FRA) have seen things differently. They headed north and have clung to the English coastal side of the English Channel, with MAPFRE (Iker Martínez/ESP) and Team Brunel (Bouwe Bekking/NED), just astern of the Chinese boat.

Which group has their tactics right remains to be seen, however, the wind speed at midday today was certainly stronger in the north (see panel above).

The northern group will need to alter course to the south later this afternoon to reach The Hague and avoid an excluded Traffic Separation Scheme that is on their probable line of attack.

Team Brunel (27 points), Dongfeng Race Team (29 points), MAPFRE (31 points) and Team Alvimedica (33 points) are all scrapping desperately for position with the two remaining podium positions still there to be won now that Abu Dhabi Ocean Racing have all but secured the overall trophy.

MAPFRE’s Spanish sailor, Rafael Trujillo, probably summed up the situation best: “There’s everything to win and nothing to lose.”

The seven-strong fleet is expected to arrive in the Swedish port on Monday (June 22) afternoon to complete the offshore racing.

The final event of the Volvo Ocean Race 2014-15, the 12th edition of the 41-year-old event, will be the Inmarsat In-Port Race Gothenburg on Saturday, June 27, drawing to a conclusion nine months and more than 38,739nm covered, visiting 11 ports and every continent.