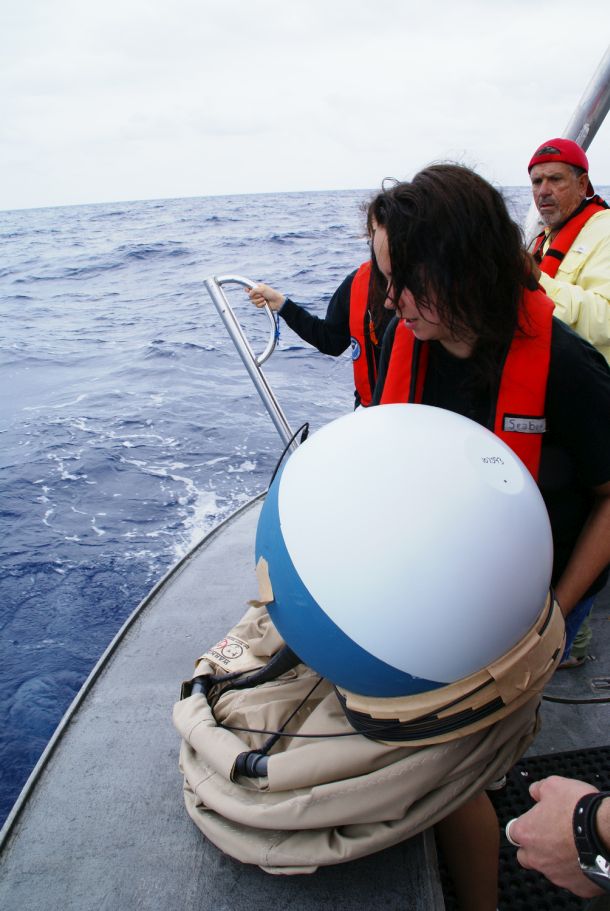 NOAA buoys will be deployed by VOR crews in the Southern Ocean.

AUCKLAND, New Zealand, March 12 – Volvo Ocean Race’s six-strong fleet will be more than simply racing on Leg 5 from Auckland to Itajaí after setting off next week – they will be assisting in an important environmental project to provide vital data from the Southern Ocean.

If you’ve ever sailed aboard a ship, or checked a weather report before going to the beach, then you are one of many millions of people who benefit from ocean observations.

The U.S.-based National Oceanic and Atmospheric Administration (NOAA) collects ocean and weather data to provide mariners with accurate forecasts of seas, as well as coastal forecasts and regional climate predictions. It takes a lot of effort to maintain these observations in all of the ocean basins to support these forecasts, and NOAA can't do it alone. Partnerships are critical to maintaining a network of free-floating buoys, known as drifters, and NOAA have asked the Volvo Ocean Race fleet to assist them on the forthcoming leg.

The race greatly depends on accurate predictions of ocean currents and marine weather. Their sailors’ lives can depend on it.

The fifth leg of the race will depart Auckland and travel through the treacherous waters of the Southern Ocean before rounding Cape Horn and ending in Itajaí after a 6,776-nautical mile journey.

All six of the Volvo Ocean Race teams will each deploy a drifter during the fifth leg of the race, in the Southern Ocean – a region oceanographers don't get to visit regularly, but one that is critically important to observe.

“The Southern Ocean is poorly sampled compared to other ocean basins because it is so remote from most shipping lanes where observations are collected,” said Dr. Rick Lumpkin, Director of NOAA’s Global Drifter Programme. “However, it plays a critical climate role in the global conveyor belt circulation and links the Atlantic, Pacific and Indian Oceans, so it is extremely important to observe currents and temperatures there.”

The operations centre of the Global Drifter Programme, housed at NOAA’s Atlantic Oceanographic and Meteorological Laboratory in Miami, continuously seeks opportunities for deployments in remote.

Martin Kramp serves as the ship coordinator at JCOMMOPS, a support centre of the Joint Technical Commission for Oceanography and Marine Meteorology of World Meteorological Organization, and UNESCO’s Intergovernmental Oceanographic Commission.

“Organised ocean sailing events, such as races and rallies, are a new component of growing importance in volunteer ocean observation,” explained Kramp. “We have shown the feasibility and efficiency of such partnerships in the last months and we are very happy that the Volvo Ocean Race is collaborating with us as a part of the current race.”

Knut Frostad, CEO of the Volvo Ocean Race, said: “The oceans are our race tracks and we are delighted we can assist with the building of knowledge about them in this way. I look forward to following the data from the drifters that our fleet drops as they race through the Southern Ocean, passing some of the most remote locations on the planet.”

Each of the six racing teams will deploy their drifter at the same predetermined coordinates.

As soon as they are in the water, they will drift with ocean surface currents and transmit data on surface pressure and ocean currents through a global satellite network.