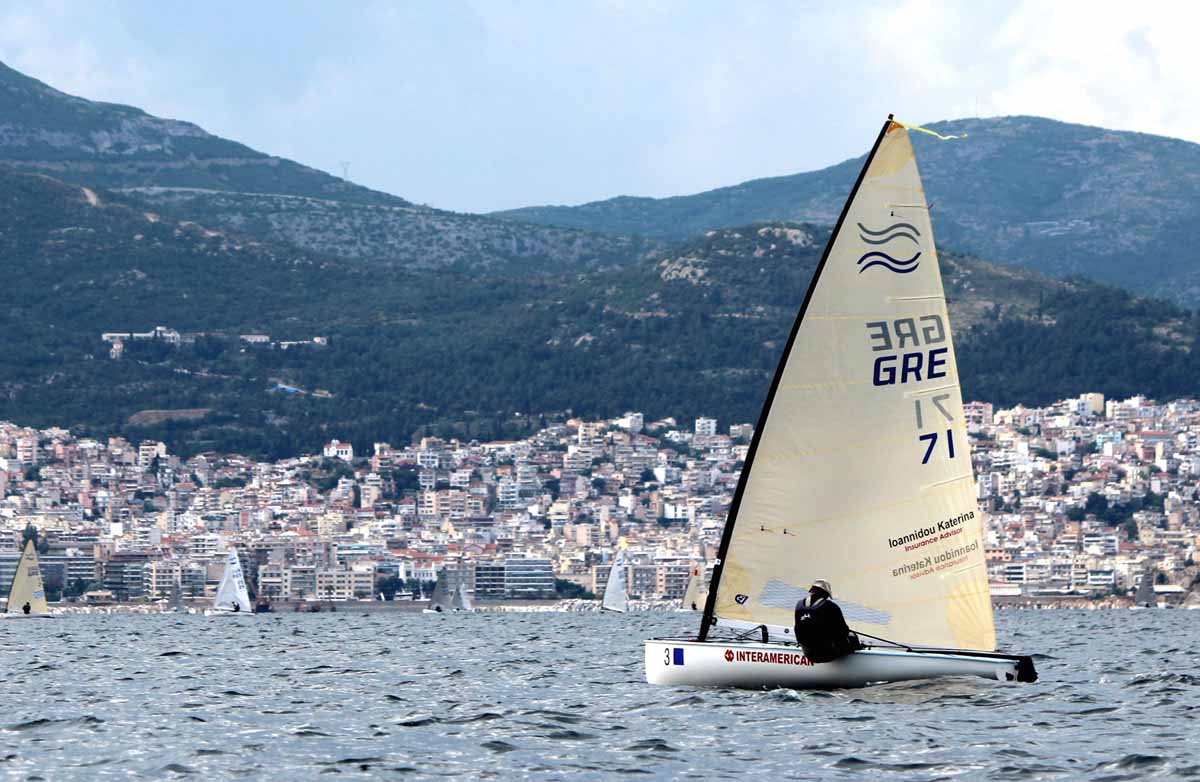 Vladimir Krutskikh (RUS) has taken a one point lead at the Finn World Masters in Kavala, Greece after the only scheduled race was completed late in the day. Yuri Tokovoi (UKR) is up to second while Martijn van Muyden (NED) drops to third. Race wins went to Marc Allain des Beauvais (FRA) and Vladimir Butenko (RUS).

The day started with the Annual Masters Meeting, but the sailors knew then it would be a difficult day with the race area staring at the gathering with a mirror like sea. A breeze started to appear early after noon, but there were also dark, looming clouds, foretelling a race officer's nightmare, peeking over the mountains inland. And so it was. Racing was initially postponed for an hour on shore before the fleet went afloat. Then there was a series of non-starts while the wind clocked left under a dark cloud. One race even got as far at the windward mark before being abandoned.

Despite many reservations, Yellow group got away in a reasonably stable wind that remarkably lasted for the whole race with just a slight right shift at the end of the first upwind. Davourlis Panagiotis (GRE) held a comfortable lead at the top mark after hitting the right hand corner to left a useful lift off the land. Marc Allain des Beauvais (FRA) rounded in third and moved up to second downwind. He trailed Panagiotis all the way until the final downwind mark before the final short beat to the finish. Unfortunately, The Greek dropped his mainsheet and the Frenchman attacked and passed to take the race win. Krutskikh crossed in third to take the overall lead.

Allain des Beauvais said, “I wanted to go to the right. The boat end was better. I was just behind Henry [Sprague]. But about 30 second before the start the wind shifted on the left, so we went and tacked immediately, but the other guys had more pressure so I was struggling against Davourlis and had to take a few hitches up to the layline to keep clear air. But I moved up to third. Davourlis was so quick, I couldn't catch him. On the second downwind, he went too much left but he was still ahead, but when we went up the final upwind, his sheet jumped out of the cleat and I saw that and dug my nails into the straps and just passed him, and got a nice wave and got a few more lengths and then it was over. You really need luck here. I really can't say more than that. C'est la vie.”

A philiosophical Panagiotis said, “It was a difficult day with many good sailors and very shifty weather. But it has promised much fighting for the next few days.”

In the Blue group Vladimir Butenko (RUS) led at the first mark from the right, continuing the Russian good form, with Tauras Rymonis (LTU) and Antal Gabor (HUN) in pursuit. He eventually took the win from Rymonis and Giacomo Giovanelli (ITA). The leaders in the group also had to contend with the tail end of the Yellow group as the fleet converged at the last upwind mark.

Butenko described his race, “It developed very simply. The choice was either to go out to sea or inshore, so I took inshore route under the cloud and it was easy. That's about it. I rounded the top mark in first and led until the second upwind when Taurus passed me. He is a much better racer than me. I was second downwind, with Pata [Gabor] also very close and the Italian. I believed I was third or fourth just 50 meters before the finish and then I got lucky. I won by less than a meter from Taurus. All four boats finished within 10 seconds. It was nice. I would say than Björn Allanson is a very good coach. After a terrible day yesterday he helped me to recover and take the win. He's an excellent coach both technical and humanitarian.”

More chaos and carnage ensued at the Annual Finn Masters Dinner at the Batis Multiplex. Finn sailors love a social occasion, but even the polite hostesses were heard to mutter “No one is doing what they are supposed to be doing here.” A quiet explanation was needed that this was a gathering of Finn sailors and that this was par for the course. Finn style.

Racing in Kavala continues until Friday with two more race scheduled on Thursday from 11.00. You can follow live race by race finishes on the event website each day at: http://www.finnworldmaster.com