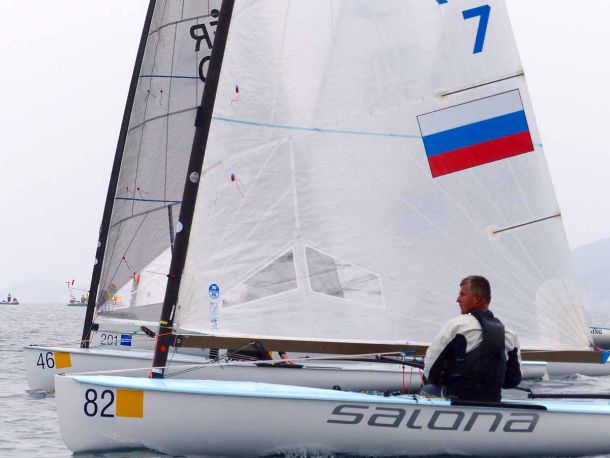 Vladimir Krutskikh (RUS) has extended his lead at the Finn World Masters in Kavala, Greece to six points after the hardest day's sailing many here can remember. Yuri Tokovoi (UKR) and Martijn Van Muyden (NED) are on equal points in second and third, but anyone in the top seven can win a medal, and anyone in the top five can take the title. There is still a lot to play for in Kavala.

Thursday was the day everything changed. The Greece that everyone had come to love for the past 10 days was gone. The question in everyone's mouths today is “What did they do with Greece.” The sailors certainly went to sleep last night in Greece, but this morning they could be forgiven for thinking that they had woken up in northern Europe. Gone was the sunshine and high temperatures and in was the rain. It was a cold, damp day on the water in Kavala, too cold for some, with incessant rain, low temperatures and a wind that could best be described as indecisive.

The wind had already clocked 180 degrees between 0 and 10 knots before the first attempt at a start was made. That was abandoned near the windward mark before further attempts were made after the wind settled down to something resembling unstable. The course was a minefield of holes and shifts and at the end of the day there were a lot of 'if onlys' being discussed over hot drinks and cold beers around Kavala.

At the end of the first race, the breeze kicked in to 15-16 knots and everyone hoped for a great second race, if slightly inclement. However the wind again had the last laugh, dropping to 1-2 knots at times and then flicking through 120 degrees as the fleet sailed the final downwind. Coming ashore the cold and tired sailors had been on the water for seven hours for two extremely challenging races, though those at the top had consolidated their points lead.

In Yellow fleet Dimitry Petrov (RUS) led all the way to record his second race win of the week from Marco Buglielli (ITA) and Taras Gavrysh (UKR). The second race turned into a battle between the top two overall, who put some distance between themselves at the fleet. Eventually Vladimir Krutskikh (RUS) took the win from Yuri Tokovoi (UKR) by less than a metre. Alexei Marchevsky (RUS) crossed in third.

In Blue Group, Laurent Hay (FRA) also scored his second race win of the week, leading from start to finish. He won from Marc Allain des Beauvais (FRA) and Andre Budzien (GER). In the second race there was a group fighting for the lead, with the win eventually going to Budzien from Hay and Aleksander Kuliukin (RUS).

Krutskikh said, “Today we had two really tricky races. The wind was very shifty and the clouds were very important. They were coming from left to right and and we needed to follow them closely. After four days the top 10 is still very close on points, but tomorrow starts a new regatta, One race and very important. We'll see what happens tomorrow. Now I will rest and not think about racing tomorrow.”

Buglielli had a great day, following up with an eighth in race 7. “For me it was a very good day. The fist race I started well, I played the shifts in the middle and I was second at the top behind RUS 711 [Petrov] and we stayed that way all the race. I tried hard but I couldn't pass him. In the second race, it was the same thing. I tried to play shifts. It was OK but I lost maybe 10 boats that came from the right at the top mark when I was in the middle. I got stuck in no wind. I continued to play and I gained some and then lost some. The wind was really crazy. Holes everywhere. In the end when the new wind came I lost a few boats but I ended eighth which is very good for me.”

“Overall I am happy with the week. I missed a few shifts on the last few days but I have had good speed and am pretty happy. Hopefully I will stay in the top 15, so that's good.”

After picking up a second yellow flag yesterday and having to retire from the race, Hay said he was keen to put in a good result today. In fact he had the best score of anyone. “This morning I was very angry because of the jury decision yesterday, so I go on the water very motivated and I wanted to have a very good race today. I knew that the title was finished for me this week, and I was disappointed.”

“So in the first race it's a bullet to me. I had a good battle with Marc Alain and I finished first. Then in the second race we were five or six boats having a very strange battle, with a big change in the wind, and the winner of that battle was Andre Budzien and I finished second so that was a good day for me.”

Racing in Kavala concludes on Friday the final race and the medal race for the Top Ten Plus (top 10 plus those on equal points with tenth). You can follow live race by race finishes on the event website each day at: http://www.finnworldmaster.com