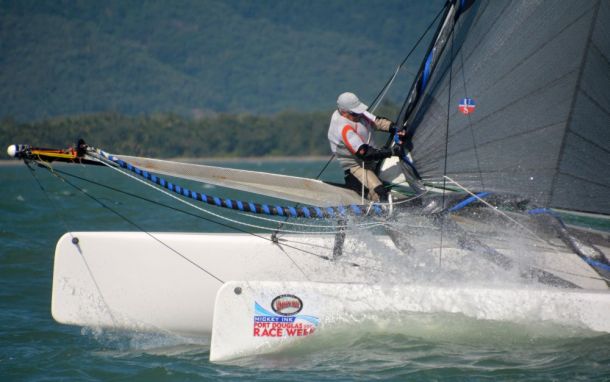 The bowman on Malice enjoys a wet ride during the passage race at Port Douglas. Photo Roger McMillan.

Wednesday was supposed to be a lay day at Port Douglas Race Week but because of Monday's bad weather, racing was scheduled. And most competitors are glad it was as Huey turned on a terrific day with 15 to 20 knot trade winds and a blue sky with occasional cloud.

Performance, Performance Cruising and Multihull divisions all did a passage race around Snapper Island while the J24s and sportsboats in Division 4 did windward-leewards.

It was Steven England's Thompson 7 Ketchup which was fastest in the first race of the day but they had to settle for third place on handicap, behind the J24 Port FM Mais Oui (Alf Fowler) and the Farr 727 Ruff Red (Becky Bower). In the second race there was little change at the top, with Ketchupagain fastest and Mais Oui first on handicap.

Despite their two handicap wins today, Mais Oui is in third place overall (after a 5th and 7th yesterday) behind two other J24s Kaizen II (Bruce Clark) and Fast Forward (Brian Dowling).

In the passage race it was again the beautiful Nacra 36 Malice, owned by local sailmaker Mal Richardson, which dominated the field. Churning through the 30nm course in 2 hours 11 minutes, the crew were back in the marina in time for lunch.

“It was a good ride,” Richardson said. “The wind had moderated a lot since yesterday. It was just perfect… brilliant.”

Malice leads the multihull division on handicap too. Colin Simpson's Seawind 1000 Indigo is five points behind, with the modified Grainger of Wazza Innes, Barefoot, bouncing back from a DNS yesterday to hold third.

It was certainly a day of champagne sailing for the leader in Performance Racing (over 9 metres). The big Oceanis 45 appropriately named Champagne and owned by Mal Pirret took just over four hours to complete the course and ended up with the treble – first, fastest and leading overall.

The minor places are being fought out by a couple of Farrs with the Phase 4 Volare 1 (Westley and Robson) beating the modified 11.6 Dusty Muzzle (Ron Knott) today after Knott lost a woman overboard on the beat to the first turning mark. The pick-up was superbly done and the boat was racing again within minutes. In overall points, the placings are reversed, with Dusty Muzzle holding second place. There are just three points separating the top three yachts.

The jib-and-main cruising boats took a bit longer than the ones who could fly kites. First back to the marina was Alan Littlefield's Bavaria 44 Dreamagic in 5 hours and 7 minutes. That was good enough for third place on handicap, behind Andrew Burford's Jeanneau 45.2 Turcana and Carl Barnett's Phantom Casuarina.

Full results are available at http://portdouglasraceweek.com.au/r/ and many more photographs from today and yesterday have been posted on the Australian Sailing Facebook page.