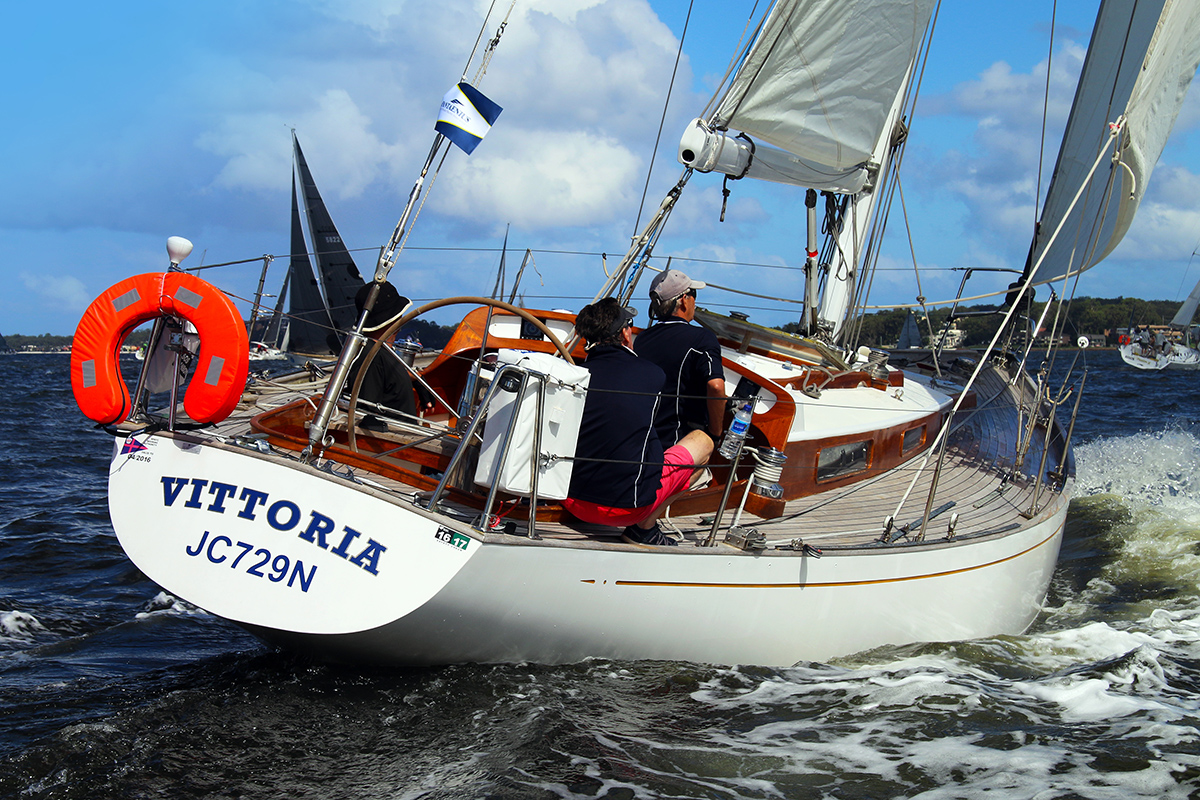 Amid the gleaming white fibreglass boats racing en masse at the Commodores Cup, stage one of the two-part 10th anniversary Sai Port Stephens, is the classic timber boat Vittoria cutting a wide path through the gentle Nelson Bay chop.

Built for the late and great Victorian yachtsman Lou Abrahams, the Sparkman & Stephens (S&S) 42 design is a head-turner among the record cup fleet, and owner Alan Reece is enjoying pushing the beauty around the bay courses in the 15 knot average sou’easters.

A bundle of hand-written and typed letters now in Reece’s possession describe how how Abrahams wrote to S&S requesting a minimum handicap rater for the 1971 Admiral’s Cup. He learned they were working on a 42-footer for a Lord in the UK and the designers suggested the two owners share the design cost, which they did.

Vittoria was built by Cec Quilkey in cold-moulded Oregon four diagonal planks building up to a hull thickness of one inch. It has an 8.8 tonne weigh-in but is only 30 feet at the waterline, thanks to the easily identifiable and fine curved S&S bow.

The boat’s first Sydney to Hobart race was only months after its launch in 1970 and its best performance in the famous bluewater race would be that race, fifth outright and seventh on corrected time. The boat went on to compete in eight more Sydney Hobarts, the last in 1978, plus the inaugural Sydney to Suva race in 1976. On the way back to Australia the boat accidentally hit and was then rammed by a cranky Sperm whale, smashing the rudder and sending the crew limping into Brisbane port for repairs.

Reece is only the fourth custodian of Vittoria and he knows with ownership comes a responsibility to preserve his piece of yachting history. “The previous owner did a beautiful refurb in 2010. Wooden boats soak up money…I’m yet to feel that pain.”

Now living in Pittwater on Sydney’s northern beaches, Vittoria is out racing weekly. It won the classic boat division at the 2017 Australia Day regatta and is doing the rounds of wooden boat shows, where invariably someone remembers Vittoria or wants to share their story with Reece of when they crewed on the boat sometime in the past 47 years.

“The enjoyment is the type of boat and meeting people through it, everywhere I go there are connections,” Reece says. “It’s beautifully made and I have to keep it nice. It does have mod-cons including electric winches so I can sail it short-handed, which makes it more usable.

“It goes well in big seas, steers like a car and doesn’t smash like the new boats, and I’m aiming to use it as much as I can; that’s what owning a boat is all about.”

The Commodore’s Cup and Vittoria’s series wraps up on Wednesday April 5, 2017.

Thursday is a layday and Friday marks the start of busiest half of the Sail Port Stephens on-water program when the NSW IRC Championship, NSW Super 12 Championship, Australian Sports Boat Championship and Performance Racing and Cruising Series commence. All racing concludes on Easter Sunday.