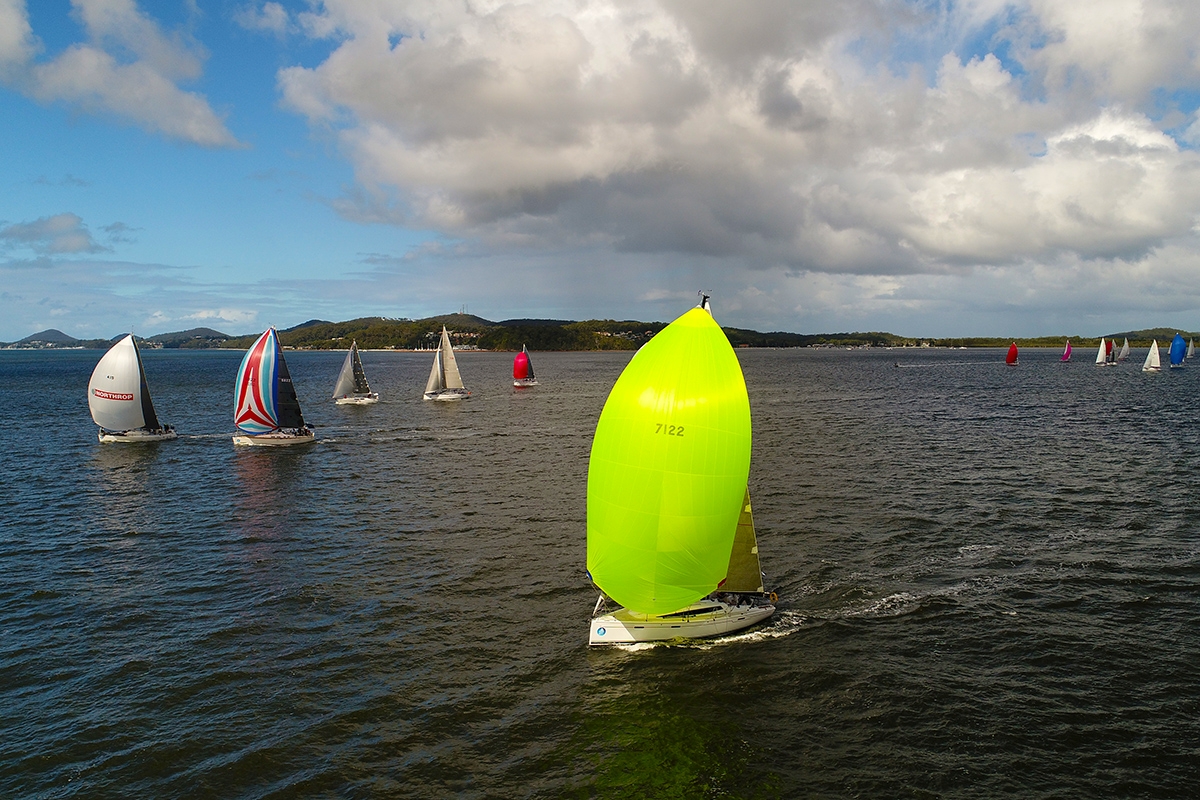 Peter and Drew van Ryn’s 25 year-old Sea Hawk took out the Commodore’s Cup division one pointscore by four points in their first regatta since 2011 and division two went to the wire, Dave Griffin’s Alfresco the victor on a countback.

The Commodore's Cup is the traditional Sail Port Stephens opener and usually a very straightforward three race series. For the first time in a decade protests were lodged post-race, organiser Paul O’Rourke commenting, “We’ve had nine years and two Commodore’s Cup races without a protest, and now we have two!”

There was plenty more drama. Three division one boats were OCS in the three knot tide at the start. Tom Woods’ super quick Toy Story, which is usually the lead boat, had to painfully work its way back against the current to restart behind the entire division two fleet.

Six division two boats were over at the start off the Nelson Bay breakwater. Three of those made a genuine attempt to return for another go but in the end accepted a five minute penalty from the race committee in lieu of restarting.

Classic boat Vittoria broke a steering chain shackle and owner Alan Reece found himself facing 50 oncoming boats with no steerage. The crew rummaged through lockers and found the spare steering post, setting up a manual system to get them out of trouble.

There was 5 knots of sou’east wind against tide at the lunchtime start, a quiet affair until the RAAF flyover to mark the 10th anniversary Sail Port Stephens. Midway through the final passage race kites were shredding in the gusts and a collision between division one boats Amante and Flashdance II rendered Amante’s race over, and sent them to the protest room to argue their case.

Flashdance was subsequently disqualified by the jury from race three and disappointingly for owner Dennis Cooper Amante sustained too much damage to continue its Sail Port Stephens series.

For van Ryn, today’s division 1 series win with his long-time owned Farr 44 from Cronulla Sailing Club was unexpected. “We haven’t done a regatta since 2011, we’ve just been doing club racing and in that time we’ve built the crew up and have a fantastic group of people who achieved what we achieved today. I’m here with my son and sidekick Drew; it’s a pretty special moment for an old dad,” Peter admitted.

“We were fourth in the series yesterday and I thought if we did well today we might be able to hold onto fourth, or perhaps snake a third. I was lost for words when the blokes from Black Sheep called over the dock and told us we’d won.

“Sea Hawk was 25 last month. I’ve had her 12 years; she’s an amazing boat and she keeps looking after me. We are so happy with the event organisation; everyone is so helpful,” van Ryn added.

Second overall in division one was Huntress and third was Rob Aldis’ stunning Azuree 46 Kayimai from Middle Harbour Yacht Club. Philip Grove’s Sydney 39cr Huntress almost missed today’s start when they were literally stuck in the mud in their berth 20 minutes before the gun fired.

“That’s fantastic,” said Dave Griffin on being told of his Dehler 36’s division 2 pointscore triumph. “We won’t be here next year with Alfresco; we have a wedding for one of our children then we are taking the boat to the Great Barrier Reef.

“We had a range of conditions today, no wind at the start then it came in and the race restarted in 10-14 knot average winds. Lucky we bought our tickets to the presentation dinner; we were happy to cheer on whoever won!”

The largest Jeanneau fleet to compete at Sail Port Stephens have enjoyed a terrific series on and off the water. Peter McClelland’s Macscap took out the separate Jenneau pointscore and Peter Lewis won the final race with Lu Lu Belle, a Sail Port Stephens ‘lifer’.

Last weekend en route the Sydney boats rafted-up with Lu Lu Belle in Pittwater, Lewis recalling, “some say up to 400 boats were rafted up….maybe less…and everyone was fed from my boat with the chandelier up.”

A number of Jenneaus headed north to the Hunter coast in company on the Sunday, striking 6m waves and 25 plus knot winds. “Some say it was rockier on the Jenneaus than you would expect; some even spilt their café lates,” Lewis jested.

Thursday April 6 is a layday and Friday marks the start of busiest half of the Sail Port Stephens on-water program when the NSW IRC Championship, NSW Super 12 Championship, Australian Sports Boat Championship and Performance Racing and Cruising Series commence. All racing concludes on Easter Sunday.