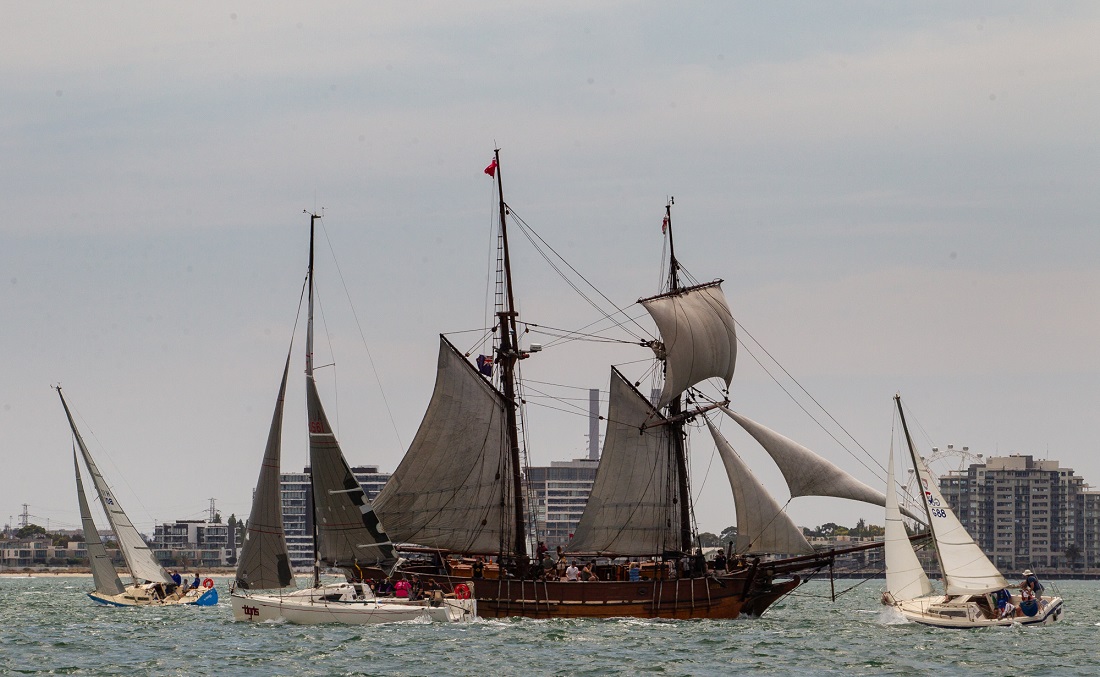 Races 3 and 4 of the Port Phillip Women’s Championship Series, hosted by the Royal Yacht Club of Victoria were held on Port Phillip today and the women sailed two long courses in oscillating winds at both ends of the spectrum on a gusty Melbourne day.

With the Shirley Freeman Memorial Sailing postponed early in the series due to high winds and rain squalls with big gusts, it translated to the first race of the day, starting from 11.00am, followed straight after by the Val Hodge Trophy on the same course.

Jones, skipper of Salamander III finished second in PHS, which decides the pointscore, and won both IRC and AMS. She has fast become the boat to beat in the PPWCS and proved that in Race 1 – with two male ‘ring-ins’ aboard.

“We had Rissole (Chris Cleary – a past skiff champion sailor) and Sudsy (David Sudano, a prominent offshore yachtsman) on board,” Jones said after sailing her Adams 10 to victory. Sudano’s partner, Kristen Buckland, and one of Jones’ regular crew, was also aboard.

“It was a fantastic day and a long day, with two long sausage course races. It was gusty and fluky. We did three sausage courses for both races and had a good contest against the other Adams 10 (Serious Yahoo). When you have another boat pushing you along like that, you have good competition,” Jones remarked.

Jones said conditions were on the extreme side. “We had between 8 and 18 knots throughout the two races, with 30 degree wind shifts. It was quite tricky. It was the windiest day we’ve had during the series so far; the others have been very light,” she said.

During the second race an old Tall Ship was crossing the fleet on port, so several competitors were forced to go behind the ship, or tack. It diminished their chances of making the podium.

Jones agreed that the day’s results were very close in both races.

“We’re often similar in the results to Le Cascadeur – they are great competition for us – always up there in the results,” she said after finishing runner-up to the Leonore Eeckman helmed boat in the second race of the day, for the Val Hodge Trophy.

Jones also steered Salamander III to win IRC in that race and place second in AMS – a solid day’s performance for her crew. Cath Beaufort’s Up ‘N Go was third in both those categories – and was also third under IRC in the second race.

Le Cascadeur’s Leo Eeckman was pleased with her crew’s Val Hodge Trophy win, from Salamander III and Serious Yahoo: “It was quite windy and hard work – very tactical,” she commented.

“The first race, got off the start well and had a great spinnaker set at top mark, but we missed the port side mark rounding gate, so had to go back to round. Then we made the mistake of crossing the start line to finish – and it took us 20 minutes to realise, so we had to go back and finish,” Eeckman explained.

Lesson learned, Le Cascadeur’s crew made no mistakes in the second race and came away with vichttp://www.womenandgirlsinsailing.com.au/keelboats/portphilip2018-2019/tory. She also won AMS.

“We had a cracking start. It was challenging, as wind was up and down. We finished behind the two Adams 10s (Salamander and Serious Yahoo) over the line to win overall,” she said.

“It was a long day – after the first race we were thinking, ‘really, we have a second race to do’? But the crew did a great job, especially on the foredeck and mainsail, as it was hard in the shifty and varied winds,” she ended.

The 2019 PPWCS concludes with the Brighton Lady Skipper Series (BLiSS) hosted by the Royal Brighton Yacht Club on Sunday 28 April. The Club will also host the Presentation of the PPWCS and Nautilus Range Series, in which some PPWCS sailors are also competing, on Friday 24 May.