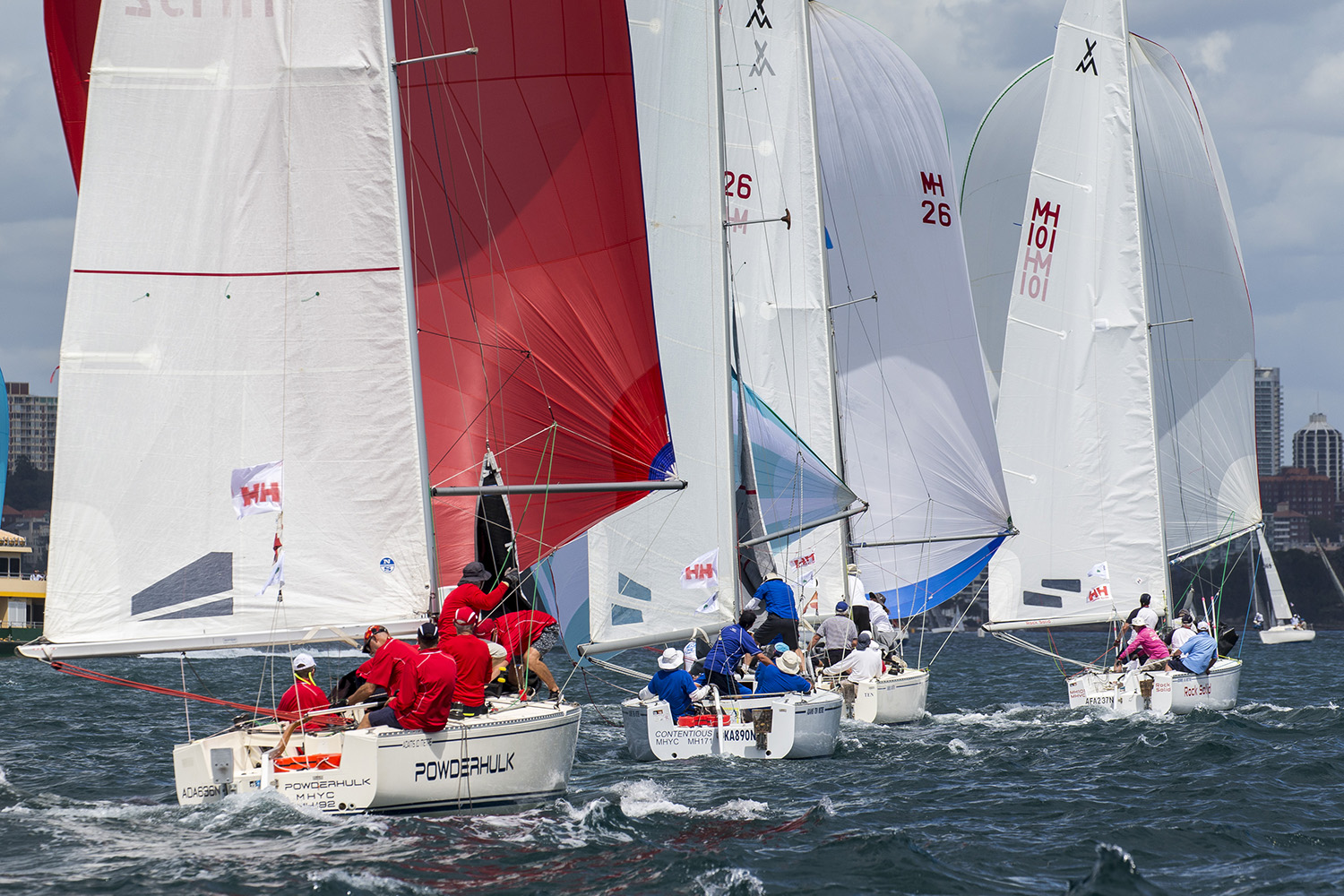 From the Harbour Bridge and the Opera House, all the way down to the Sound at Manly – boats, boats and more boats, as Middle Harbour Yacht Club’s well-named key event, the Sydney Harbour Regatta, did as its name implies – filled Sydney Harbour with racing boats of all shapes and sizes.

And as if that was not enough, the courses extended offshore where the Sydney 38s are conducting their Australian Championship on windward/leeward courses, joined today by the TP52s, plus other grand prix yachts broken into two IRC divisions, all battling for the spoils.

Yoti Sydney 38 Australian Championship
Racing was every bit as close as it was yesterday, but a new leader has emerged, with Alan and Tom Quick’s chartered The Goat, re-named ‘Outlaw’, toppling current NSW champion, Conspiracy (Peter Byford/David Hudson), from the top of the podium.

The Quicks have moved over from their Farr 40 and adapted ‘quickly’ to the Sydney 38 after a few years absence, Tom Quick saying, “We had crew returned from our Farr 40 today. Phil Armstrong, one of our trimmers and kite trimmer came along. He was the big change in our performance. It’s all about the crew – 100 percent it’s the crew that makes the difference.

“I’m hoping our main trimmer can join us tomorrow – he’s been away working – and give David Chapman a break. David’s been doing our tactics and trimming the main. He’s done a great job. It will give him a chance to just concentrate on the tactics tomorrow.”

In Race 5, it was Outlaw again, this time from Greg Croak’s Challenge from Toronto, with Calibre third. Race 6, and Outlaw won from Conspiracy by nearly a minute, with class newcomer, and MHYC member, Peter Sorensen (Advanced Philosophy) third. Results have Outlaw on top by seven points over Conspiracy and 10 in front of Calibre.

Quick said, “We did our best and it worked. We sailed in a bit more freshening breeze than yesterday, with the nor-easter getting up to around 13 knots offshore. “It was always close, especially on the first leg up to first mark in all three races. Staying in front is about working the boat as hard downwind as you do upwind.”

On the competition he commented: “Peter Sorensen (a former champion skiff and yacht sailor) came to grips with the boat today and were up with us a lot of the time, but Calibre was certainly our main competition today.”

In the other offshore classes, TP52 newcomer, Gordon Ketelbey (Zen) leads with three straight wins. A great result after the disappointment of retiring with damage from the recent Rolex Sydney Hobart.

Zen leads Gweilo (Matt Donald/Chris Townsend) and Sam Haynes’ Celestial, with 2008 and 2012 Sydney Hobart winner, Quest (Bob Steel) fourth – as he reacquaints himself with the boat he sold to Paul Clitheroe and repurchased recently.

On the Harbour
Over 160 boats across 20 diverse classes/divisions are taking part, from the NSW Championships in the Adams 10, Cavalier 28 and J70 to the many others.

Nine experienced Adams 10s went hard at it on Day 1. Patrick Delaney’s Powderhulk leads by a single point from Rob Clarke’s KickNChase and Raoul De Ferranti’s Lumine Lunae – the latter two on equal points, so close is the competition.

A buoyed-up Delaney commented: “It was very, very close. The starts were very tight and the lead swapped a lot. KickNChase is the Australian champion, so we’ll see if the little Aussie battlers can hold out against them.

“Tomorrow will be interesting, with the remaining three races. Today wasn’t easy – we didn’t see more than 10 knots on the Harbour. Race 3 was variable and died towards the end. Winds were very shifty. We’re hoping for a stronger breeze tomorrow – we go better in that.
.
“Backchat (in fourth) has come from Lake Macquarie and has a good crew – they could come good tomorrow. We have a history of starting well, but dropping off, we’ll see,” ended a laughing Delaney.

McPherson was rather tickled to find U2 in front: “A gorgeous day’s sail. We sailed one crew short and had two stand-ins, because three of my regulars couldn’t make it. We managed to get through, but I’m happily surprised we’re leading,” he said.

“Close racing, and especially at marks, but the day went smoothly. The lighter air made it easier for us. Centaurus is always the number one boat on scratch, they work like clockwork – we all measure ourselves on him, so it’s good to get a win up against them.”

This is the 14th running of the Sydney Harbour Regatta, conducted by MHYC, which is in the throes of celebrating 80 years. All competitors are flying Clean Up Australia flags from their backstays in support of Clean Up Sydney Harbour on Sunday, which is celebrating its 30th year. The late Ian Kiernan AO would be thrilled to see the legacy he left behind growing.

For full results in all classes all information: www.shr.mhyc.com.au