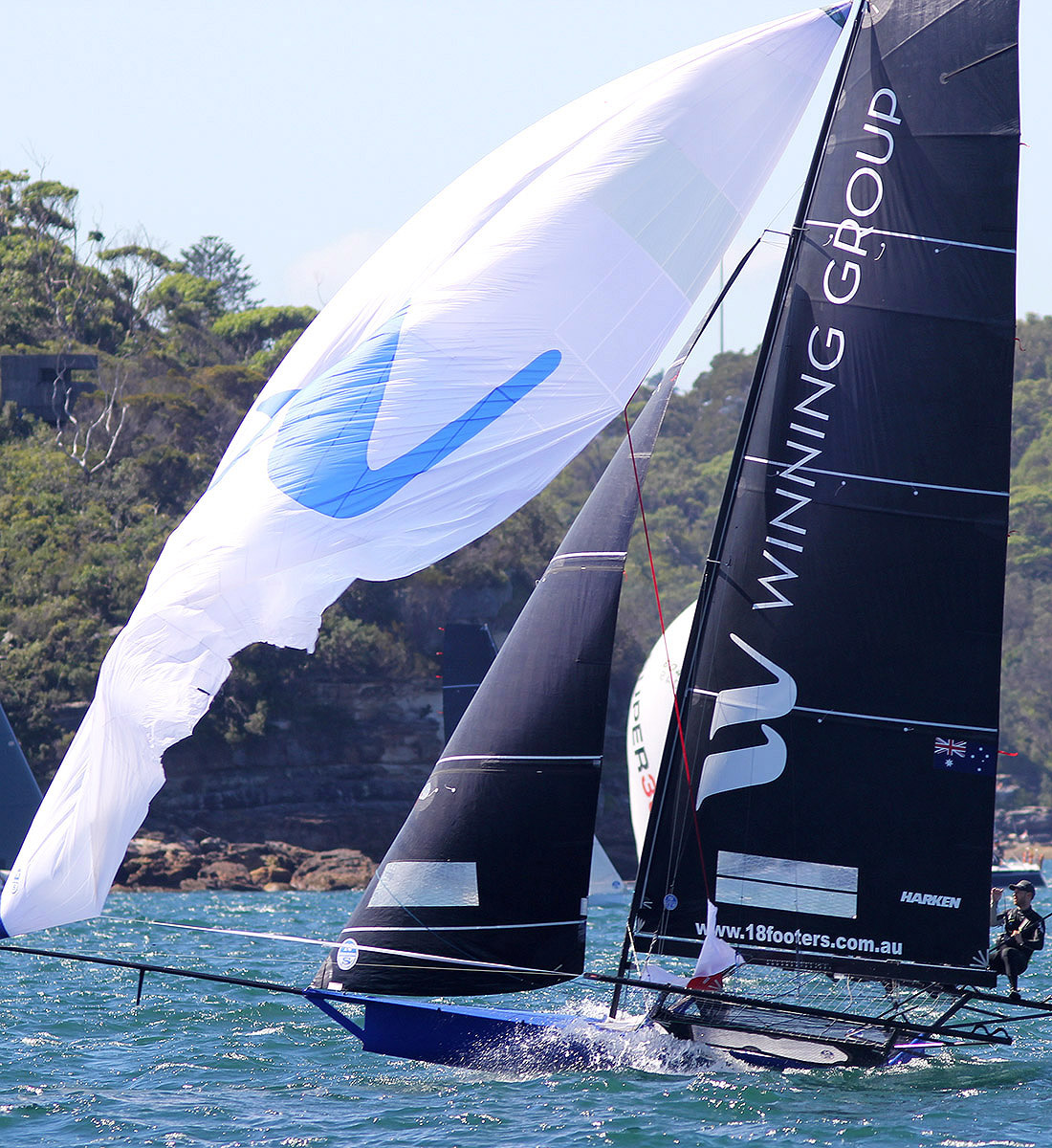 A torn spinnaker in an incident with a yacht robbed Winning Group of a possible victory in today's race. Photo Michael Chittenden.

After trailing Winning Group (John Winning Jr.) for half the NE course, Honda Marine (David McDiarmid, Matt Steven, Brad Collins) grabbed the lead when the Winning Group spinnaker was torn, in an incident with a yacht, and the skiff had to retire from the race.

Once in the lead, Honda Marine held a handy lead over the fleet and looked set for a good win, but Appliancesonline.com.au (Brett Van Munster, Phil Marshall, Kurt Fatouris) put in a wonderful last lap of the course to finish just 10s behind Honda Marine in a great finish for the large spectator fleet.

Australian champion Asko Appliances (James Dorron) came in fourth after being well back in the fleet on the first lap of the NE course.

Simon Nearn’s R Marine Pittwater produced another excellent performance to finish in fifth place, after being with the leading group throughout the race.

With protests pending from Race 1 of the championship, and another one today by Winning Group requesting redress, the pointscore won’t become realistic until after tomorrow’s hearing.

Following Honda Marine’s impressive win in Race 1, there was an expectation that the team would again be hard to beat in relatively similar conditions, but it was the Winning Group which led the fleet from the start until the incident with the yacht.

At the bottom mark, Winning Group had opened up a break over the fleet while Honda Marine had dropped back to sixth place.

Honda Marine was still trailing Winning Group by 15s as the fleet had returned to the top mark, but just as the spectators were settling down to watch a great race between the two champion teams Winning Group was put out of the race.

Skipper John Winning Jr. said later; “There was a yacht under motor, we were on starboard and at the last moment the yacht turned at the last minute and we had to ‘flog’ our kite to avoid a collision. As we did that the spinnaker caught some of the rigging and it was badly torn’”

The top teams in the championship have had a dramatic start to the regatta in the first two races.

Smeg hit a moored boat on the way out to the start and hard to return to shore to make hasty repairs with the race start on 15 minutes away. With a 4-5ft piece of timber, a quick repair was made onshore and the team did remarkably well to come home in third place.

With so much depending on the protest hearings tomorrow, then Tuesday’s two races over windward-and return courses, there could be a dramatic change in the championship points.

The club will have a spectator ferry following each days' racing, leaving Double Bay Public Wharf at 2pm. NOTE: THERE WILL BE TWO SPECTATOR FERRIES NEXT SUNDAY MARCH 10