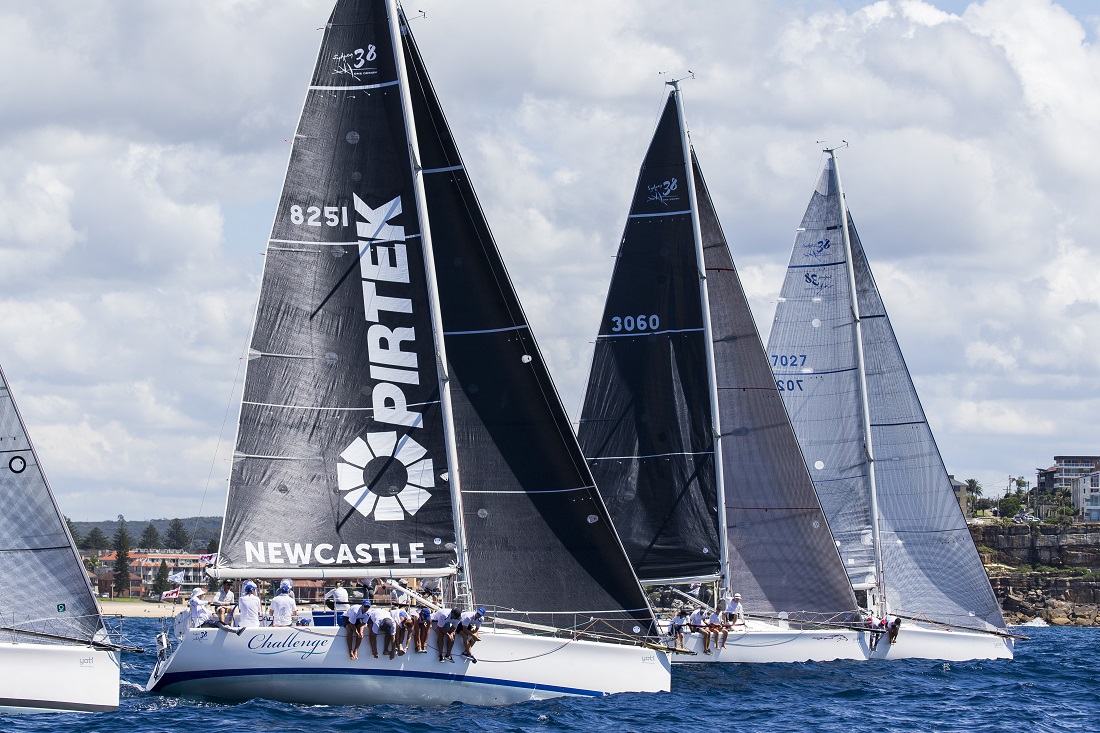 The Quicks (CYCA), who were crowned Farr 40 NSW champions in early February on their ‘Outlaw’, were in top form, winning six from nine races. They did not finish outside the top three on the windward/leeward courses in the Sound on Sydney Harbour over three days.

Father and son had previously owned and raced a Sydney 38 with success, but not for five years, so the crew had little time to get their heads around the class again.

On the opening day, Tom Quick skippered the chartered ‘The Goat’ with some unfamiliar crew, before adding more and more of their usual crew on Days 2 and 3.

The first day belonged to the 2018 NSW champions, Peter Byford and David Hudson (Conspiracy from RPAYC), who came out brimming with confidence, scoring two bullets and a third to Outlaw’s pair of thirds and a win. Conspiracy’s crew was in form and hoping to successfully defend their title, but it was not to be.

By Day 2, the well-named Outlaw had settled in and won all three races to take the Championship lead. Conspiracy fell into a bit of a slump, placing fifth in Races 4 and 5, before lifting to second place in Race 6, for second overall. Calibre’s (Richard Williams/CYCA) consistency across the board had her in third overall.

On Day 3, with Outlaw’s usual mainsail trimmer also back on board to relieve tactician David Chapman of that duty to fully concentrate on calling the shots, there was no stopping them – a second and two wins to claim the title. That Chapman had been able to perform both jobs so well is a credit to him.

Conspiracy, sitting pretty in second, was protested, but it was dismissed, much to her owners’ relief. Calibre finished third, a win in Race 8 cementing their podium place.

Back at MHYC, Quick said: “An excellent result. I had a great team and it was a team effort and very enjoyable. The two final wins we scored, we had to pass Conspiracy on the downwind to get them. They sailed very well,” admitted Quick, who will now have to get into Farr 40 mode again with the Nationals starting on Friday.

“The officials did an excellent job and the class has been well-run too. They went over and above for all of us.”

David Hudson said of the Championship: “It was fantastic sailing, very close, which is the epitome of one-design racing. At the finish, there were literally seconds between the boats.

“Outlaws were superior sailors and deservedly won the Lou Abrahams Sydney 38 perpetual trophy. Tom knew Lou, so it was quite fitting,” he said.

Conspiracy, he said, “had a better day today, making up for some mediocre races yesterday. We had good height and speed on the upwind legs and good mark roundings – no mistakes. We were pleased to pit ourselves against Outlaw and match them. We raced in 12-14 knots and the boats come into their own in those conditions.”

The Corinthian trophy went to Challenge (Greg Croak) . “They sailed consistently and put a lot of effort into getting that trophy,” Hudson remarked. “We are pleased with the newer people on the course. It was wonderful that they were out there.

“Finally, we pay credit to Middle Harbour Yacht Club for hosting the Yoti Sydney 38 Championship and the Sydney Harbour Regatta. Their organisation is top notch and they work hard to make it a success.”

“There is a possibility of larger fleets at future events – the class is alive and thriving,” Hudson noted.

Others who had their moments of glory with top-three results, included Greg Croak’s Challenge from Royal Motor Yacht Club Toronto, Phil Tomkins’ Adrenalin (CYCA) and class newcomer and MHYC member, Peter Sorensen (Advanced Philosophy). Sorro is a former champion skiff and yacht skipper, so is sure to make an impact at future Sydney 38 events.

Racing at the Sydney Harbour Regatta, enjoyed by over 160 boats in 20 classes/divisions would not be possible without the continued assistance of: the Cruising Yacht Club of Australia, Manly Yacht Club, RANSA, Royal Prince Alfred Yacht Club, Royal Sydney Yacht Squadron, Royal Prince Edward Yacht Club, Sydney Amateur Sailing Club and the Sydney Flying Squadron. Thanks go to all.

Full results can be found on the official website: www.shr.mhyc.com.au