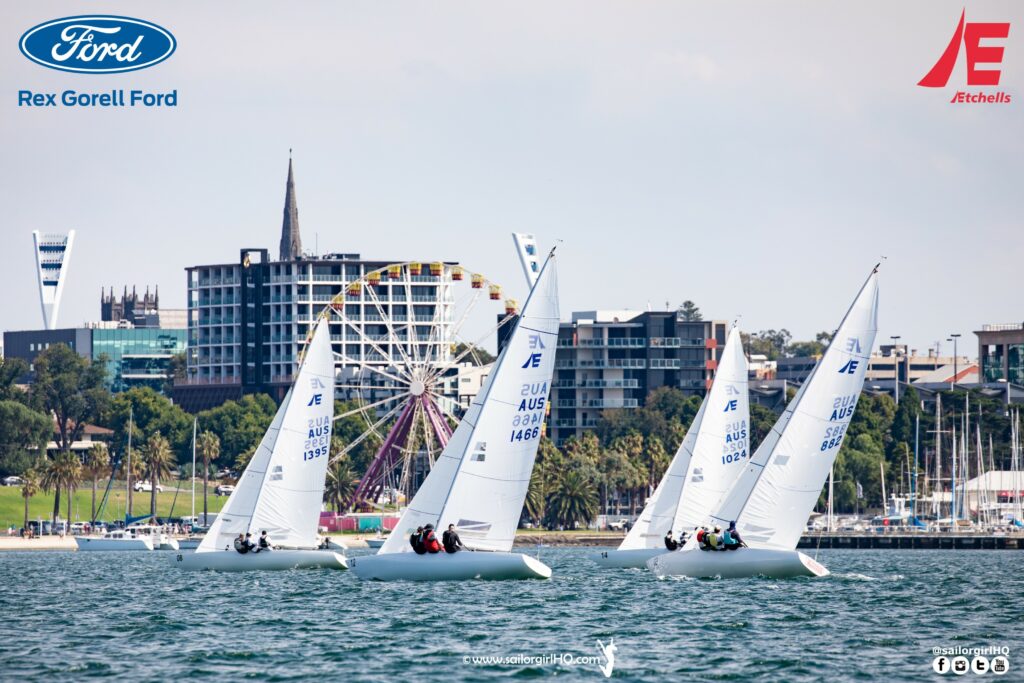 It was tight at the top. Pic - Nic Douglass @sailorgirlhq 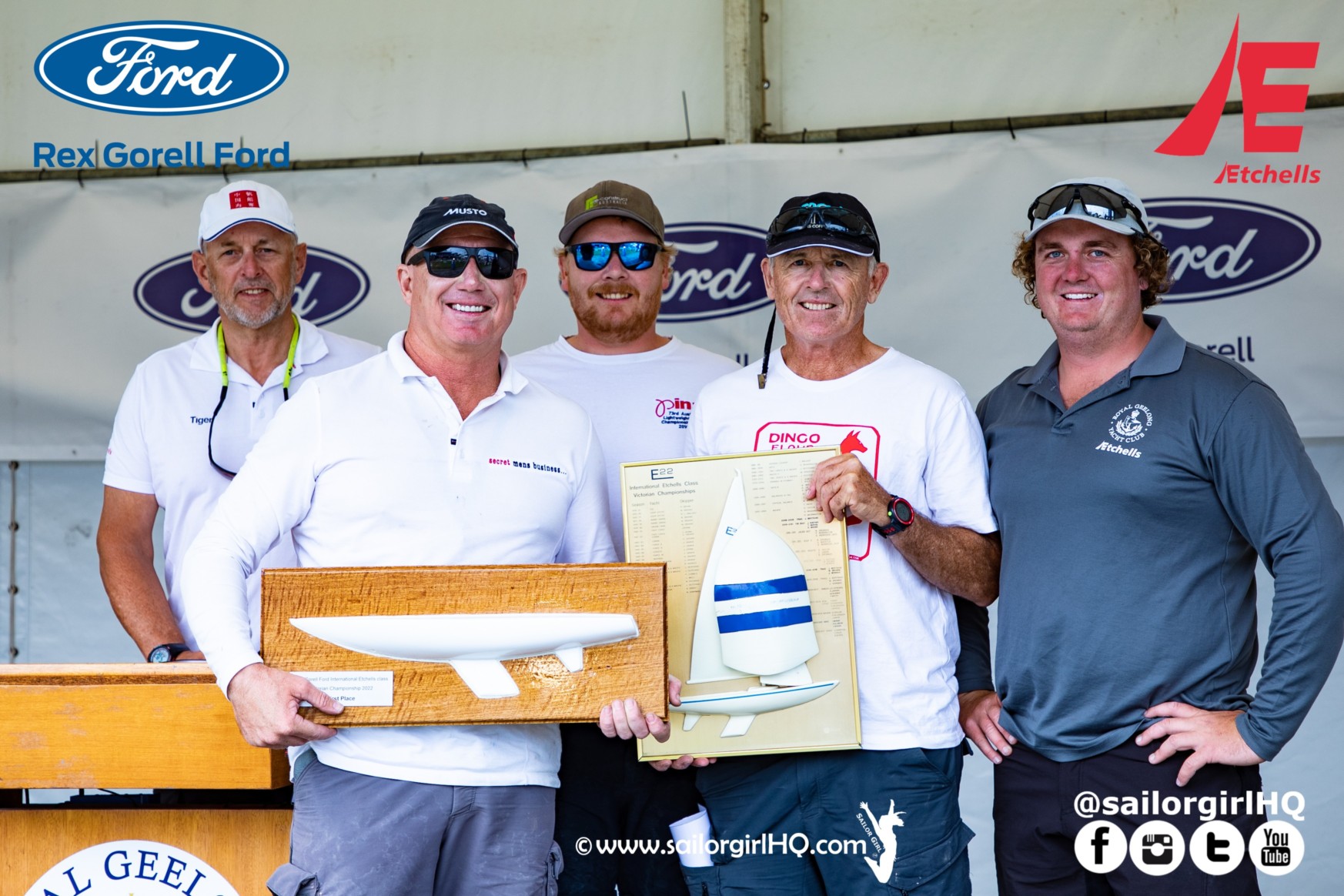 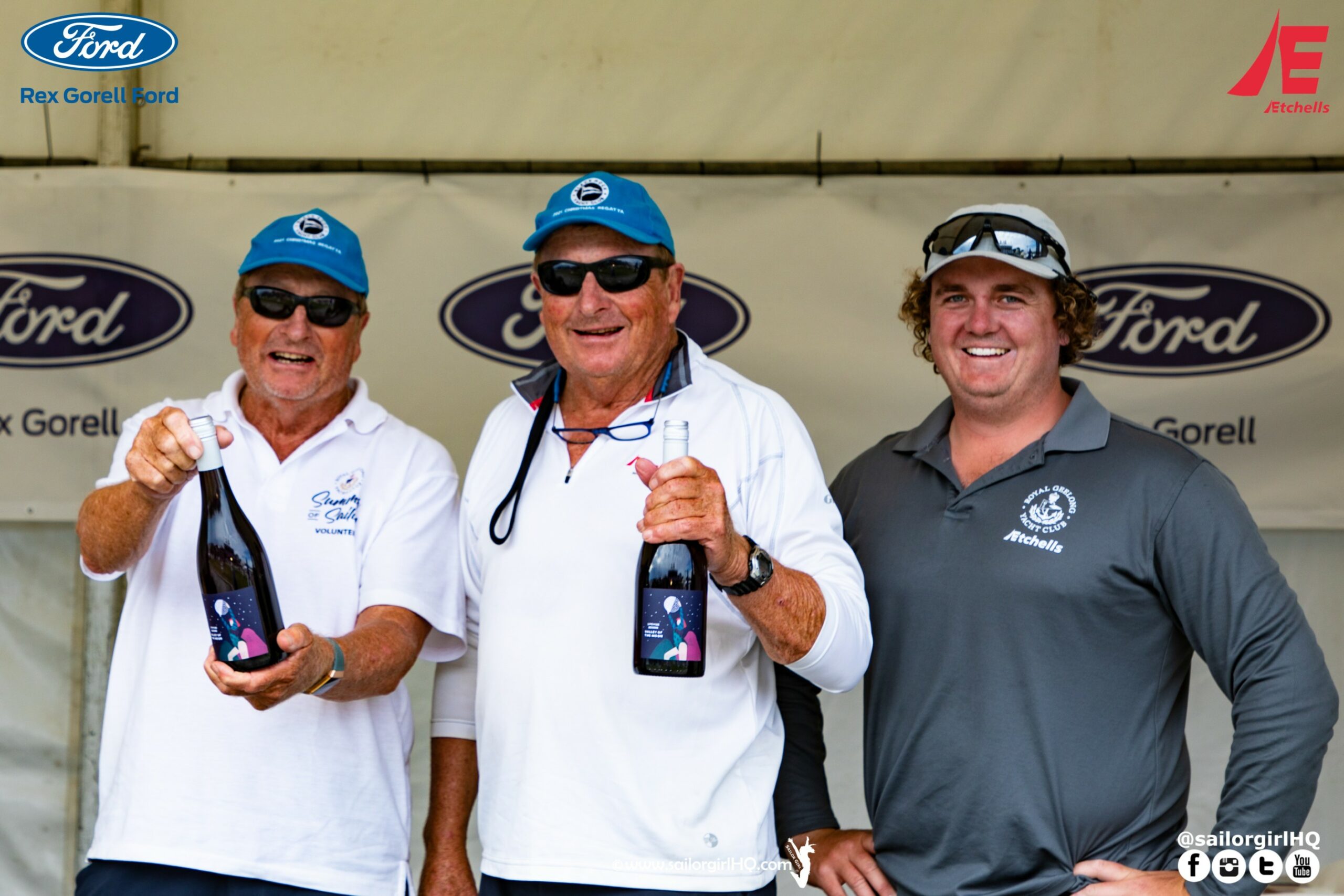 Kevin and Ross Wilson being thanked for their efforts in running the racing. Pic - Nic Douglass @sailorgirlhq 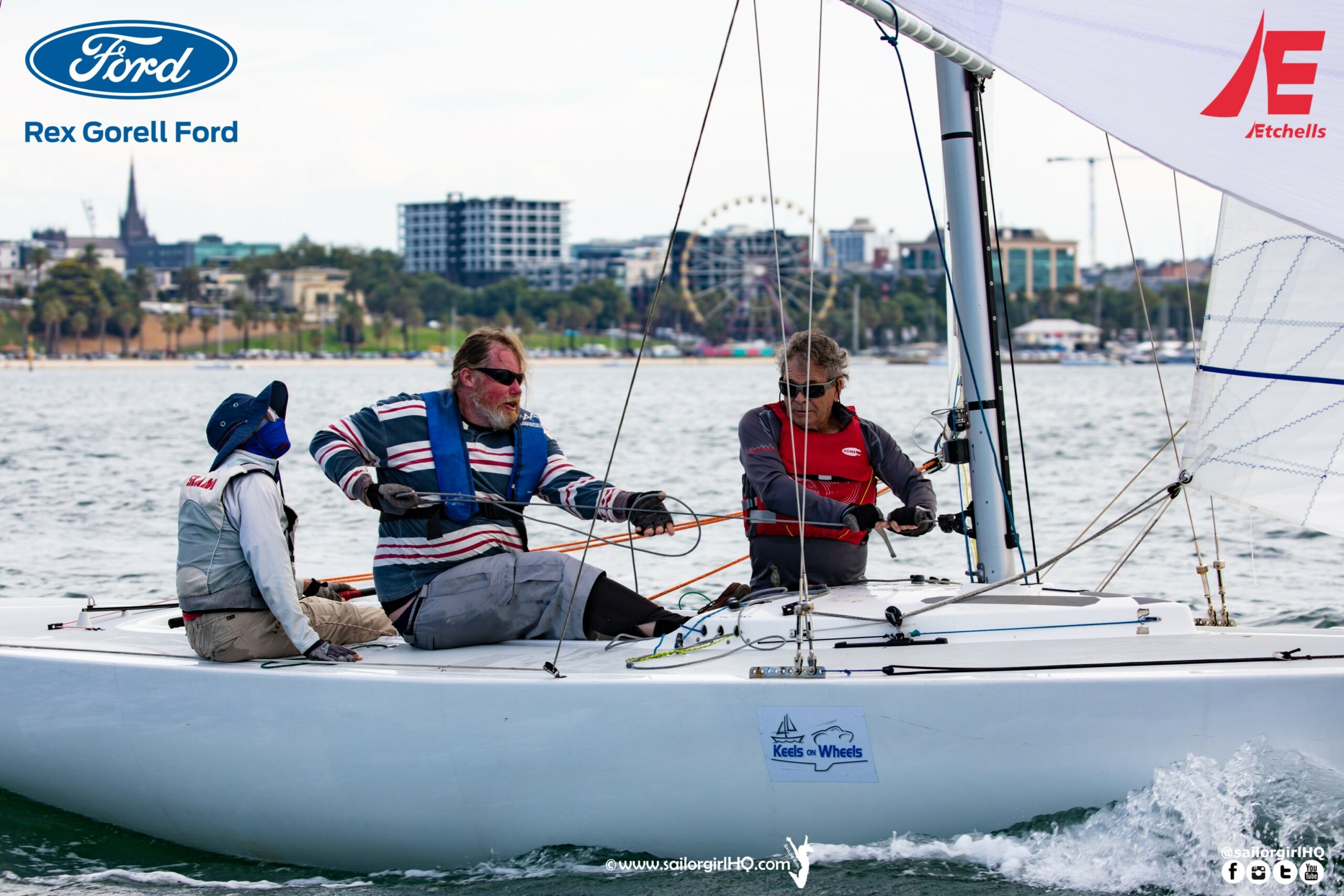 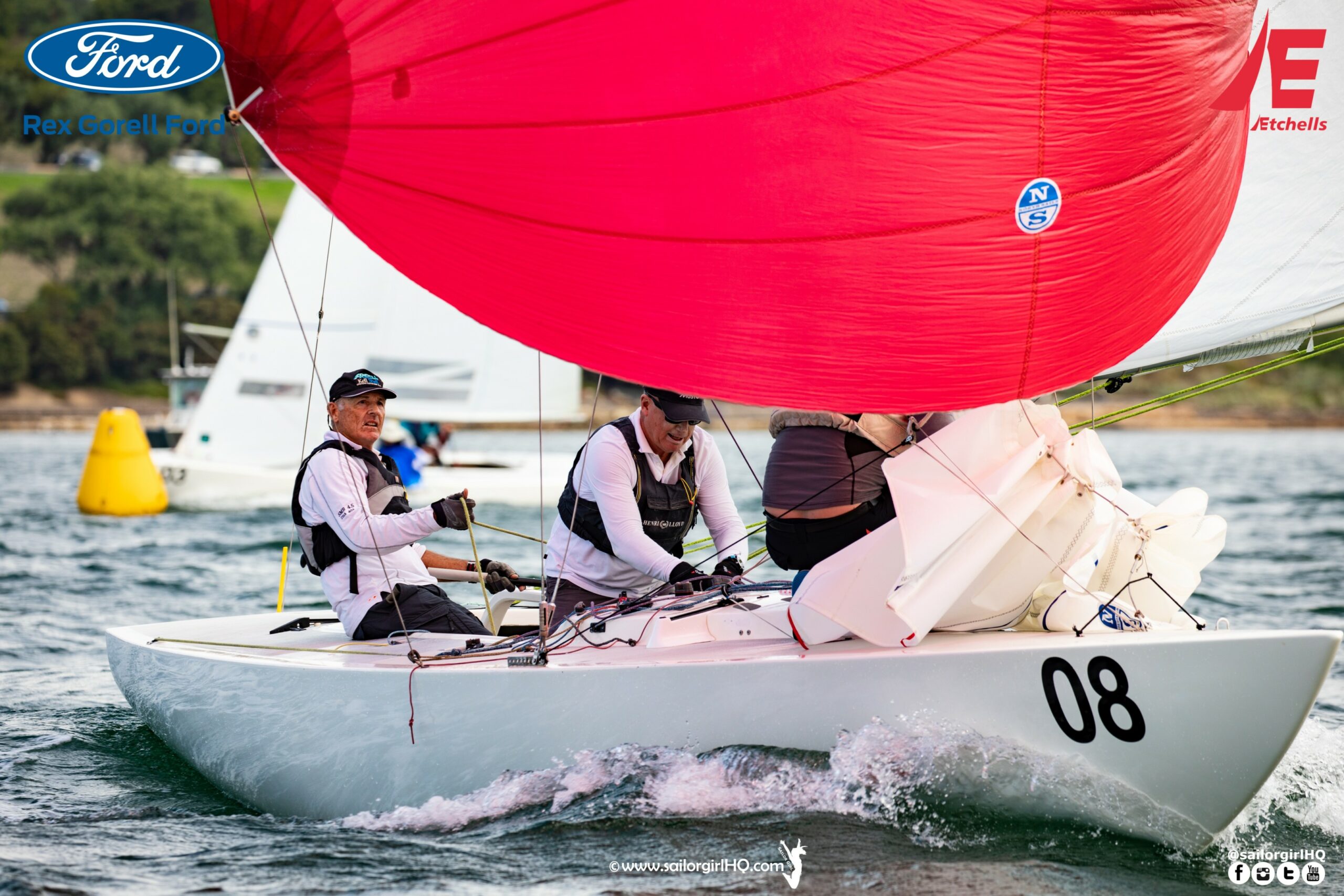 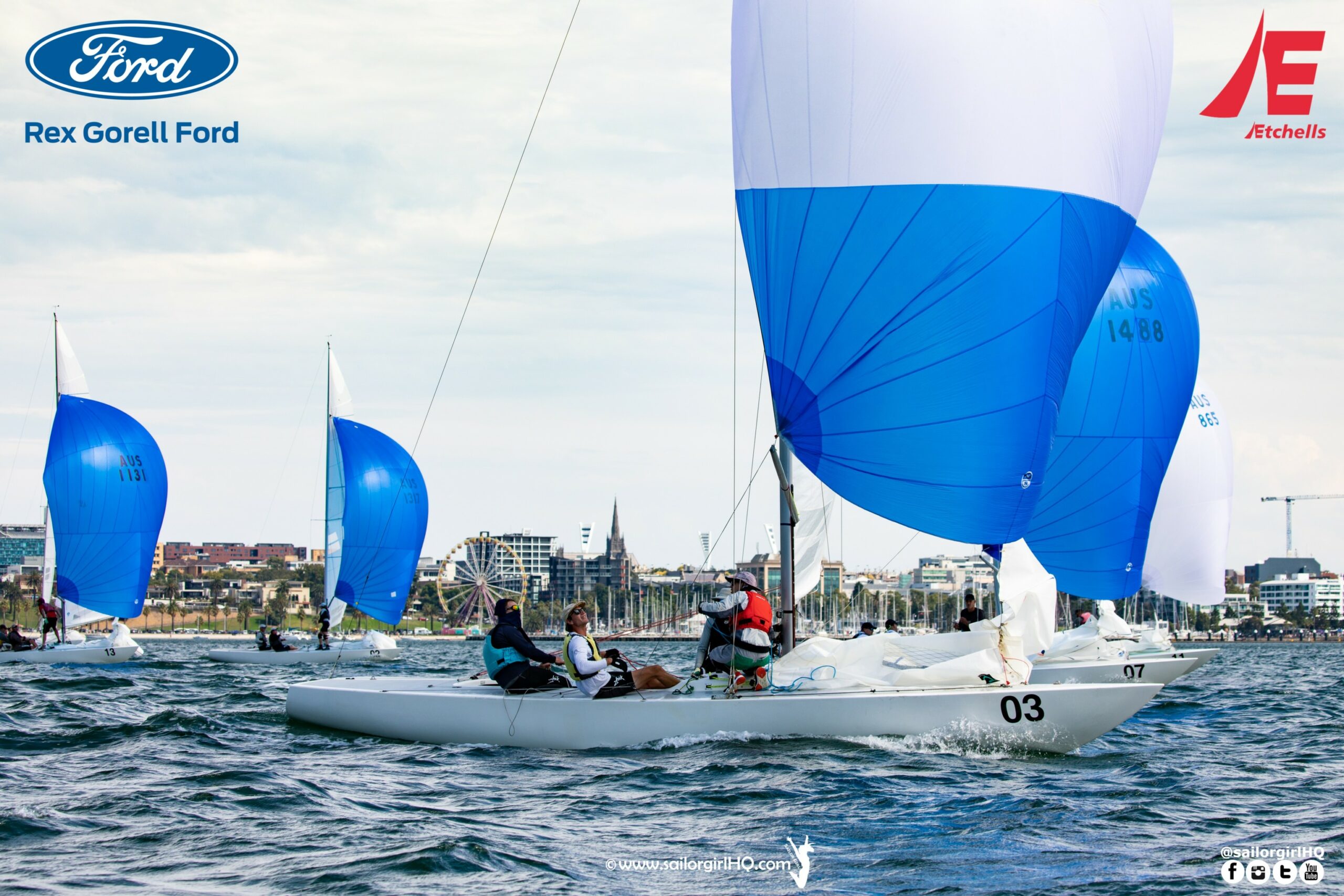 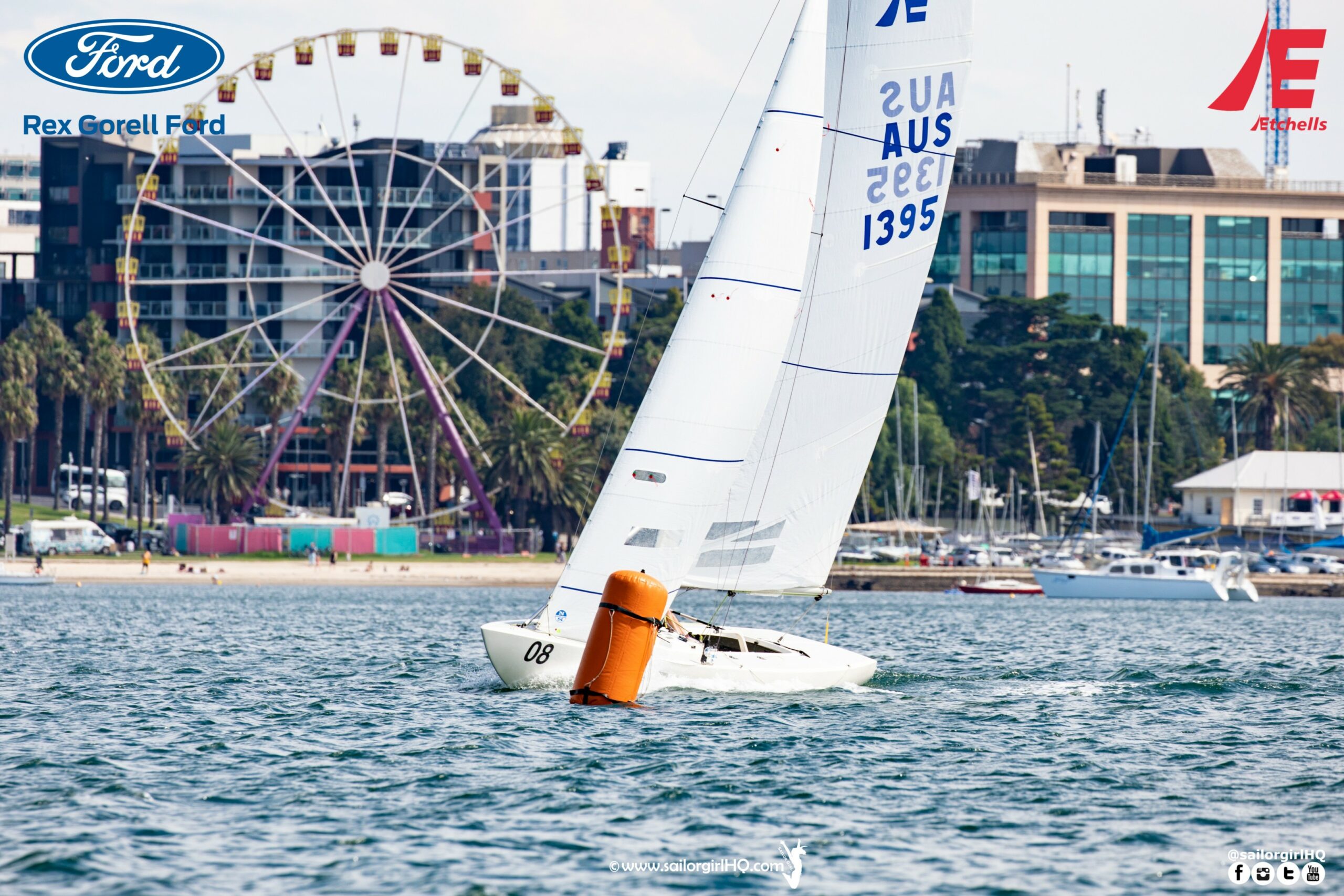 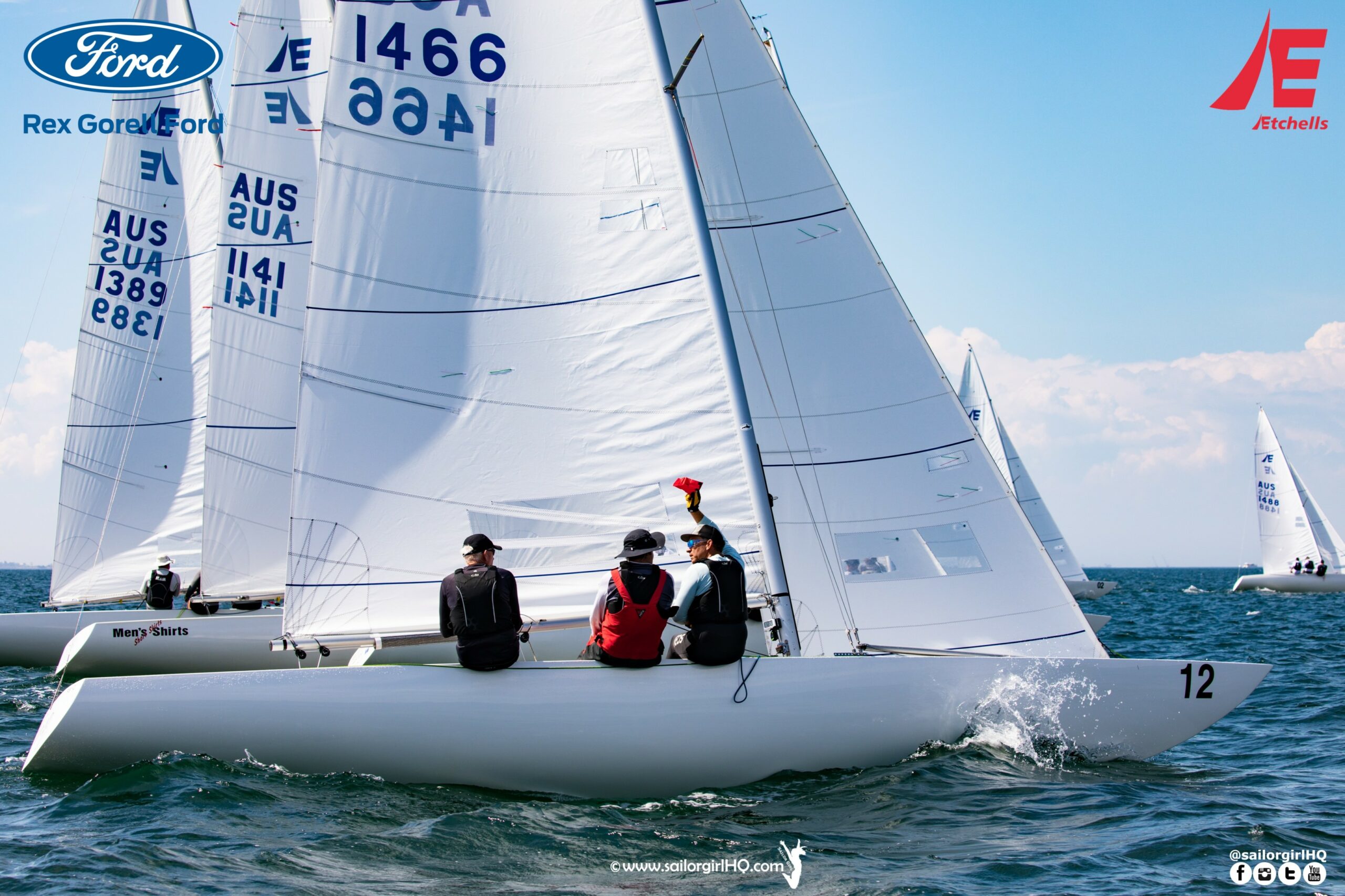 Haines on board Tango flags an incident at the start of Race 4. Pic - Nic Douglass @sailorgirlhq 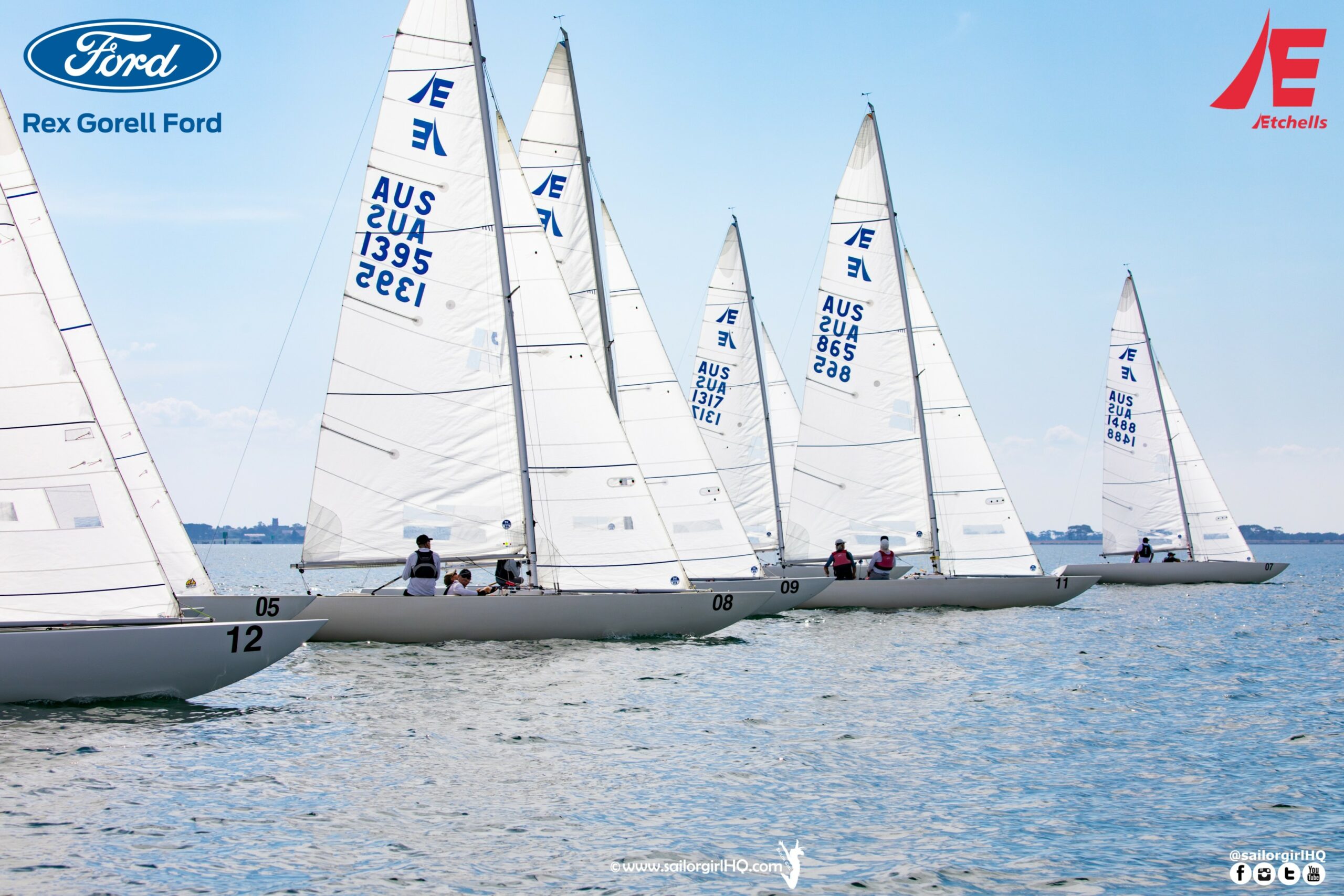 Off and racing after a delay waiting for wind. Pic - Nic Douglass @sailorgirlhq 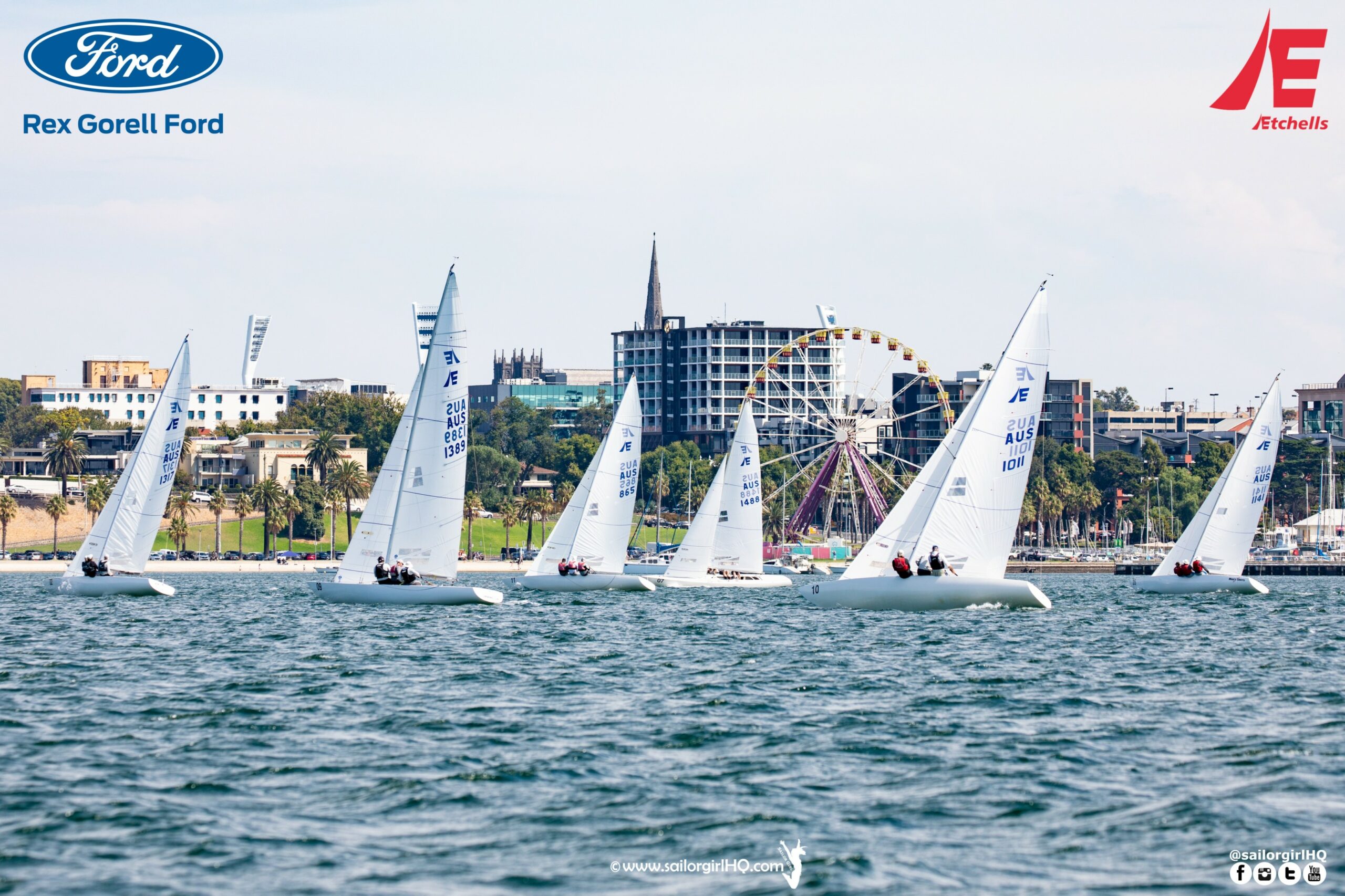 The Rex Gorell Ford Victorian Etchells Championship concluded with two final races yesterday, the last of the series raced in a beautiful sea breeze just off the outer wall of the Royal Geelong Yacht Club.

Shoulda Gone Left AUS1395 skippered by Robin Deussen, with David Snoad and Jesse Mitton from the Cruising Yacht Club of South Australia who are new to the Etchells class were the standouts. The new team won the final race to take the Championship convincingly from current national champions, Tango AUS1466, Chris Hampton and Sam Haines with fill-in crew, Barney Walker.

“I’d like to thank Rex Gorell Ford,” said Robin Deussen, skipper of Shoulda Gone Left AUS1395 when receiving his trophies with his team.

“I’d also like to thank James [Hannah, Geelong Fleet Captain] and everyone else from the [Royal] Geelong Yacht Club and the Etchells Association that have worked obviously tirelessly on this regatta, well it will be special for us obviously because we won too,” he continued.

Additionally, Deussen paid tribute to the class and all of the advice that was freely given to him and his team, given they are new to the Etchells class.

“I would like to also thank anyone who gave us any information that they could. Everyone knows who that is. We got into this class not really knowing anything, and everyone is really not backward in coming forward, and everyone makes sure that if we ask a question they tell us, so thanks again.”

Deussen also paid tribute to his team, and to the Race Officer, Kevin Wilson and his Race Management team which included Ross Wilson, who did a fantastic job in getting a series in, under incredibly trying conditions.

On the final day, the Race Management team first postponed the fleet onshore and then on water while waiting for raceable conditions. Race 3 eventually got away with a bearing of 140 degrees, on a two-lap course at 0.9 nautical miles in a breeze strength of 5-7 knots.

As the gun went, Tango AUS1466 was over in the light air, and it was a long way to return to the line. On returning, they opted to go right on a long port tack to clear their air which proved to be a valuable option for coming back.

Meanwhile, Brendon Jukes’ Jukes of Hazzard AUS882 with Michael O’Brien and Nigel Jones 882 had again gotten the best start after a ripper in Race 1.

At the first gate, Tango AUS1466 rounded second behind Smoking Gun AUS1389, followed by Men’s Shirts Short Skirts AUS1141, and Panther AUS1488 who made big gains moving from ninth through to fifth on the first run. Jukes of Hazzard AUS882 meanwhile got the worst of the right-hand shift that came through while the fleet was heading downwind and rounded the bottom in ninth.

Nick Gunner, Anthony McRae and Simon Gunner on Smoking Gun AUS1389 led around the top and fittingly took the bullet, second was Grand Master, Ian Crisp on Stella AUS1101, Tango AUS1466 bore away in a massive left hand shift as they rounded the top and continued to finish in third, scoring their worst score in sixth was Shoulda Gone Left AUS1395 dropping from fourth at the final top mark.

After the third race, Tango AUS1466 were just one point ahead on eight points, with Shoulda Gone Left AUS1395 on nine points, with a much larger potential drop, which would come into play with a fourth race in the series.

The sea breeze filled in properly for Race 4, and with a quick reset the fleet were away on another two lap course at 0.9 nautical miles with a downwind finish, course axis 150 degrees, in 10-16 knots of building sea breeze.

Jukes of Hazzard AUS882 again nailed the start at the pin end, making it three best starts from four for the regatta, while The Moe AUS1131 and Tango AUS1466 were having a bit of a disagreement about who owned the boat end. Sam Haines on the bow of AUS1466 flagged the incident, and we heard no more of the issue.

At the top, Shoulda Gone Left AUS1395 were exactly where they needed to be in first position. Robin Deussen, David Snoad and Jesse Mitton from the Cruising Yacht Club of South Australia were never headed, and by finish had extended their lead. The red spinnaker of Shoulda Gone Left AUS1395 crossed the line well in front to take the final race gun, and the Championship.

The next Etchells Australia events will be raced at the Southport Yacht Club and the Mooloolaba Yacht Club.

For the full calendar, see:https://www.etchells.org.au/calendar/default.asp