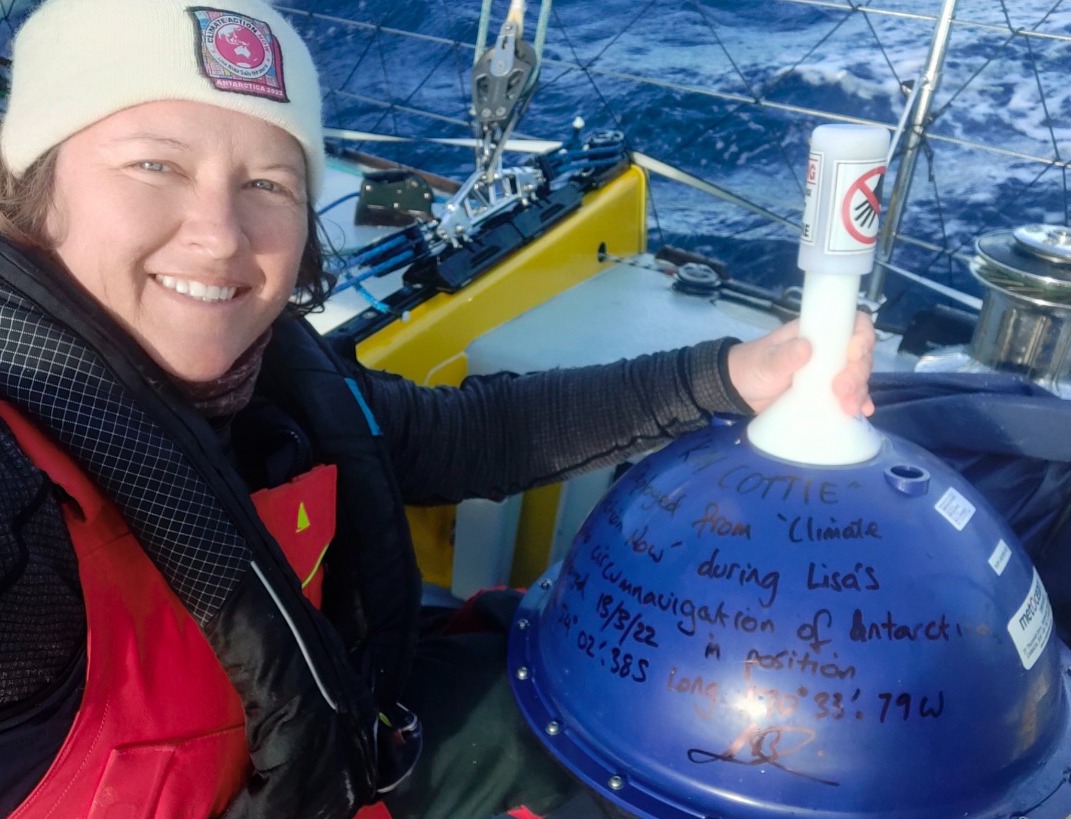 In her latest blog post, Blair enjoys the sunshine, deploys a drifter buoy named ‘Kay Cottee’ and has a cape rounding ceremony.

Well today I woke up with a little unexpected surprise – sunshine. It’s the little things in life out here that bring me joy, and nothing does it quite as well as a lovely blue sky and sunshine.  I yet again didn’t manage much sleep last night as the winds dropped out to below 20 knots from 2am onwards and I needed to go on deck and increase my sail area.

I wasn’t trusting that the light winds would last so I only shook out to the second reef and put the no two jib out. The winds were clearly light enough to go to the full sail but I really wanted to err on the side of caution.  But this left me in some large rolling seas and going only seven knots, so it was rather uncomfortable when I tried to get some sleep.

I eventually gave up on sleep at around 9am local time and dragged myself out of bed.  I wanted to put the lighter winds to good use as I know that I am in for some bad conditions for the next few days. As Bob (met bob) tells it – brace for hailstorms and gusts up to 45 knots plus 5 metre-plus seas.

So, after another delicious breakfast of porridge, I was starting to set a plan for the day.  I spent a lot of time on deck just watching the conditions and while I could easily have put more sail up, I decided against it as I would be deploying one of the Bureau of Meteorology weather drifter buoys today. These weigh up to 37kg and can be quite difficult to manoeuvre out of the hatch so by having the boat a little slower it was going to help me in safely deploying this drifter buoy.

I had also planned to have my cape rounding ceremony at long last as it was well overdue and what better time to do try to garner favour with Neptune than before all that bad weather hits.

I firstly dug out the weather drifter buoy. I originally started out with eight of these and I will be deploying the second one today. I always tend to write the boats name and position of deployment on the buoy before deployment, but this time I decided to go one further. I wanted to give them a name so I can talk about X drifting buoy and I came up with an idea that I rather like.

I have decided that I am going to name each weather drifting buoy after a famous sailor who has one way or another, inspired my journey through sailing.  And for the first one I am naming it ‘Kay Cottee’.  I first read Kay’s story in 2010 after I had been sailing for around a year. I remember reading her story and thinking to myself that that’s the type of adventure I want in my life. I clearly remember thinking that maybe one day I would gather enough sailing experience to sail solo, but it seemed like this huge and daunting task at the time.

But as I read more of her story, I started to believe that anything is possible and that the skills I was lacking to safely become a solo sailor were just things I needed to learn, and I started dreaming.  Never in my wildest dreams did I think a I would be solo sailing a few years later. It felt like something I might be able to do after 20 years of sailing or more.

So, as I deployed the Bureau of Meteorology weather drifting buoy today, I remembered that moment when Kay Cottee inspired me to look at solo sailing and reflected on how much I have achieved in the short space of 12 years of sailing. So, thank you Kay.

While I was on deck, I also wanted to have the cape rounding ceremony. Calling it a ceremony is probably a bit of a stretch, but it is a way for me to thank the ocean for allowing me safe passage on her waters. While in this ceremony I am speaking to King Neptune, he is simply my representation of the ocean and its moods.  Much like the weather gods that I beg favours or curse from time to time.

The ceremony is fairly simply in that I raise a toast to Neptune as a thank you for granting me and my vessel Climate Action Now safe passage from Albany to the Great South East Cape and then onwards past the Great South West Cape. I take a sip of the champagne, I then ask for Neptune to allow me safe passage to continue my journey and offer him this drink in exchange, I then poor the rest of the bottle into the sea for him.

The rest of the day was filled with small tasks and before I knew it the sunshine was fading and the day was over. The winds are now just starting to build to 30 knots in the gusts, so I just ducked up on deck and furled the no two jib away in preparation for it to continue to get worse.  The weather is due to hit in two hours so I will be putting the third reef back in the mainsail last thing before I go to bed so I am as set as possible for those hail storms.

I would like to take a moment to thank today’s wonderful degree sponsor.

170 West – d’Albora Marina Victoria Harbour, Docklands VIC –  Thank you d’Albora Marinas for your ongoing support and what a great marina in a beautiful location right in the heart of the city

Well that’s it from me, it’s all just a waiting game now for those winds to arrive so goodnight all.