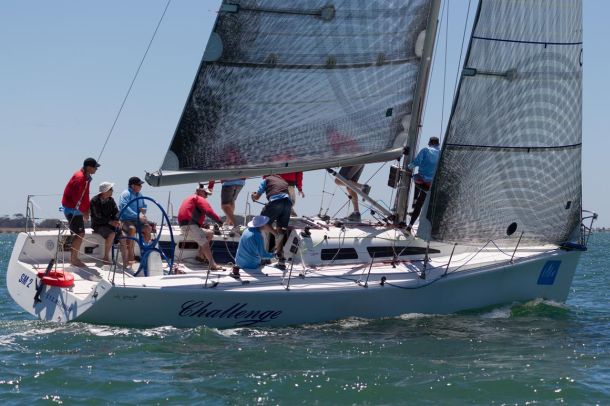 In 2014 the Sydney 38 Australian championship trophy was held high above the Victorian Challenge team, one of the final career highlights for the class doyen, the late Lou Abrahams. This year NSW holds the entry majority at the looming Sydney 38 national title to be run under the Performance Boating Sydney Yachts regatta banner.

Victoria boasts a highly organised and competitive Sydney 38 fleet with the highest participation rates in the country, but they will need to bring their A game to the three-day series the Royal Prince Alfred Yacht Club is preparing to host this weekend, February 20-22, 2015.

Most of the five Mexican teams making the 530nm delivery from Melbourne across the border to the inshore waterway of Pittwater, north of Sydney, are now installed at the RPAYC and the banter has started. One Facebook post jokingly calls for cavity searches by authorities on the boat people arriving illegally from Mexico uninvited to steal the silverware!

For the first time a single dedicated series is bringing together two classes of Sydney Yachts – Sydney 38s and Sydney 36s – on the same race course. Numbers are close to final and add up to a significant turn out; 15 Sydney 38s starting their series on Friday February 20 and five Sydney 36s joining the action on Saturday.

One design racing imposes varying class crew weight limits, a rule that demands a unique category of personal preparation on top of the usual rigours of fitness and crew work. An 800kg weight limit on a Sydney 38 means 10 crew have to average 80kgs each and class President Greg Clinnick says, “there has been lots of fasting going on to make weight.”

At the preliminary weigh-in for the Sydney 38 Audacious, which Clinnick co-owns with Paul Holden, the crew discovered they were 25kgs too heavy. “The only problem was that most of the weight had to be lost by only three crew members, as the rest are pretty lean and mean. Everyone has committed to be at their assigned target weight, and failure is not an option,” the Pres assures.

“Losing 10% of your body weight is easy, right? Please warn the kitchen that there will be a large food order straight after weigh in,” he suggests to RPAYC staff.

Late last month world-beating Paralympic sailor Daniel Fitzgibbon scored yet another SKUD 18 victory, this time at the ISAF World Cup Miami. He’s since resumed training on Pittwater and working towards satisfying entry requirements with his modified Sydney 38 called Another Challenge.

The Sydney 38 Class Association is delighted with the size and calibre of the starting list for the championship series to be run by PRO Steve Merrington and his team under the likely influence of puffy nor’easterly sea breezes.

Both former and current active owners recognise the important feeder role the Sydney 38 class plays in the sailing community. “It’s the main stepping stone up to the grand prix fleets for many owners and young sailors,” says Bruce Ferguson, skipper of Whisper and Sydney 38 association and regatta organising committee member. “Well-known successful yachties such as Guido Belgiorno-Nettis and Marcus Blackmore went on from a Sydney 38 to campaign classes such as the Farr 40s, TP52s and MC38s.”

From this coming Friday to Sunday up to four windward/leeward races are scheduled to start daily at 1100hrs either to the north of Scotland Island or in the Broken Bay offshore zone.  The final presentation of awards will take place immediately after racing on Sunday at the host club.