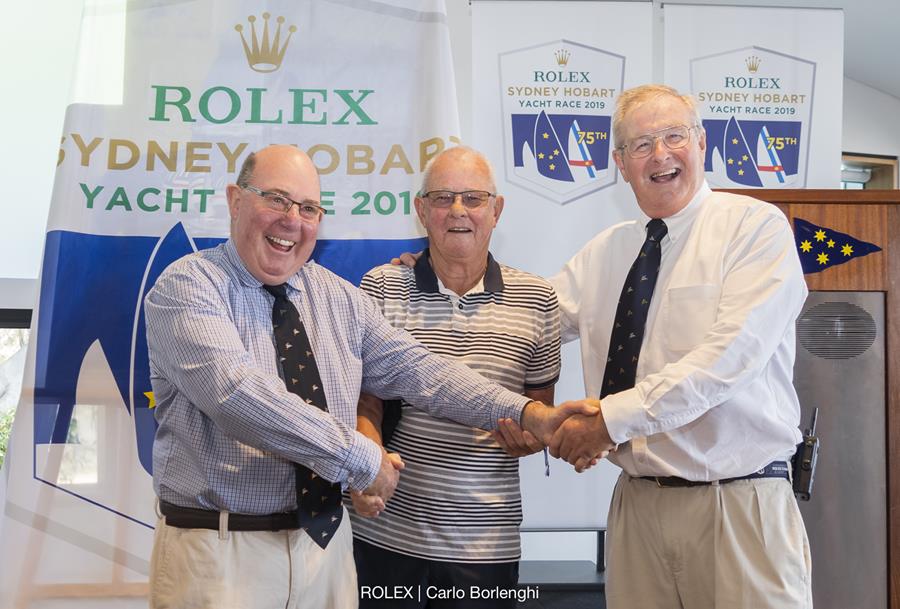 They have one of the most important jobs of the Rolex Sydney Hobart Yacht Race – without them, the 628-nautical-mile race would not even get under way.

It takes a trio of official starters to formally carry out the three-stage responsibility that sends the fleet on its way up Sydney Harbour, through the Heads and south for the rest of the Cruising Yacht Club of Australia's race to Hobart.

For this year’s 75th edition of the race, the trio was made up of David Kellett AM, who fired the start cannon, Tony Cable, firing the five-minute warning, and Jim Burke.

Burke, a crew member on Sir Max Aitken’s Crusade from the UK, which took line honours in the Sydney Hobart 50 years ago, fired the 10-minute warning. From a record 79 entries in 1969, Crusade took line honours from Apollo in the time of three days 15hours 07mins 40secs.

“I’m extremely honoured and have been following and participating in the race since I was a small boy. I used to go to Clifton Gardens as a 10-year-old to watch the start of the race,” Kellett said. “I joined the CYCA in 1970 and have been passionate about it and the Sydney Hobart Yacht Race since. Never in a dream did I think I’d have the honour of starting the race.”

Like Kellett, Cable also has two line honours and an overall win on the same boats with Kellett, and is also a Life Member of the CYCA. In 2016, he became the first person to reach a record 50 Sydney Hobart races as a competitor. He recorded another passage last year on the Radio Relay Vessel, where he will be joining Kellett again this year.

“I recognise that it’s a great honour to be selected to fire the five-minute cannon, particularly following on from the many distinguished gunners that have started before,” said Cable. “It will also be special, as well as my wife Ada, and son Ross, will be in attendance.”

After starting the 75th race, Kellett and Cable left the start boat, Eclipse, and were transferred to the Radio Relay Vessel, JBW, in a fitting tribute for them and the race.

For full list of entries and all information: http://rolexsydneyhobart.com/