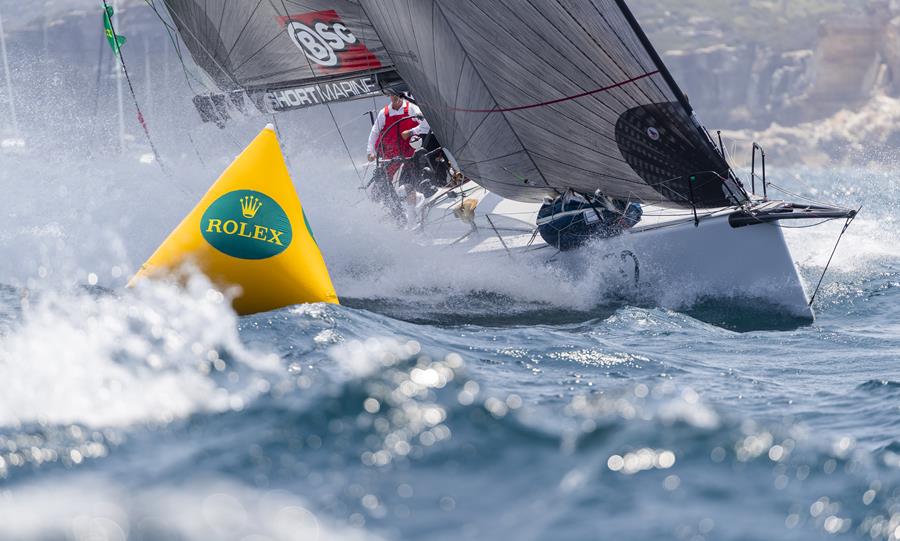 The start of the 2019 Rolex Sydney Hobart Yacht Race had plenty of challenges for big and small. Credit ROLEX/Studio Borlenghi.

The five supermaxis at the head of the Rolex Sydney Hobart fleet were “parked” off the southern NSW coast at 5am this morning (December 27).

Jim Cooney’s Comanche still leads the race for line honours but she is just 1.5nm ahead of Scallywag. They were followed by Black Jack, InfoTrack and Wild Oats XI, whose recent “surgery” to repair damage suffered during the Cabbage Tree Island Race appears to have done nothing to enhance her performance.

The supermaxis are in an area of very light air and were progressing towards Hobart at only 4 to 8 knots of boat speed.

With good pressure building from the north, the rest of the fleet has closed on the leaders over night.

At 5am, it was a small boat race for handicap honours, with the first five boats in the current standings all being from Division 7. Bill Berry-Cotter’s Katwinchar was leading from Windrose and the old favourite, Love and War.

Before the race, pundits suggested that ultimately the winner could come from the TP52s again. In that group, Craig Neil and Bob Steel’s Quest had bragging rights as the sun came up.

With north-easterlies of more than 25 knots coming down the coast from Sydney, the entire fleet will be moving again by mid-morning. That will definitely shake up the handicap situation and could also change the line honours picture, as Comanche’s light airs advantage will evaporate.

It is going to be a fascinating day of Sydney Hobart watching!

From the RSH Media Team:

Last evening, Will Oxley reported from Ichi Ban, “All well on board. We are having close racing with Envy Scooters; the previous Ichi Ban. We’re expecting things to lighten considerably, around 1900 tonight, but for now we are ripping.”

Aboard Tim Gadsby’s Filepro from Bellerive Yacht Club in Tasmania, the crew were enjoying the earlier part of their race: “Sunny afternoon out here, having a sneaky send in 25-30 knots of breeze,” Gadsby said from aboard the 1993 Sydney Hobart winner, the formerly named Cuckoos Nest.

“Downstairs is like a sauna, and every now and then we turn into a submarine. The navigation team is downstairs plotting our next tactical move.”

Two yachts have retired from the race; both late yesterday afternoon. Ray Roberts’ Hollywood Boulevard (NSW) broke her rudder, while the Inglis 38, Faster Forward (Matt Fahey, Vic), sustained steering damage. All aboard both boats are fine.

Down in Hobart, the locals and those from the race’s finishing partner, the Royal Yacht Club of Tasmania (RYCT), eagerly await the arrival of the fleet.

“Every year, every Sydney Hobart is a celebration, but this year even more so, being the 75th running. We look forward to welcoming each and every yacht, day or night. We wish every yacht safe and successful sailing, and see you in Hobart for the celebrations,” Tracy Matthews, the RYCT Commodore said