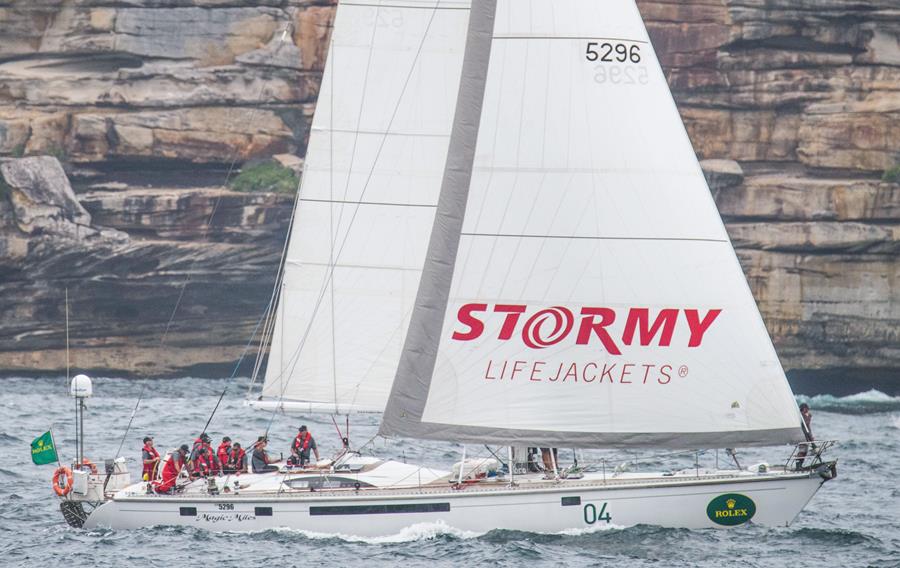 The sight of award-winning Australian actor Kerry Armstrong on the 62-footer Magic Miles in this year’s Rolex Sydney Hobart should leave observers thinking they are seeing double.

Why? Because double is what they will see. Armstrong will be joined as crew on Magic Miles with her stunt double Rese Emanuel. They will be two of eight Rolex Sydney Hobart rookies on the 14 crew, another including owner/skipper Michael Crew’s 78-year-old father Paul.

Before the 75th Sydney Hobart, Armstrong said at the Cruising Yacht Club of Australia: “I have three beautiful boys at home. I am doing it for them and all the mums around the world.

“I am very excited to be doing my first Sydney Hobart and looking forward to it.”

Crew, a Qantas pilot, said Armstrong wanted her participation to be a low key one.

But her start was destined to emerge once her spot on Magic Miles was confirmed after she sailed on it for her delivery run to Hamilton Island, and raced at Hamilton Island Race Week.

“It was supposed to have been kept under wraps for as long as possible,” Crew said. “She is super excited.  She and Reece, her stunt double, are looking forward to the adventure.”

“Having sailed with Kerry who is now a great friend, she is an absolutely positive personality.”

Crew is excited about what his green horns can bring, as he discovered in the 2014 race. “We had a couple of mishaps. One of the guys who had never been on a boat said: “What about this … we all stopped, looked at him and said, ‘Yeah, that’s going to work,’” he said.

“It doesn’t always require someone with experience; just a different perspective or outlook.”

Crew, whose 62-footer is one of 15 Tasmanian starters, knows first-hand the value of different perspectives. He says his experience flying has helped him sailing, and visa versa.

“Aviation is quite similar to sailing,” Crew said. “You have got people who love what they do. “It’s a really professional outfit of guys and girls who help each other and get the job done.

“There are similar scenarios, working with the weather. If you fight the weather you are never going to win. The two environments are very similar.”

There is still plenty of experience on Magic Miles that last sailed the Rolex Sydney Hobart in 2017 when she finished 15th PHS and fifth on Division 2.

The most experienced crew member is Steve Grellis, with 27 races to his name. While one of the more interesting is retired CSIRO research scientist Barry Bruce, his boat manager.

The crew is realistic about Magic Miles’ potential in the Rolex Sydney Hobart. “We want to improve on our previous positions. Each year we have been a little bit faster,” Crew said.

“We are a big heavy slow cruising boat. We are 34 tonnes of displacement. We have to push 34 tonnes of water out of the way every foot we race.

“We need big winds. We are hoping for strong southerlies. The boat performs well in those,” the Tasmanian said.

“The object is to finish, to get everyone home safely.”