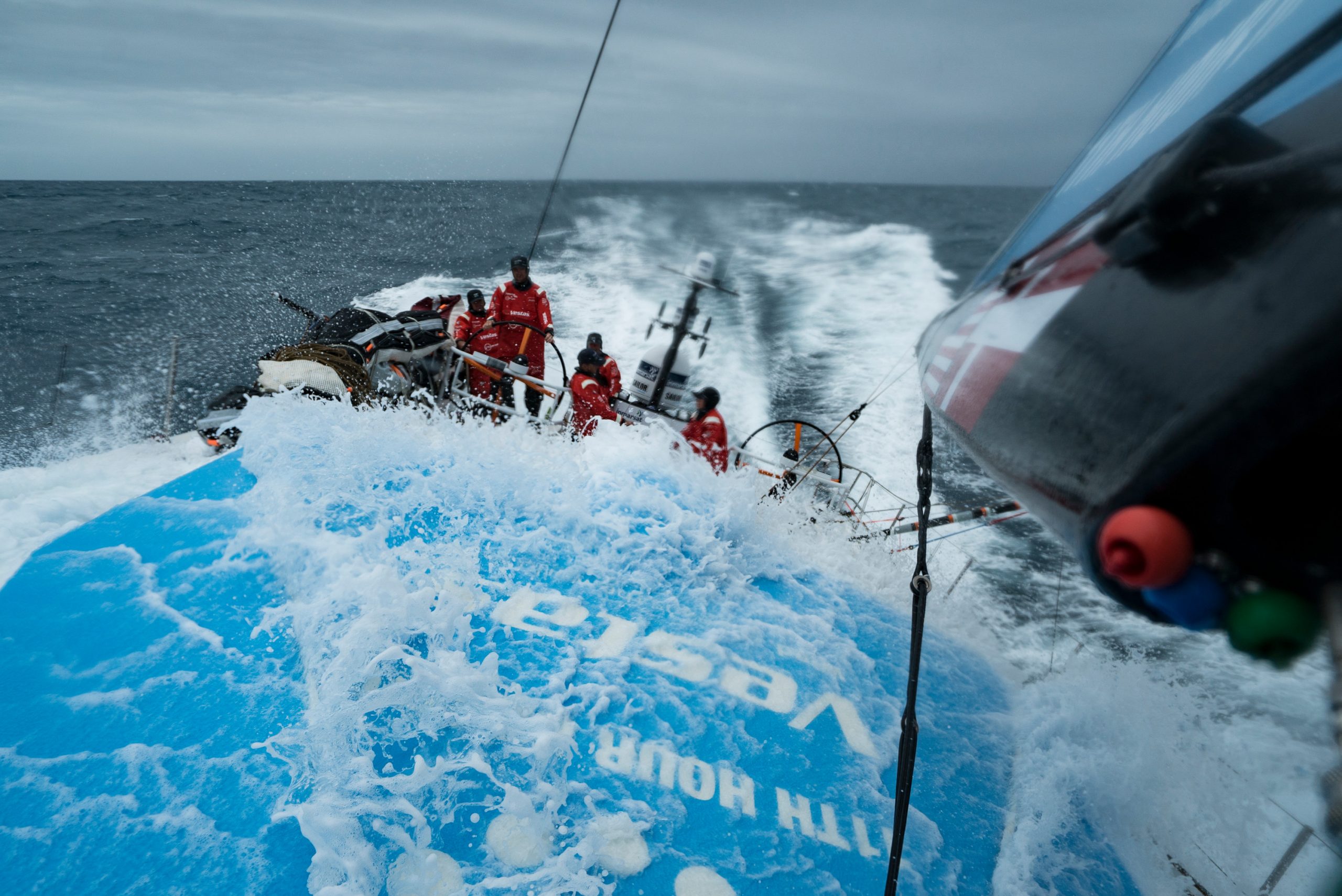 Coming up to speed on Vestas---Will-Suto/VOR-pic

With exactly 100 days to go before the Volvo Ocean Race fleet departs Alicante to tackle 45,000 nautical miles around the world, Vestas 11th Hour Racing have unveiled their crew for the 2017-18 edition – and have built a mixed, ten-strong team featuring six nationalities and six previous Race wins.

The line-up features a wealth of experience, including Simon Fisher (GBR), who returns for his fifth Volvo Ocean Race appearance after lifting the trophy as the winning navigator with Abu Dhabi Ocean Racing last time out.

He is joined by two-time winner Phil Harmer (AUS), who is hunting a Volvo Ocean Race hat-trick following successive victories in the last two editions, five-time sailor Damian Foxall (IRL), who scored a win in 2008-09 on board Ericsson 4, and Race veteran Tony Mutter (NZL), who returns for a sixth lap of the planet, having gotten his hands on the trophy twice in the past.

“It’s amazing to be back in the Volvo Ocean Race with some old acquaintances as well as inspiring new talent,” revealed Fisher. “This time we’re focusing on performance, as well as a sponsorship with an important message, backed by two partners, Vestas and 11th Hour Racing, fully committed to making a positive change.

“It’s a privilege to be given the chance and the platform to share the message of sustainability and ocean health. I’ve dodged everything from telegraph poles to old fridge-freezers while at sea. We’ve got to act now, and as a group, this is what we aspire this campaign to be about.”

Tom Johnson (AUS), fresh from the America’s Cup as part of Team ORACLE USA, steps back onto a Volvo Ocean 65 after racing last edition on board Team Vestas Wind – and Nick Dana (USA), who competed alongside Enright and Towill, returns to the Race for a second consecutive outing as a sailor.

For others, this will be their first round-the-world race. Denmark’s Olympic medallist Jena Mai Hansen joins Britain’s Hannah Diamond as one of two female sailors on board following successful trials during recent transatlantic trips from Lisbon, Portugal to Newport, USA.

“It was actually my first-ever full night at sea – an intimidating but amazing experience,” explained Hansen. “Helming a Volvo Ocean 65 boat in the middle of the Atlantic in pitch dark, in 40 knots, is without a doubt one of the craziest things I’ve ever done. I’m hungry for more and excited to be part of a skilled, international team. Bring it on.”

Between them, the crew have competed in the Volvo Ocean Race over 20 times – and skipper Charlie Enright says that he’s delighted with the preparations with just a few months remaining until the start line.

“We’ve taken our time to get this right, and we couldn’t ask for a better group of sailors,” he explained.

“There are 100 days left until the race kicks off, with some important team time along the way. I’m definitely satisfied that we’re in a good place and setting the team up with a solid chance of taking the crown.”

The team is currently preparing to travel to Gosport, UK, for pre-race activation and Leg Zero commitments, lining up against the other teams for the first time in the Round-the-Island race during Cowes week, followed by the Rolex Fastnet Race, and finishing up in Lisbon after sailing via St. Malo in mid-August.

The race departs from Alicante on 22 October 2017 and takes in a total of 12 Host Cities around the world, finishing in The Hague at the end of June 2018.