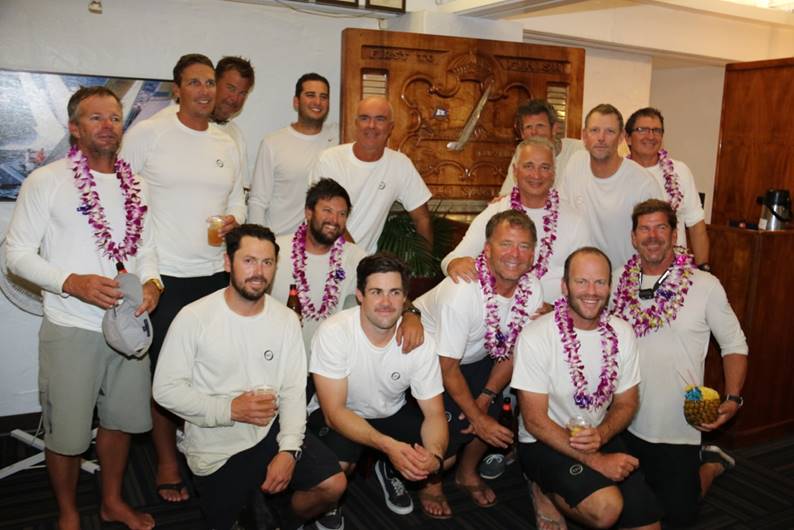 HONOLULU, HI – In the pre-dawn hours this morning, Manouch Moshayedi's Bakewell White-designed Rio 100 crossed the finish line at Diamond Head to be the first-to-finish monohull without powered assistance, and thereby winner of the historic Barn Door Trophy in the 2017 Transpac. With an elapsed time of 6 days 17 hours 9 min and 9 sec, Rio 100 once again joins a long and storied list of classic ocean racing yachts that have won this trophy every other year since it was first awarded to H.H. Sinclair on Lurline in the very first Transpac race in 1906… It may be interesting to note Lurline's time was nearly twice that of Rio's.

“I credit this great crew for this victory,” said Moshayedi, clearly relieved to have finished both intact and ahead of their nearest qualified rival for the Barn Door, Frank Slootman's Pac 52 Invisible Hand. “Their expertise and seamanship saved both the boat and our chances to repeat last year's win.”

The repair affected by the team to cover the hole in their hull at the lower rudder bearing of the broken port rudder were impressive – a plastic panel was cut from a spare water tank and fashioned into a patch and screwed and glued with support rods keeping it in place. The repair held and the team finished with the emergency rudder in place for the final run into the finish. 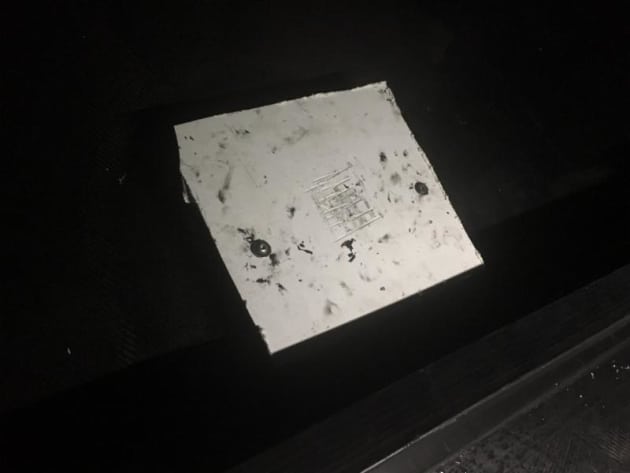 With the suggestion made by TPYC Commodore Bo Wheeler, the team took a group photo with the trophy at their Aloha party at Waikiki YC, just before the effects of jubilation fueled by mai tai's had many swimming in the pool.

Next in line at Diamond Head several hours later with an elapsed time of 7:01:20:10 was Invisible Hand, the latest-generation Pac 52 whose design heritage started here with this race. Unlike the current-generation TP 52 class yachts competing in the 52 SuperSeries events in Europe, these boats have higher freeboards for livability below decks and less water on deck, and are built to meet Category 1 offshore safety regulations.

On board with Slootman was one of the Pac 52 Class originators Gavin Brady, who came up from his native New Zealand to compete in this year's race. After downing a pineapple Mai Tai at the dock, Brady and team with discipline pulled out their sails, flaked and bricked them, even a blown-up A2 spinnaker.

When asked if this sail casualty hurt them, Brady said, “Nah, we had two other A2's of slightly different design. These were the only kites we had aside from an A4 if it got really windy.”

Reflecting on the race, one of several Transpacs he's done (last year with Rio 100), Brady said, “This is a great race, and the boat was great too. This new generation of Pac 52's are getting back to the original offshore/inshore design concept. We were fast, but I told the guys we had another 10 miles a day we could squeeze out of the performance if we were more aggressive on gybing on shifts.”

When asked if they thought they had a chance to catch Rio when she was limping a few days ago, Brady said, “Not really. We knew they were going to gybe over to port and then ramp back up to their normal speeds.”

Right now Invisible Hand enjoys a five hour corrected time lead over their fellow Pac 52, Tom Holtus's Bad Pak, who in turn is currently fighting to preserve their slim three-mile lead over the ex-Invisible Hand, Steve Maheen's R/P 63 Aszhou. Both boats are flying into the Molokai Channel now at 15+ knots, so three miles whizzes past in only 12 minutes. No doubt both crews will be pushing to the edge to their finish here mid-afternoon Hawaii time.

The currently favorable performance on corrected time of the Pac 52's may be due not only to superior design and sailing abilities of the crews, but also to weather: the wind is lightening further up course where boats speeds are down a knot or so across the fleet.