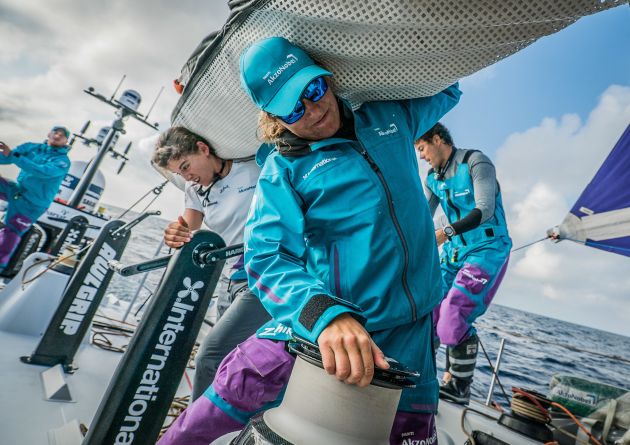 An eventful opening 24 hours in the Volvo Ocean Race has seen skipper Charlie Enright’s Vestas 11th Hour Racing grab the lead as the fleet converge on the Strait of Gibraltar. The Vestas boat, along with team AkzoNobel, were the first to make a break for the Spanish coast as night fell on Sunday evening, where they benefited from favourable conditions and emerged in front of the fleet.

“We took the inshore route with good angle and we know we crossed ahead of the fleet when we converged with them again,” explained Enright. “For now the only boat in sight is AkzoNobel. But we like our sail set up. We feel like we’re going through the water well.”

That’s an understatement. On Monday afternoon, the team, along with second placed AkzoNobel, is picking up a nice shift as well as increased pressure and the leading pair will likely extend their lead into the Strait.

For team AkzoNobel, it’s been a whirlwind 24-hours. After three of the team’s most experienced crew elected not to sail Leg 1, reinstated skipper Simeon Tienpont submitted his final crew list just an hour before leaving the dock. But the new configuration has been on fire since leaving Alicante, and at the 13:00 UTC position report was in a solid second place.

Splitting the difference between the northern and southern tracks has been David Witt’s Sun Hung Kai/Scallywag team, fighting hard now to hold off MAPFRE, who will be just a few tenths of a mile behind.

In contrast, Dongfeng Race Team, one of the pre-race favourites, has fallen back since leading the fleet out of the host city of the event, Alicante, Spain.

“Last night we lost a lot. We are in 5th or 6th position, which is hard for us,” said Chen JinHao (Horace) on Dongfeng this morning. “Pascal and Charles were working all night so we can be faster. It was a bad night, but sailing is sailing. We can come back!”

Of course it is very early: one day into what is projected to be a six or seven day, 1,450 nautical mile leg from Alicante to Lisbon, Portugal. And certainly the leaders are under no illusion as to what awaits them after the passage through one of the busiest stretches of water in the world.

“The race won’t be won or lost (in the Strait),” Enright said. “And there’s a big patch of light breeze waiting for us on the other side.”

The wind is forecast to build through the Strait and for the exit into the Atlantic. But overnight, it will ease, and the concertina effect may bring the backmarkers back into the leaders. In a very real way, the race has just started.