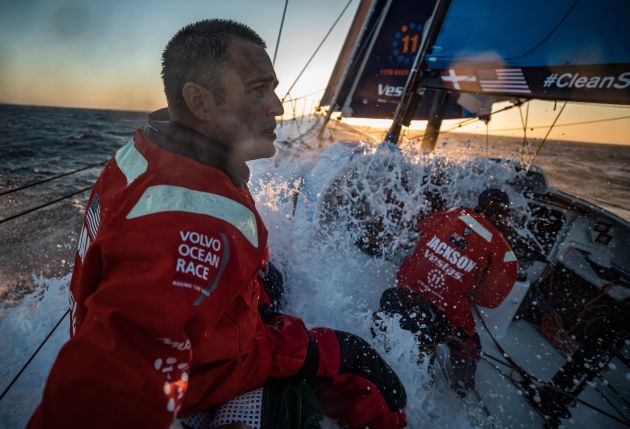 The Volvo Ocean Race fleet was punching into the Atlantic on Tuesday after surviving their first test from the weather gods through the Gibraltar Strait overnight.

Vestas 11th Hour Racing still occupy the top spot after a challenging first 50 hours of the opening leg from Alicante, Spain, to Lisbon, Portugal, that has seen them dominate the leaderboard over their six rivals.

At one point skipper Charlie Enright's crew stretched out their advantage to more than 27 miles as they were catapulted out of the Strait by following winds gusting as high as 35 knots.

“We had a good night overnight, getting fired out of the Gibraltar jet,” Vestas 11th Hour Racing navigator Simon 'SiFi' Fisher said. “We were happy to wake up to see that all of the boats are behind us and mostly on our line.”

However that lead has started to be whittled away as the frontrunners reach painfully light winds blocking their path south west as they point for the turning mark at Porto Santo in the Madeira Islands.

Although Vestas 11th Hour Racing still have a comfortable 19-nautical-mile buffer, the 1300 UTC position report revealed that speeds on the blue boat have dropped to an excruciating 1.7 knots.

Meanwhile Spanish crew MAPFRE, the real winners overnight rocketing from fourth to second, were making 11.4 knots – the fastest in the fleet – from their position as the northernmost boat.

MAPFRE skipper Xabi Fernandez worked his team hard through the night, putting in 11 gybes to stay within a narrow band of pressure.

The effort paid off, and MAPFRE were able to overhaul both Sun Hung Kai/Scallywag and team Akzonobel.

“It was tough conditions with winds up to 35 knots, and we had to throw in some gybes,” explained MAPFRE navigator Joan Vila. “Right now we are waiting for the shift to gybe to port, and then we know it will become very tricky and light. To be honest, anything can still happen in this leg.”

In stark contrast to the past 24 hours of full-on downwind action the breeze is forecast to drop to less than seven knots and swing 180 degrees, resulting in the fleet sailing upwind in light wind mode.

Lying between them and Porto Santo is an enormous wind hole 100 nautical miles wide which the navigators must carefully pick their way through.

It is highly likely to have a concertina effect on the fleet whereby any gains made thus far are largely wiped out as the fleet compresses.

That's bad news for the leaders but will be welcomed by the likes of Dongfeng Race Team, Turn the Tide on Plastic and Team Brunel further back down the track.

Turn the Tide on Plastic boat captain Liz Wardley said they were happy to have just made it through their first big breeze test in one piece.

“It got pretty hairy last night and we ended up with 36, 37 knots of breeze downwind gybing through the Strait, avoiding the traffic separation zone,” she said. “But we got through it pretty well mid fleet, and now the breeze is slowly dying out. In a few hours' time we're probably going to have a very different breeze of five to seven knots. We've had a few transitions to go through and we're just crawling back into the fleet now after a few losses last night. We've got good speed on the guys around us so we're looking good.”

The fleet might be slowing down but the action is just heating up.