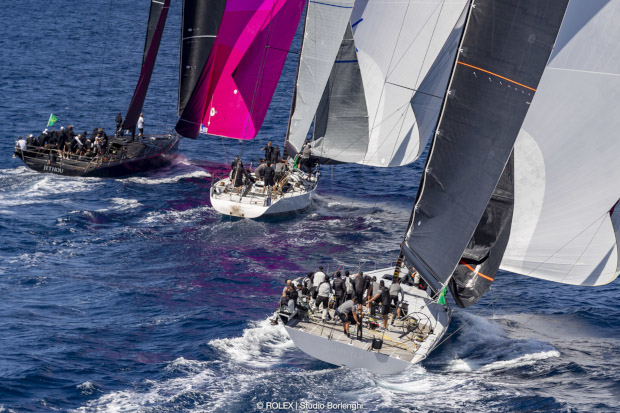 Rolex Capri Sailing Week is providing a complete test for its competitors, and if yesterday was a lottery thanks to the intermittent breeze, today there was a steady 9-12 knot south-easterly with Vesper taking control.

In this the race committee laid on a giant windward-leeward spanning the Gulf of Naples for the maxis, with the leeward mark off the island of Ischia for the maxi racers and two miles short of this for the racer-cruiser and cruiser-racer fleets. The finish line was located immediately off Capri’s Marina Grande.

Today it was the turn of American Jim Swartz’s maxZ86 Vesper to take control. The US team, led by former America’s Cup skipper, Gavin Brady, are still finding out about their new steed on just their third day racing her, against the highly refined Jethou and Caol Ila R boats and crews.

“Conditions were better with a nice steady breeze today and that makes a big difference,” said Swartz. “Being heavier we don’t adjust nearly as quickly as the 72s – shifty is fine, but a pulsing wind is more challenging. Anyhow – we are learning the boat more every day.”

Strangely, en route back to Capri, the maxi racer leaders all chose to take a long starboard tack deep into the Gulf of Naples, Vesper more than the others.

Of her sightseeing trip towards Mount Vesuvius, Brady explained: “When you are on a big maxi you have to pick your side and go and get the shift. When we are over layline, we can use that because we are so long – you let the jib out and twist the main, like a multihull – and you can use that extra speed.”

While Vesper was first on the water, Alex Schaerer’s modified maxi, 72 Caol Ila R, won on IRC corrected time among the maxi racers.

Schaerer attributed this partly to their tactician, local hero Francesco de Angelis. “He called the shifts methodically – that’s how we could keep up with Jethou all the way down and were so close at the bottom mark. That helps because Jethou goes very fast upwind, especially when it is blowy.”

De Angelis added: “The steady wind was really good for testing the skills of the teams and checking boat speed.” However, he added that on Caol Ila R, they have to work hard to keep up with Jethou, especially now that the black boat has grown five foot over the winter.

It also came as little surprise Vesper being first home. “She is a bigger boat and on longer legs with no traffic, they can put the hammer down.”

A second place today for Sir Peter Ogden’s Jethou has launched her back into the lead with a 1.75 point lead over Caol Ila R in the maxi racer division.

In the Maxi Racer-Cruisers it was the turn of Twin Soul B, the Mylius 76 of Luciano Gandini to claim a bullet, winning by almost two minutes under IRC corrected time ahead of Vincenzo Addessi's Mylius 1835 Fra Diavolo, with Jean-Pierre Barjon's Swan 601 Lorina 1895 third.

“Today it was finally Capri with stable wind,” enthused Gandini, who is also President of Mylius Yachts. “Today we found our speed and we are finally learning how to handle the boat. I’m pleased to see all the other Mylius boats doing well too.”

In fact Twin Soul B spent the day match racing the Spanish Swan 80 Plis Play, the largest yacht in the cruiser-racer division. “It was good for us to have such a ‘rival’ to race against,” observed Gandini. “Twin Soul B is better in strong winds, but as soon as the winds get lighter Plis Play prevails.”

Overall in the racer-cruisers it remains Lorina 1895 that leads, now by 1.25 points ahead of International Maxi Association President Benoît de Froidmont and his Wally 60 Wallyño. In the race for the Mylius Cup, Aldo Parisotto's Mylius 65 FD Oscar3 remains on top, her string of wins finally broken today with a third place.

Among the cruiser-racer maxis Riccardo de Michele's Vallicelli 78 H20 remains on the ascent. Yesterday's winner today finished second to Vicente Garcia Torres' Swan 80 Plis Play but still has some way to go tomorrow as she currently holds third overall, 2.5 points behind the Spanish Swan and tied on points with the Swan 651 Rosbeg, chartered to previous owner Ricardo Pavoncelli for this event.

De Michele felt H20’s day was so-so. “We raced quite happily, but in our division we have a very strong competitor [in Plis Play] – and we only saw them at the start. Still, we finished second so we are satisfied.”

While H20 has proved herself a weapon at the Maxi Yacht Rolex Cup, where last year she scored straight bullets in her class, this is her first time racing in Capri and De Michele says he would like to return next year with H20 better race-prepped.

Tomorrow is the final day of the Rolex Capri Sailing Week and given that Plis Play’s 2.5 point advantage is the largest across any of the three maxi classes, there is still much work still to do for everyone in determining their final result.