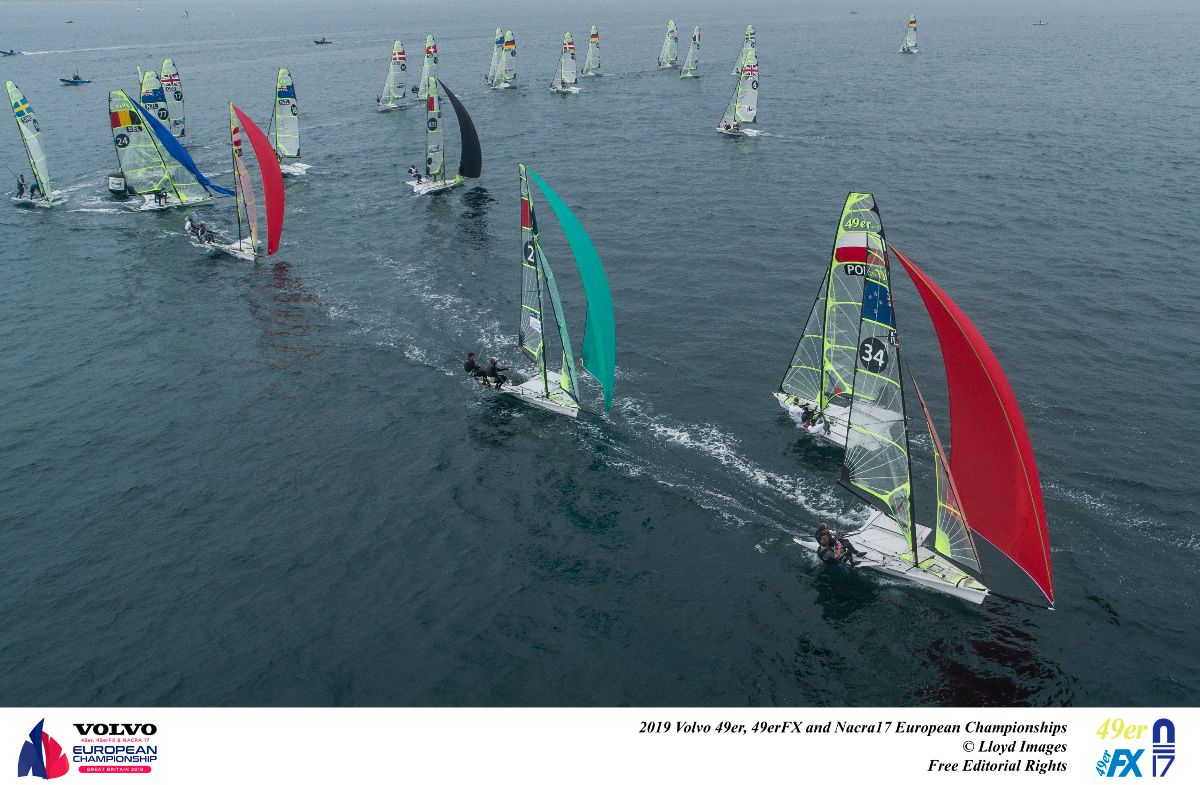 A light and tricky final day of fleet racing has mixed up the Nacra 17 leader board and made it an out and out battle for the top spots going into the Medal Race, and with just 12 points separating the top six boats, it means anyone of them could come away with the win, but equally come away missing the podium altogether.

An incredible late surge from Ben Saxton/Nicola Boniface (GBR), clearly loving the lighter winds at the tail end of this week’s competition, have brought them into contention for the medals having been hanging outside all week.

They scored a 1,2 today winning the day and putting leapfrogging themselves into second, only 4 points behind the leaders Ruggero Tita and Catarina Banti (ITA), who struggled a little today in the really light conditions scoring a 23, 11 but still doing enough to stay at the top.

Further down the pack with a brilliant final day of a 4,5 and just scraping into the Medal Race in 10th is Olympic gold and silver medallist Nathan Outteridge, sailing with his sister Haylee Outteridge (AUS). Fairly new to the Nacra 17 fleet but clearly getting to grips with the boat quickly – we wouldn’t expect anything less from this pair.

They’ll need to start ramping things up quickly with a tough battle on their hands to qualify themselves for Tokyo 2020 as their rival, Australian team mates and Rio Olympic silver medallists, Jason Waterhouse and Lisa Darmanin – not here this week due to an injury for Jason – have won the last three Nacra regattas they’ve sailed in, showing incredible form and consistency.

With the points so tight at the top, it’s going to be a nail biting Medal Race for the top 10 in the Nacra fleet. With Olympic Test Event spots up for grabs, a European title on the line and many teams wanting to stamp their authority on the fleet as we begin to look towards the final year to the Olympic Games in Tokyo.

Tomorrow’s Medal Race will surely be a key indicator as to which of the 6 top teams can keep their nerve and perform under huge pressure when it really matters.

49erFX: Scandinavians deliver while leaders falter
On the penultimate day of Gold fleet racing, after a postponement the 49erFX Gold was up first in the harbour course, to battle in the light winds for positioning going into the Medal Race.

It was a day for the Scandinavians to shine, with the Danes having led from the left to round in first and third at the top mark and the Swedes in second and fourth.

The young Swedes dropped back to third by the finish, while the Poles moved through the fleet to second, and the Danish team of Schütt/Nielsby was able to stay on top and take the win. The top five from the overall leaderboard in the morning were all super-deep in the race, with most sailing their throw-out in the first race.

Race 2 says the other Danes learn from their team mates and their own fourth position in race 1, to replicate the pin end and left side favour to round at the top mark in first and run away with the win.

The young Swedes Bobeck/Tengstrom were again in the fight, finishing third while the Finnish climbed through the race up to 2nd place. Again many of the top boats were deep in the fleet, which allowed the Swedes to jump up from 6th in the morning to third overall heading into the Medal Race.

Regatta leaders, the Brazilians Grael and Kunze, followed their 11th in race one with a 21st in race two, but still lead overall by 19 points. Behind them the Dutch Bekkering/Duetz also had their worst day with a 23, 11, but still sit second overall. For them, it is all to play for tomorrow to stay top three overall, which they need to do to win the Olympic spot for the Netherlands qualification system, since their NED competitors are now out of the running for the Medal Race.

The young Swedes, Bobeck and Tengström, have really proven they are a force to be reckoned with and rising stars in the fleet, nailing the light airs today as well as the breeze earlier this week to sit only 6 points back in third overall, but tied with the Norwegians on points. The Kiwis had a difficult day to drop to 5th, but still in the hunt for the medals along with Denmark’s Nielsen/Olsen, who won the day with their 4,1.

It was a huge day of shuffling on the scoreboard, and Sunday will be a contentious battle among all the fleets, particularly for the crowning of the ‘European’ Champions. Make sure in the 49erFX to keep an eye on NED’s Bekkering/Duetz battle for their Olympic spot, and on the rising young gun Swedes for whether they can perform when the pressure is really on.

49ers: Kiwis are mortal but still hard to beat
The legendary New Zealanders, Pete Burling and Blair Tuke, displayed some chink of mortality in the last race of the day by finishing 19th. However, their other scores of 3,6 put them in a strong position going into the final day of 49er European Championship on Sunday.

The south-westerly breeze was very light out in Weymouth Bay, with the sailors bending their knees for the first time this week, in what has been a predominantly windy regatta. Diego Botin and Iago Lopez Marra have been chasing the Kiwis hard all week, but looked out of sorts today.

After a solid start to Saturday with a 6th place, the smiling Spaniards could only manage 15th and 16th in the next two heats. Dylan Fletcher and Stu Bithell had a somewhat lacklustre outing with 7,12,14, yet the British team have moved ahead of the Spanish to hold second place overall by a single point.

Another British crew, James Peter and Fynn Sterritt, were able to close the gap on the top three thanks in particular to a runaway victory in the second race of the afternoon.

The Rio Olympic bronze medallists Erik Heil/Thomas Ploessel must have dreamed of being able to move into podium contention after winning the first race of the day, but could only follow up with two scores in the 20s. It leaves them in 6th overall, just one point behind their team mates and training partners, Justus Schmidt and Max Boeme.

Best performers of the day were Will and Sam Phillips who might have surprised even themselves with such a strong scoreline of 11,3,1.

The Aussie brothers absolutely owned the final race as they sailed away to a victory of more than 200 metres. While they’ve always been strong in the strong winds, including some storming performances earlier this week out in the big waves, today the Southern Cross siblings proved they’re no one-trick ponies and are world-class contenders in the lighter breezes too.