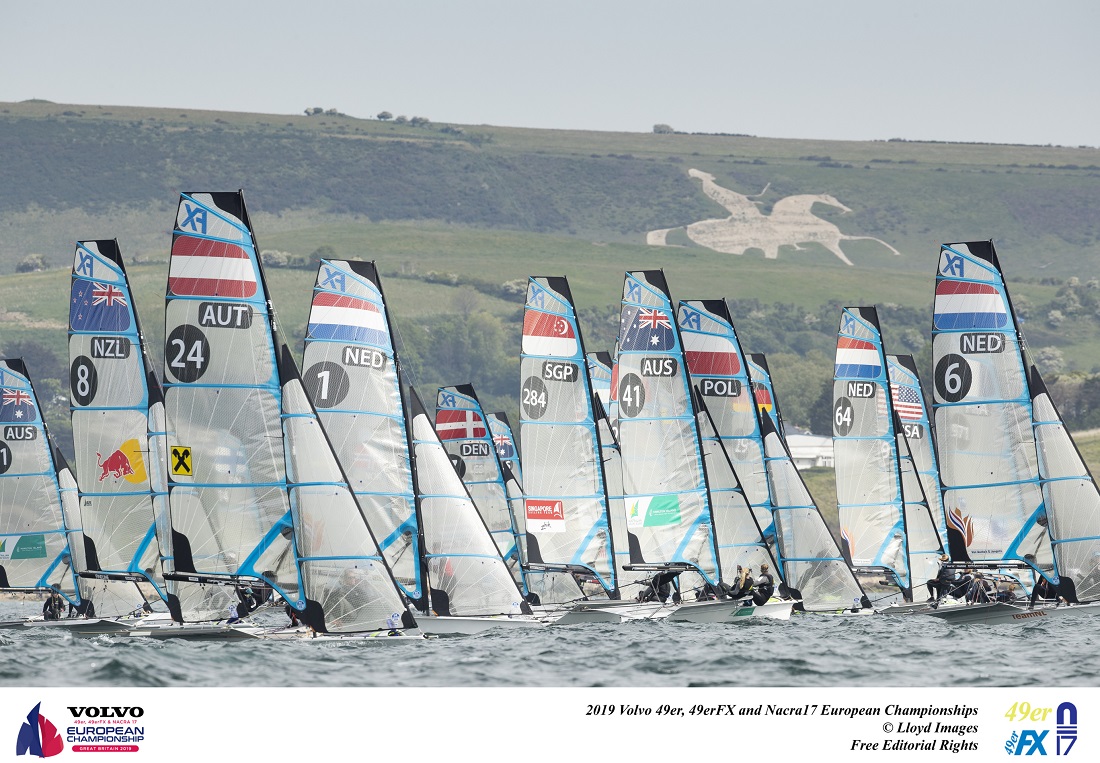 Another testing day on Weymouth’s Portland Harbour when 14 plus knot shifty winds were dished up on Day 5 of the 49er, 49erFX and Nacra 17 European Championships at Weymouth, a day that the Australian Sailing Squad’s Will and Sam Phillips made a comeback to hold eighth place in the 49er Gold fleet.

Victoria’s Phillips brothers put the disappointments of yesterday behind them and came out firing. They finished third in the first race of the day and backed up with fifth in the second to lift from 14th to eighth overall.

“It was definitely a better day than yesterday,” a relieved Sam Phillips said. “We had two good races and one ordinary one. It was difficult to come back from a bad day. An important factor today was to be able to debrief, re-group and put it behind us,” he said.

The 49er Gold fleet sailed on the outer harbour and experienced big wind shifts. “They were mostly on the left hand side track; you wanted to be going hard towards the left and choosing good lanes to tack in,” Phillips explained.

“We’re likely to have two or three races tomorrow, but we don’t know yet. Whatever happens, we’ll be concentrating and giving it our best shot. Hopefully we’ll have a good day on Saturday and move up the board further.”

The brothers started sailing together around 10 years ago, but went their separate ways in 2012 before reuniting in 2015.

“Will was sailing with another guy and when that ended we decided to jump into Will’s new boat and race for a bit of fun, but it worked, because we had good results at the end of the last quadrennium. That motivated us to keep going and do another campaign,” Phillips ended.

Racing for the 49er Silver fleet was held after the Gold fleet races. The three Australian teams came back to shore with assorted results. Thomas Needham and Joel Turner moved up two places to 32nd, while Jim Colley and Shaun O’Connor had the best day to be 35th in the standings ahead of David and Lachy Gilmour who maintained 37th. Kurt Hansen and
Simon Hoffman shifted from 45th to 42nd overall.

Northerly winds coming off the cliffs on Portland Bay were shifting as much as 20 to 30 degrees, keeping all competitors on their toes. Miss a single shift and you were spat out to the back end of the fleet. Coupled with multiple General Recalls in all classes, it was not an easy day on the water.

General Recalls were bound to happen as the Olympic classes regatta comes down to the nitty gritty and competitors fight hard to better their results ahead of the Medal Races.

Siblings Nathan and Haylee Outteridge finished best of the two Australian pairings. In 13th place with a best result of fourth in Race 15, they have a lot of work ahead if they are to make the Medal Race.

Paul Darmanin and Lucy Copeland started the day slowly, but ended it well with third and ninth places in the last two races of the day. It meant the NSW athletes moved up the leaderboard from 23rd to 19th.

Three races were sailed on the outside course in the 49erFX, bringing the total to 15 races, inclusive of two drops. There are three Australian Sailing Squad teams representing in Weymouth and Tess Lloyd and Jaime Ryan enhanced their chances of making the Medal Race as the best performed of the trio.

Lloyd and Ryan’s 15,7,11 scores moved them up from 17th to 12th overall, leap frogging fellow Australians Natasha Bryant and Annie Wilmot, who dropped to 13th when they struggled to finish better than 11th. However, the two teams are on equal points, so will no doubt push each other hard to try and make the top ten for Sunday’s Medal Race.

“There were more shifts, so therefore more opportunities on the race course,” Lloyd said. “We started early today at 10am and the breeze was dropping off through the day. Racing is tight, as you would expect in the Gold fleet. Every little mistake is painful.”

The Victorian athlete said Weymouth has been a very good learning experience for her and Ryan: “We came over here wanting to work on windy and wavy conditions and we’ve had a couple of days of that. It’s helped work things out for the future.

“It’s good being in the mix with all the top girls again. This week has been full-on; no rest days. The regatta has been about recovering in time for the next day and staying refreshed and switched on,” Lloyd finished.

Amelia Stabback and Caitlin Elks also improved their position, moving up two places from 26th to 24th overall, with a best result of eighth in Race 15.

There are more fleet races to come on Saturday and Sunday before Sunday’s Medal Races.

The Australians in Weymouth are facing the world’s best as they campaign towards selection to the 2020 Tokyo Olympic Games.