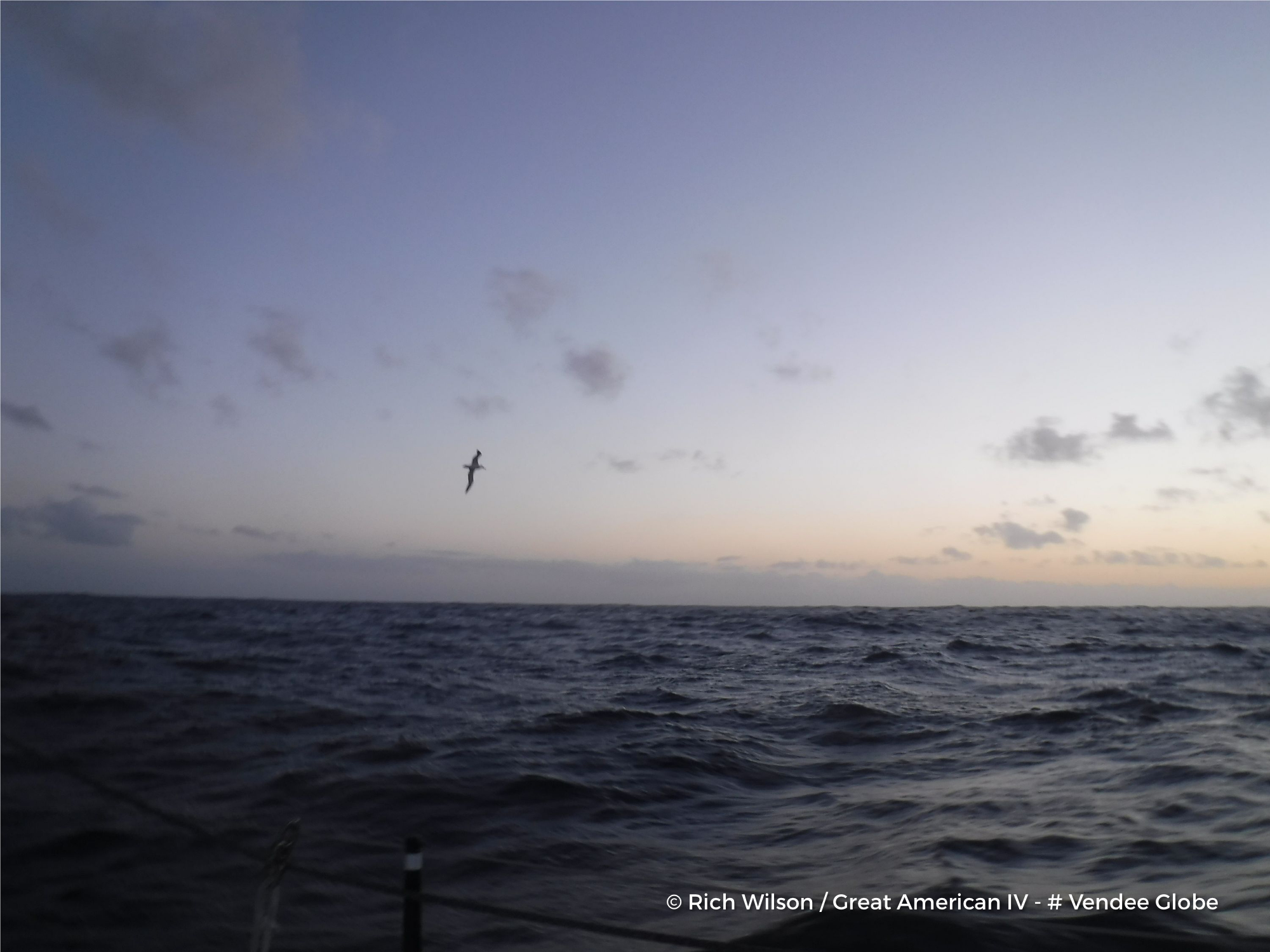 View from onboard during the Vendee Globe. Photo Rich Wilson/Great American IV.

For Alex Thomson and Armel Le Cléach'h the leaders of the Vendée Globe, Sunday morning should provide some time to regroup mentally, to snatch some rest, to thoroughly check their boats and to somehow prepare for the next battering.

Their passage of the International Date Line does in theory give them two Sundays in succession – a proper long weekend – but sadly there is no chance of their anticipated short break from a brutally tough sequence of storms being doubled. There will be little time before a second system tests Thomson and Le Cléac'h and their boats, and sets a fork in the road, a choice of options which may have a significant bearing on the time difference between the two at Cape Horn in around 11 days time.

The British skipper reported to his team today that he is fair shape, physically and mentally, but was very much looking forward to quieter weather.

“Alex is still crawling around the boat. It is impossible to move around at all. He is pretty tired as you would expect. But he seems to be OK.” Ross Daniel, the Alex Thomson Racing Technical Director confirmed this afternoon.

Le Cléac'h has strengthened his position to lead by 190 miles this Saturday afternoon and as Thomson passed to the north of Auckland Island today, the French skipper was on a course more than 100 miles south of his, already angling more south-east. Le Cléac'h will skirt the Antarctic Exclusion Zone, with the objective of getting under the centre of the new low pressure to break into the northerly breeze first. Thomson's route to the north means more miles in theory but while Le Cléac'h may well have some time with a tighter wind angle – possibly even upwind – Thomson is looking to get into the faster downwind conditions on the top side of the low. It is a question of timing. If it works out for Le Cléac'h it could add significantly to his margin. But other routings today suggest there could still just be hours between them in four days' time.

Romain Attanasio is delighted to be back on the racecourse after completing a repair in Simon's Town to the south-east of Cape Town. The French skipper of Famille Mary- Étamine du Lys) had a two-metre long delamination on his hull as well as having to replace one rudder with a spare and making an accomplished composite repair to the other snapped blade. After a diversion which has cost him five ‘crazy' days, Attanasio has set off in pursuit of Didac Costa who had to return to Les Sables d'Olonne one hour after the start because of a flood inside the boat. He took up the course again four days later and is now some 200 miles ahead of Attanasio, setting up the prospect of a nice duel between skippers with famous IMOCAs which have already seen their share of round the world races. Attanasio's boat is the 1998 Lombard design, former Whirlpool, which raced the last edition as Tanguy de Lamotte's Initiatives Coeur. Meantime Costa – who passed the Cape of Good Hope at 0537hrs this morning- has already raced one lap of the planet on the 2000 Owen Clarke Design, Ellen MacArthur's former Kingfisher. The fireman and co-skipper Aleix Gelabert were impressive in their sheer consistency in the last Barcelona World Race, and Costa is back making the same high, regular average speeds.

Attanasio is the only skipper of this race so far to make a successful repair, leaving the rarefied Vendée Globe bubble to interact with the outside world. As ever one battle was to make sure there was no inadvertent outside assistance. He was approached by many curious canoeists at the popular tourist spot which is close to the HQ of the South African Navy, and was even offered cans of Coke and stickers by one woman. His lasting impression, other than the frenetic efforts to make his repairs, was the sheer, sudden unadulterated silence after one month of banging and crashing and constant movement at sea.

“It was quite special to find myself at anchor right next to the coast in the middle of the Vendée Globe. The first day, people were circling the boat in canoes. They came to talk to me and one lady even wanted to give me some coke and stickers. I told her I couldn't take them as I might be disqualified. What struck me most when I arrived though was the silence. I'd been living in a noisy environment and suddenly… nothing! I began to talk very softly. It was a funny feeling.”