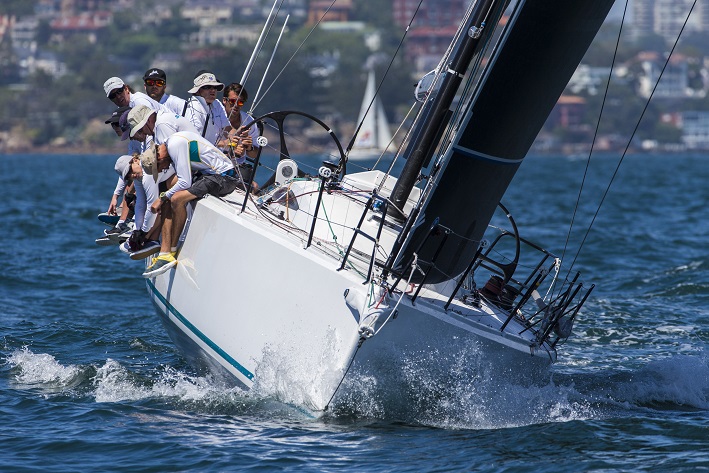 Karl Kwok’s Team Beau Geste and Larki Missiris’ Wld1 have capitalised on their leads of yesterday to win the CYCA Trophy-Passage Series this weekend.

In Division 1, Team Beau Geste, a TP52 representing Royal New Zealand Yacht Squadron, was unstoppable again in the 24 nautical mile course from the start near Shark Island to Botany Bay to the finish in Watsons Bay. Steven Proud’s Swish was second in the race to finish second overall, with the Brenton Fischer skippered TP52, Ragamuffin third and third overall.

Kwok flew in from Hong Kong especially for the event and Tuesday’s SOLAS Big Boat Challenge, before he flies home to family celebrations.

“I am lucky to have Gavin (Brady) who puts together a wonderful crew. Gavin gets people who are not prima donnas – they are happy and work as a team. I have been sailing international events since 1995 and Gavin has been there, always making space for younger crew, like those from Royal New Zealand Yacht Squadron’s Youth program.

“As we get older, the youths will come and take over – they need to be trained first, and this is what we do.”

Of the weekend’s racing, Kwok said: “I always consider Sydney one of the two best places to sail in and out of in the world, so of course I enjoyed the regatta. I was here for the SSORC and I will be back next year. Now Aaron Rowe has promised to sail the boat in all the pre-Hobart regattas next season and I will be back for the 2017 Sydney Hobart – 20 years since I won in 1997,” he ended.

Come Boxing Day, Beau Geste’s crew will swap this smaller Botin TP52 for Kwok’s Botin 80, when they will join the other 92 entries in the Rolex Sydney Hobart, but Kwok will leave the boat with Brady and Rowe.

Taylor’s boat got off the start well and sailed into clear air and stayed in front of her rivals, but there was only a minute between her and Nine Dragons at the end, with Wild1 not too far away.

“The wind was more than predicted, which suited us,” Taylor said this afternoon. “Twelve to 16 knots, flicking between north-east and east-north-east, it was a lovely summer’s day sail.”

The Victorian dentist said the two reaching legs made the difference. “It’s what the boat was built for, so it was perfect for us. Shame we blew up a winch – hope we can get the parts in time,” said Taylor ending, “I’m disappointed there weren’t more boats. We come and do this regatta every year because it’s great practice before Hobart and we don’t get to sail here much.”

What was one man’s gift was another’s downfall, as overall winner Missiris did not enjoy the two reaching legs.

“They weren’t suited to our Sydney 38 – the bigger boats mowed us down, but the seaway was a lot more comfortable. Congratulations to Chutzpah, they sailed a great race. With Black Sheep and Nine Dragons, they kept us busy – we were keeping Nine Dragons in Birdseye view – she was our main threat,” Missiris said.

“I want to thank my crew: Cooper, Jacob, Poddy Mouth, Jungle, Jensen, Pete, Mitch, Shorty, Hedgey, Fat Matt, Vaughany and Andrew – they did such a good job this weekend and the boats been good to us. “It’s been a fantastic regatta thanks to the CYCA,” he ended.

The Cruising Yacht Club of Australia traditionally holds the event each year to allow yachts entered in the Rolex Sydney Hobart Yacht Race and other summer yachting events the opportunity to put in some final practice.

For daily and full results log on to: http://www.cyca.com.au/sysfile/downloads/2017_summer/index.htm