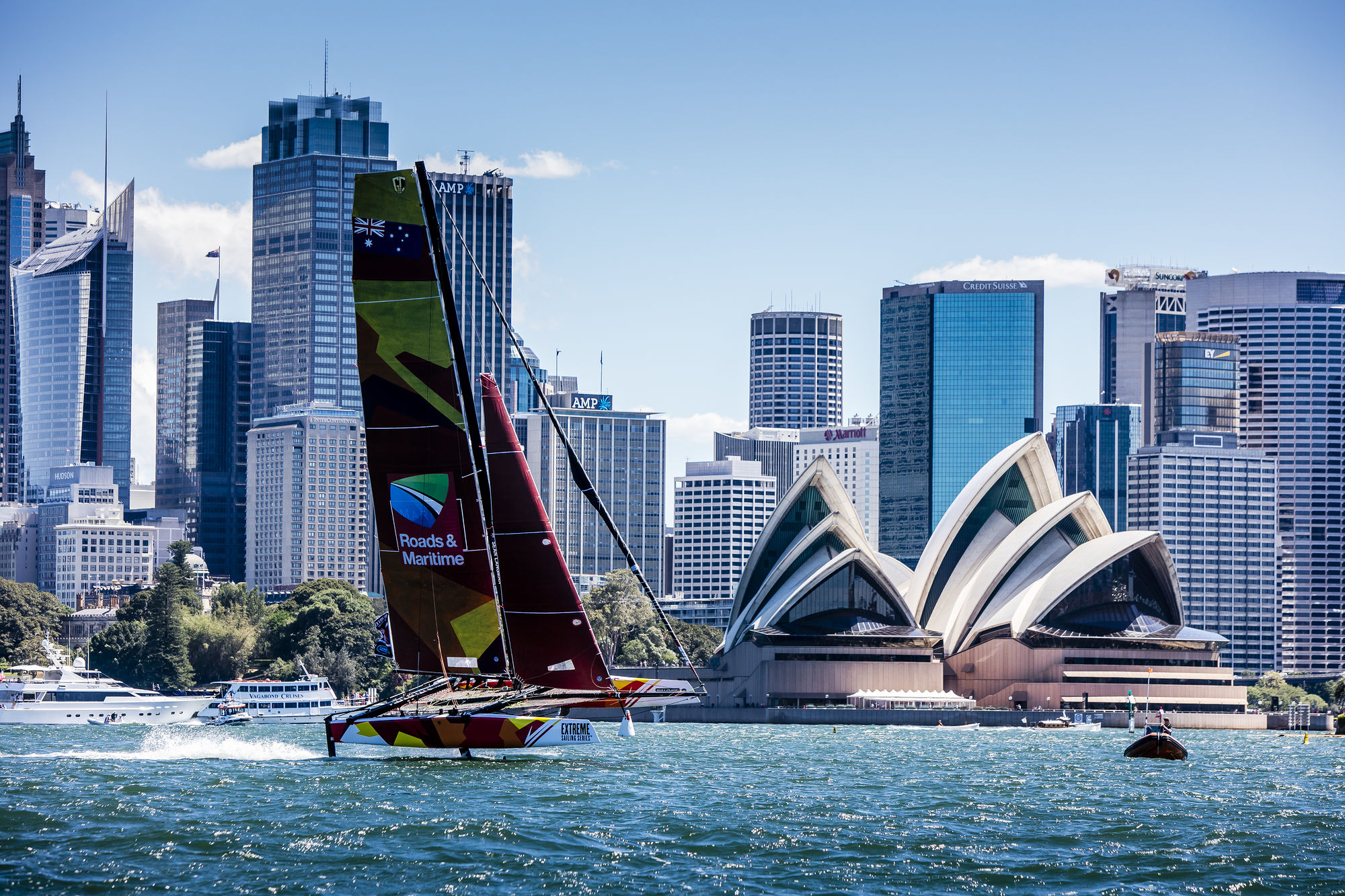 Just two points split Extreme Sailing Series™ title contenders Alinghi and Oman Air at the halfway stage of the final Act of the 2016 season as Sydney delivered another bout of epic racing today.

Swiss crew Alinghi remain in pole position after two days of breathtaking action on the iconic waters of Sydney Harbour, but it couldn't be tighter at the top as the battle between the two Series frontrunners intensifies.

Bright, blustery conditions greeted the eight-strong international fleet as the big breeze from yesterday's thrilling opener, which featured two capsizes, returned for another round.

With unpredictable winds gusting from 15 to 30 knots whipping across the Stadium racecourse the decision was taken to split the fleet in two for the first four races to ensure the safety of the crews.

The teams were then brought back together for two incredible full-fleet clashes right in front of the crowds watching from the Royal Sydney Yacht Squadron, the hosts of the event.

At the close of play Morgan Larson's Oman Air had edged one point closer to Alinghi thanks to podium finishes in the full-fleet races compared to the Swiss team's uncharacteristic fourth and fifth respectively.

Vitally for Oman Air their solid results leave them within touching distance of Alinghi at the halfway mark of Act 8, as whichever of the teams score the best result here will win the 2016 Extreme Sailing Series title.

Red Bull Sailing Team, the only other crew that could possibly claim the title, lie five points adrift of the top spot in third place.

“Two points between us is better than we could have hoped for,” Oman Air skipper Larson said. “We left a bit of a hole after the two first races yesterday and the first two today, but we pulled it back with the last two races.

“If we're within five points of Alinghi at this stage then we're happy. We've still got two days to go and there are some different conditions ahead. I think this team is just getting started.”

Despite dropping a point to their arch-rivals, Alinghi co-skipper and helmsman Arnaud Psarofaghis insisted his team is under no pressure as they push for their third Extreme Sailing Series title.

“At the moment we don't have any pressure on us – Oman Air are the ones that have everything to lose,” Psarofaghis said, referring to the Omani-backed crew's season-long position at the top of the Series standings.

“We had good start to the day today but we didn't start well in the last two races. We were not in a good lane upwind and then struggled in the traffic.

“Everything is good though – we learn from our small mistakes from today and we'll be fine tomorrow. We're just looking ahead and taking every race as a new one.”

Both Land Rover BAR Academy and Visit Madeira made amends for capsizing yesterday by claiming impressive race wins, shooting up the Act 8 rankings into fourth and fifth respectively.

Neil Hunter's young British crew convincingly won their opening race of the day then obliterated the competition in the penultimate race.

Diogo Cayolla's Portuguese team rounded off the day in style taking the honours in the final race, their third race win of the 2016 season, crossing the line to cheers from the watching crowds.

“It feels really good to win,” former Olympian Cayolla said. “It was our target from middle of the season, we managed to win a race here and what a race it was. It was very challenging but when you manage to win in these conditions you feel so good.”