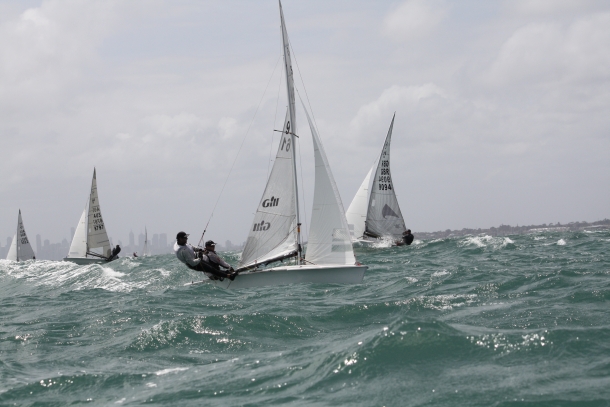 The variable weather from January 19th to 23rd provided a great week of racing at Black Rock Yacht Club for this year’s Australian 5O5 Championships.

The fleet of 24 was treated to the usual Black Rock professional race management and shared the course with the Finn Nationals.

Sailing conditions varied over 8 races, 15 to 20 knots in typical Port Philip waves, 10 to 15 knots steady and 4 to 7 knots shifty to test the best sailors in all conditions.

The top 10 competitors included 3 multiple Australian Champions, 1 Tasar World Champion and others consistently in the top 10 in past 5O5 Nationals.

On the last day Kevin Cameron / Sam Heritage (Qld) showed their true form with a “bullet” to secure the title with only 3 points separating the next 4 boats.

First female skipper Amy Lee, sailing with Justin Mulkearns (NSW), showed improving form during the series to show her as a threat to the men in the future.