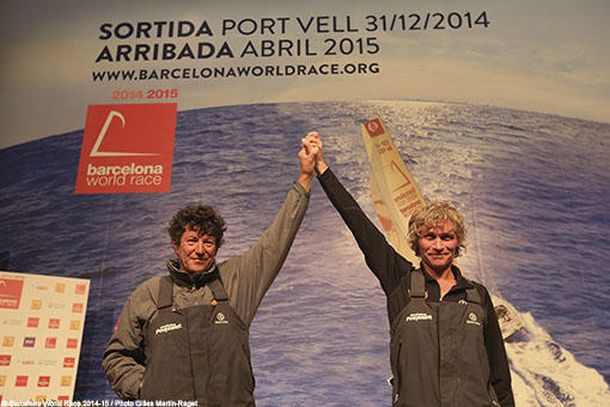 Bernard Stamm and Jean Le Cam have established the reference time for the race, which followed a different course for this edition: from Barcelona to Barcelona, passing all three great capes Good Hope, Leeuwin and Horn, leaving Antarctica to starboard. But for the first time the course went direct under New Zealand rather than diverting north to pass through the Cook Straits between North and South Island. This reduced the course distance by about 1280 miles compared with previous editions.

Bernard Stamm is a happy man this evening. Just before Christmas 2013, in fact during the night between 23rd and 24th December, he had to be rescued after his IMOCA 60 completely split in two in force 9 winds and 10 metre waves when he was delivering his boat back to Brest from Brazil after racing in the Transat Jacques Vabre. Stamm made global headlines, describing later how he knew that in order to survive he had to take to the icy waters of the Western Approaches 170 miles from the Scilly Isles to 'swim for my life'

A year later he started this round the world race, and now, today Stamm has achieved his third victory in a round the world race, the first one non stop and two handed. The 51 year old Swiss skipper had already won the 2002/3 Around Alone solo; and again in 2006/07, under the most recent name of Velux 5 Oceans.

Theirs has proven a remarkable partnership of close equals, a pair who have delivered victory thanks to their many, many years experiences, good and bad. They had never sailed together as a duo before this race, but had both achieved notable successes, racing two handed.

In turn, in his fifth round the world race , French legend Jean Le Cam, 55, known by some in his native France as “Le Roi Jean” (King Jean), adds his first ever outright victory in a round the world race to an extensive ocean racing record which stretches back 31 years, including second in the solo Vendée Globe in 2004-5 behind Vincent Riou.

In fact, now after winning 2013's Transat Jacques Vabre to Brazil with Riou, Jean Le Cam has won the two biggest IMOCA two-handed races back to back.

Le Cam, like Stamm, has also cheated death on the ocean, rescued by Riou from his capsized IMOCA 60 200 miles from Cape Horn during the Vendée Globe 2008-9.

He is one of the few French skippers to win La Solitaire du Figaro three times.

A winning boat. An IMOCA legend

The IMOCA 60 Cheminées Poujoulat is a monohull designed by the Farr design office, launched in 2007. With it, Michel Desjoyeaux won the Vendée Globe 2008/09, with an elapsed time of 84 days, 3 hours and 9 minutes. Stamm and Le Cam have made a very similar time including two Gibraltar Straits crossings and two Mediterranean legs. In the Barcelona World Race 2010/2011, this IMOCA 60 was second with Spain's íker Martínez and Xabi Fernandez as co-skippers.  It made the start of Vendée Globe 2012/2013 with Jérémie Beyou. The boat has been modified several times to adjust to the rules evolution and improve its performance in big waves. With two victories and a second place in round the world races, this boat is established as  a legend of he IMOCA class.

Three quarters of the globe as leader

Cheminées Poujoulat took the first place of the race on the 17th of January, when they overtook Guillermo Altadill (Spain) and José Muñoz (Chile) on Neutrogena in an intense head to head battle, approximately off Rio de Janeiro. Before Neutrogena, Alex Thomson (United Kingdom) and Pepe Ribes (Spain) had led the race until they lost the mast on the 14th of January. Stamm and Le Cam's rivalry with Neutrogena went on until Altadill and Muñoz had to pit stop for 24 hours in Bluff New Zealand on 12th February to repair an issue with their generator.

The arrivals of provisional second and third, Neutrogena and GAES Centros Auditivos, is expected between 30th of March and 2nd of April.

What are your first feelings?

Bernard Stamm: “First and foremost there is a great satisfaction. It all worked well, we managed to overcome all our technical problems and we can say that we have had enough of them.”

Jean Le Cam: “Certainly. I think that alone, we would not have finished the race. Fortunately Bernard knows well how to climb the mast.“

Bernard Stamm: “It's a team effort. The guy who's on the deck has to work as well, he has to grind to  hoist the one who will work up there. We had lots of problems but together we were able to find solutions. That is what is different from being two soloists on the same boat.”

Bernard Stamm: “For three months you share your race with someone else. When we had a technical problem, we were both thinking, we exchanged ideas. And all the time you are keeping the boat moving.”

Jean Le Cam: “And we had plenty of worries. We went half way around the world with a wind vane cobbled together on a little mast on the back of the boat, which we changed depending on what tack we were on. We finally got one to the top of the mast as you will see there is an external cable running up to it.”

Bernard Stamm: “We had also had lock worries on the mainsail. I can say that when we successfully repaired them, it was a moment of true happiness.”

What were the shared moments of happiness?

Jean Le Cam: “Inevitably, when we get to find solutions together, then you share that happiness together. We can't forget that we had a really windy south, it was a year to remember.”

Bernard Stamm: “And then there is also the pleasure of making a good move or two. North of Canaries before reaching Gibraltar that will be remembered. At first you are so focused and busy, but then like then you see the results and enjoy it.”

Jean Le Cam: “That's it. Two up you can really share, it is a really rich experience.”

Bernard Stamm: “If we had any problems with each other it was because we were tired or stressed or both, it was a reflex reaction and these just come and then they are gone as quickly as they came. We generally got on very well. We just focussed on making the boat go well, and as that is a difficult boat to handle, we just basically did not ever have any time to do anything but work on the boat, there was no time for arguments.”

Jean Le Cam; “We are still together. It is not La Vie en Rose. It is like being a couple. We each have carry our own cross. It is not easy for us. You just have to concede things to each other and get on with it, get through each day.”

Bernard Stamm: “I have wanted to participate in the Barcelona World Race since the first edition but have  not been able to, so to be able to compete this time, and to win it, is a great reward. I have had a lot of adventures, bad experiences on races, but I have had some great victories too. I have only ever won races which are round the world races.”

Jean Le Cam: “We always watched all the others, it is always interesting to watch what they are doing, and especially Bruno Garcia who I did the last race with, to see how they were doing. You have an interest in everyone, it is part of the daily life.”

Skills, how they worked the boat

Bernard Stamm: ” You have different skills. We covered everything together. I looked after the computer side of things and Jean did more of the techncial stuff on deck. We never, ever defined our roles as such.”