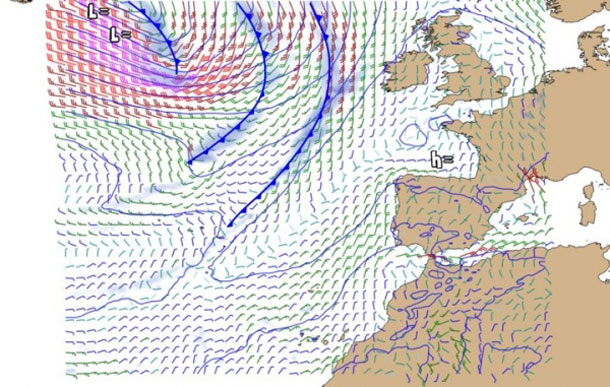 Likde all the other news coming out of Europe today, the weather for the race to Lanzarote for the Mini Transat promises to be light and shifty.

The skippers will have just a dozen hours or so to get into full race mode and head off through the lock at Port Rhu once the weather briefing concludes and then tumble directly into race mode.  At the moment, the weather forecast is promising a full menu: very light winds, strategic route choices, crosswinds and a final with a following wind that will propel the Minis at a quick pace towards the Canaries.  To follow the fleet, the Mini Transat îles de Guadeloupe will be create its own new map.

All time for reflection stops here as the Mini Transat îles de Guadeloupe gets underway. Organisers and racers pore over the  weather details,  create detailed scenarios about what could happen in the first stage, and build race strategies for the first part of the course, and decide on routes to take in the second.

Range of different winds
The range of different winds.Any way you look at it, the weather report  promises a stage rich in  twists and turns, where each sailor will begin to show their race strategy. The first hours  of the race should  should be sailed under a sign for light winds. Already, it looks as if the exit from the Bay of Douarnenez , up until the Sein  currents will  make people dig deep for different responses. However, the favourable current will change around 21 :00 and should allow the boats at the back of the race to make up some ground a rejoin the leaders. It’s here that the big competition should start, with a south-easterly wind easing off. The recommended race routes are out to the west, to get around a bubble of anti-cyclone  situated on the  most direct route.   The key issue will be to strike the right balance of finding  the gaps between the route necessary to catch the westerly winds and the  desire to not  to lose too much ground by taking a wide, circling route.

Sunday will become progressivley more favourable for the big guys who have the latest design boats. This will be the moment for the series Ofcet and Pogo 3, as well as for the sailing boats of  Davy Beaudart et Simon Koster to make their presence felt amonst the racers.  Around Cap Finisterre, the wind will be be progressively more towards the north, and will potentially make for a long stretch with a following wind in the direction of the Canaries.

Sailors need to keep a check on their overflowing enthusiasm, in conditions where a boat sailing under spinnaker could rapidly change into the breaking of a spar, pole or mast, depending on good or bad luck.  In the light of this, on Friday, Denis Huges, the course director, reminded sailors  that ‘’… to win a race, you still have to cross the finishing line’’  . After the first stage, the race should still be mostly open, which is a good omen for the suspense of the second stage.

New features on the race map
After many years of  conducting the organisation of races, Yann Grolleau, the man behind the design of the Mini Transat îles de Guadeloupe race course, has continued to propose new features for the racers’ positions. Beyond the now quite standard possiblities of imposing  day/night limits, to film each contestant’s race from the start,  or of including the  champs de vent  , the new map will include a new device, already tried out in the last Barcelona World Race, which are  graphics to show the speed of each boat from one point to the next,  deviations from the route from one makrer to the next.  With this, i twill be possible to analyse the performace of each competitor and  to pore over the details of close finishes. With 72 competitors at the start, it’s safe to say that the tables of statistics will not lack information.

The last new introduction, tested for the first time here on the Mini Transat îles de Guadeloupe, will be a 5 day race for the 3 first placed competitors in the Eurovia Cegelec prototypes and Ocean Bio-Actif series boats classes. Another way to test the judgement of the sailors, without forgetting that armchair navigation in front of a screen is far easier than when you are on board a coconut shell , soaked by  squalls whilst playing a risky game in razor sharp waves.