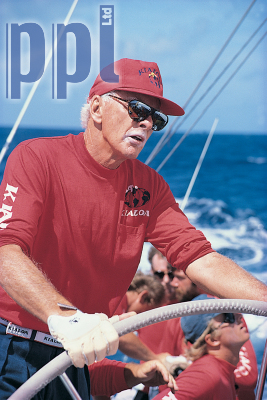 Jim Kilroy passed away this week while in hospice care. The real estate owner/developer was best known for his yachts all named Kialoa.

A full tribute will be posted shortly but here are the opening paragraphs of his Wikipedia entry:

In 1962 he and his KIALOA I crew won the San Diego-Acapulco race in record time.[1] Within two years, KIALOA II had been designed with even faster speeds in mind.[2]

KIALOA III, a maxi yacht, was the dominant sibling, winning the 1975 Sydney-Hobart race with a record time that stood for 21 years. A 1982 article described her legacy this way: “From her debut in 1975 until her retirement last year, Kialoa (a Hawaiian word for 'long, beautiful canoe') took part in 24 SORC (Southern Ocean Racing Conference) races. Time and again she was first across the line only to have some little 42-foot creep bring the wind from behind and beat her on corrected time. Still, Kialoa won four of her 24 SORC tests on corrected time — a remarkable showing, considering that in the same period only three other biggies out of a total of 19 won so much as one race without benefit of age allowance.