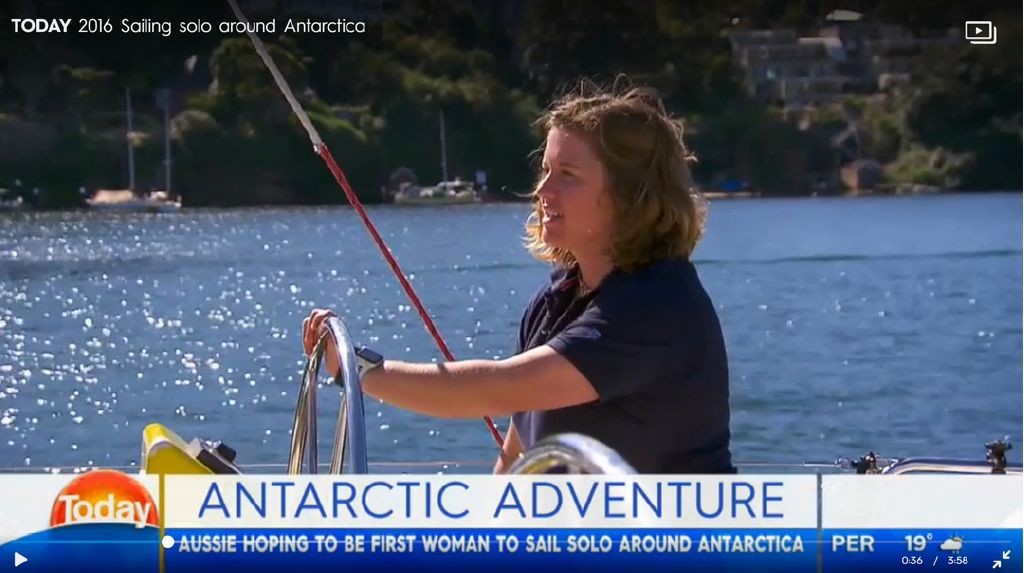 Screenshot from Lisa Blair's appearance on the Today Show.

When Australian sailor Lisa Blair announced that she was going to be the first woman to circumnavigate Antarctica single-handed, many people doubted the challenge would get off the ground. But here at www.mysailing.com.au we were very confident.

She has confirmed that the expedition will start in December – she has the boat and almost enough sponsorship to make it happen. But now she is asking for help from Sydney-based people to help prepare Climate Action Now for the big event.

Lisa began her offshore adventures in the Clipper Race and we got to know her through the blogs she wrote exclusively for us. We knew she was a special person when we read the report of her going up the mast in mountainous seas and gale-force winds to free a twisted spinnaker from the forestay, refusing to come down until the job was done despite severe bruising from being thrown against the mast.

In preparation for the Antarctic circumnavigation she entered the Solo Tasman race but the boat she was to sail was sold a month before the event. I lent her my 37ft Van de Stadt, which had been sitting unloved on a mooring for many months, and I was very impressed with how quickly and efficiently she brought it back up to Cat One standard. She then sailed across the Tasman to the start and back to Mooloolaba where she finished 10th in the race.

She then bought Climate Action Now after an appeal on this website for a loan was successful, and competed in the 2015 Rolex Sydney Hobart.

Now Lisa is asking for help to get her boat ready for the arduous journey.

“It has been a long road to get to here and I now have just enough to get me to the start. However I can't do this alone. I am asking for any volunteers that may be able to help. I have four weeks to get two months worth of work done so if anyone is in Sydney and can spare a few hours or days I would really appreciate it,” Lisa says.

“Key areas that I need help with are the electric installation of the B&G electronic gear and the conversion to eco-powered systems. Then there is plumbing, glass work, anti-fouling and general labour assistance and a trimmer to make up new covers and lee cloths, an aluminium welder, anyone who could make a fuel tank, glass, carbon and resin supplier, paint and new batteries… There is a lot to do.”

The boat has been hauled out at Woolwich dock to remove the rudder and keel to inspect the steering components and keel bolts and is now in the shed for the glass work.
“In the meantime there is much to do including the building of shelving on the boat for storage, installing a sound bilge pumping system, re-fitting the ballast system, converting two ballast tanks to fresh water, installing the wind, solar and fuel cell charging system, replacing the electronics with the new B&G system, installing two auto helms and many more jobs.”
Get Inspired
Legendary Australian adventurer, Dick Smith, is one person who has been inspired by Lisa and has offered financial assistance for the Antarctic trip.
I spent a bit of time with Lisa when we were refitting my boat for the Tasman race. If you are feeling disillusioned with the world right now I can recommend a few hours in her company. Her “can do” attitude is infectious and you will be amazed at how quickly you start viewing things with a positive slant.
So if you have boat-building skills, can provide materials or want to donate money to the challenge, give Lisa a call on 0431 302 088 or email her at lisa_blair@outlook.com. You may find you get even more out of it than she does!
– Roger McMillan, editor.