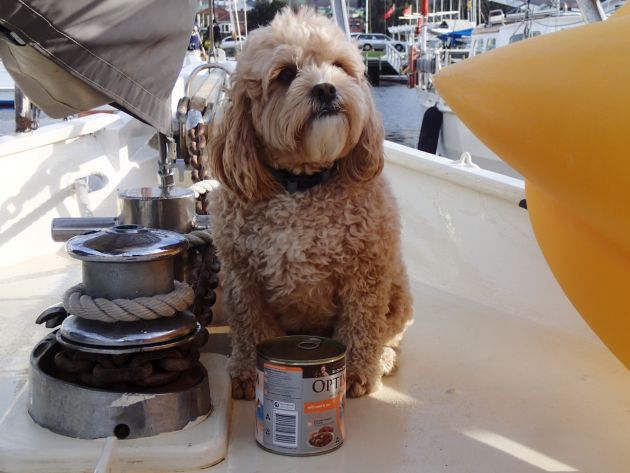 Sometimes all it takes is a can of dog food….

We’d recently replaced the electrics on Tubby (Golden Haze), including re-running cables and connections to the Muir anchor winch up in the fore peak. At the same time I decided to give the winch itself a birthday present. After years of delivering reliable service in exchange for ongoing serious floggings in various anchorages around the Australian coast, the winch had a trip down memory lane, or in this case Browns Road, Kingston where the Muir factory can be found.

The winch ended up with a new gear box and general clean up and in due course we bolted it back into place on Tubby. And just a little tip along the way, compliments of my engineering mate, Nick Fleming. Wrapping a layer of denzo tape around the winch to keep the salt at bay will give it years of extra life.

Of course when you rework anything you expect a couple of bumps along the way and as my sparky (electrician) Tim Rose said at the time, if we only have to chase down one or two wires that have been inadvertently dislodged while we’re going through the upgrade, we’re doing well. In this case I suspect the wires we bumped were the winch chain counter connections because the counter died a week or so later. And another note here; in spite of the counter failing the winch still operated perfectly well on the up and down buttons. Muirs really have built a product that can withstand all kinds of abuse, including dumb button pressers.

In any event, after a bit of research into the issue I decided to replace the sensor in the winch, a bit of preventative maintenance. The sensor itself is embedded in a swipe of sikaflex and must be located no more than 8mm from the magnet in the winch gypsy that it gets its signal from. When this little job was duly completed I turned to the wiring. The recommendation is to solder the wires together and if you’ve seen the forepeak in Tubby you would understand the complexities of this exercise. After turning myself into a pretzel to get the connections soldered and sealed, imagine my dismay to find the counter still not working.

After further consideration I figured out I may have attached the wrong wire and would have one last crack at the problem before heading home (via the supermarket for dog food; remember this is a story about dog food) and my first beer for the day. So, enter the pretzel again and the rewiring exercise, part two. Not to be outfoxed by making the same mistake twice I dodgied up the connections in the fore peak and checked the counter before getting out the soldering iron to make the fix permanent and yahoo!! It all worked.

So now just a simple bit of soldering and the job’s done. Of course nothing in a fore peak goes according to plan, especially when you are turned into a pretzel and half way through the soldering I must have touched the wrong thing because the winch started up!! S..T, I thought as I jumped, hitting my head and reflexively ripping apart wires I’d just soldered for the second time. Oh well, turn the circuit breaker off Dummy. Then once more into the forepeak rode the pretzel and I could almost taste the beer. And yep, you guessed it. All soldered up for the third time, heat shrunk and amalgamating tape because this little baby isn’t coming apart again for a long time and when I get back up on deck… the bloody thing didn’t work.

‘Enough she cried’ and I resolved to limp home, defeated for the day, to drown my sorrows (and the pain from the lump on my head) in the beer rather than celebrating a good job well done. Ten minutes later, my mind completely elsewhere, as I reached despondently for the can of dog food on the supermarket shelf and the thought of the still uncured sikaflex coupled with my unscheduled jump when the winch started up hit me right between the couple of neurons I have left.

I wonder if I’d jerked the sensor out of place when I’d reacted to the winch kicking in. With the sikaflex still uncured all it took was a quick call to Vic to explain why Charlie would have to wait a while for his dinner tonight and I headed back to Tubby. A poke with a little screw driver and the sensor slid back into place, the counter worked, the dog was fed and the beer (finally) tasted terrific!

Now plenty of guys would happily say a professional would have done the job quicker n slicker… But, you know, its hard to find a tradie when you are trying to snug up close under the lee of Deal Island in the middle of Bass Strait, in the middle of a gale, in the middle of the night, and doing it yourself means you know what to look for when things go wrong.

On another matter, the buzz around the back bar of the club cranked up a notch when I turned up in the Royal’s rubber ducky with a puncture in the starboard pontoon scored during my stint on the Sydney Hobart race patrol. Kenny Batt and I had been tug-boating the race finishers into the dock with the duck and while heading out from Elizabeth Street Pier we were confronted with an inbound cop in his RIB. Port to Port (or red to red as we call it) usually works for me but this bloke obviously decided differently. The end result was that he was lucky I wasn’t driving my big tug at the time and after bouncing off a lump of steel jutting out of the break water, we managed to get the red duck back into the club marina by going flat stick back to the Royals on one and a bit pontoons. It leaves you with no where to go when the law doesn’t follow the law.

Sadly, Tubby’s planned Queensland winter exploits have had to be put on hold this year but a Whitsunday charter cruise is being touted for August, by which time I’ll be well and truly ready to get out of the cold. Although I have to say the Tassie summer has been one out of the box and the water delightfully warm. We’ve had a couple of runs up the east coast, pulling the odd tuna from the deep around the Lanterns, just off the entrance to Fortescue Bay, compliments of Vic’s dad, John Jacob and his legendary tuna chasing techniques. And a couple of abs off the walls in Wineglass didn’t go astray either.

I managed a few boat races this year, with Wayne ‘Banga’ Bank-Smith on War Games, demonstrating ‘why he does it’ on the Thursday afternoon twilights. Getting me to trim the heads’l was very mean although I must admit I did go back for more. But now I remember why when asked what I usually do on a boat the stock answer is ‘either steer or navigate’.

And doing a couple of boat races with Roddy and Roger Jackman on the mighty Doctor Who brought back memories of countless ocean races on countless boats over the past forty odd years and what great times and great mates sailing in Hobart can produce.

See you out there.