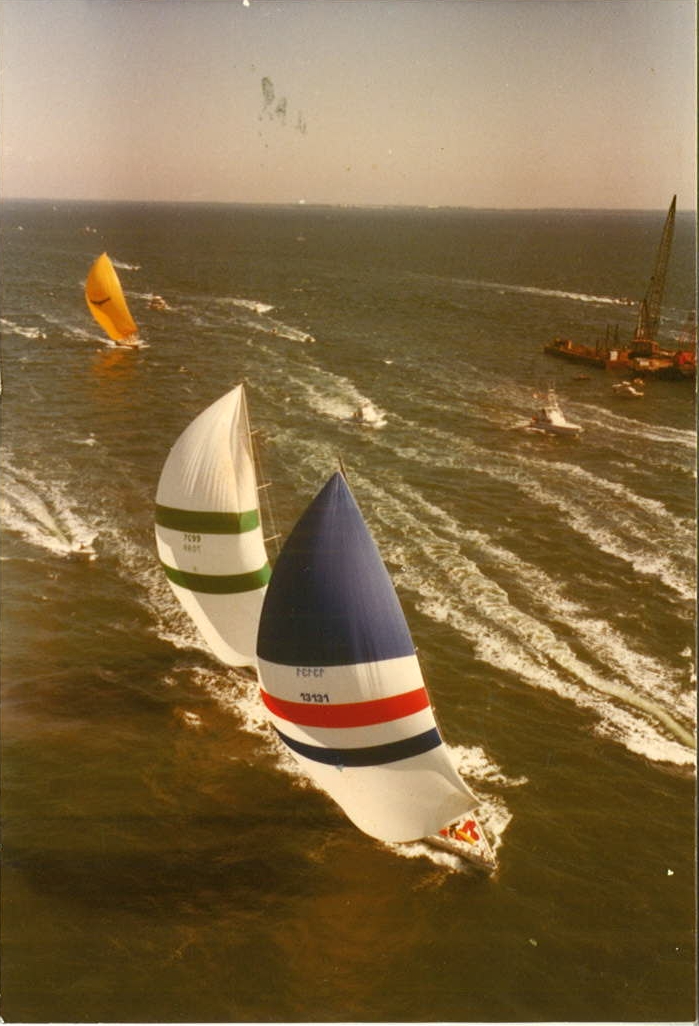 Us in front of course

By now many readers may well be aware of the death of Jim Kilroy. The US real estate magnate most known in Australia for his fleet of yachts named Kialoa.

Unfortunately I was overseas when I heard the news but, having arrived back in Australia, I thought I would share some of my memories of sailing with the affectionately (sometimes not) titled 'Old Man'. Bear with me as this all happened in the early 80s and some memories may be a bit shaky.

A mate and I had sailed with Lou Abrahams and Challenge II in the 1982 Sydney to Suva race and then delivered the yacht to Hawaii for the Pan Am Clipper Cup. Afterwards we had both taken the opportunity to leave the yacht and seek our fame and fortune in the big boy's league of global ocean racing. I scored a delivery of Apollo 5 to San Diego and my mate flew to San Francisco to grab a yacht for the Big Boat Series.

We met up again in San Fran and he told me he had heard that Kialoa IV was undergoing a massive interior refit and needed workers. On a whim we turned up and were immediately hired.

KIV was built in the old style. Jim's previous, the famous KIII, was a beautiful yacht and Jim wanted his latest to be the same. In that respect it was built full of teak veneer cabins. Sure, it had the latest in design concepts with Ron Holland's space frame; whereby instead of having numerous ring frames and ribs and stringers to keep the hull strong and stable, the framing, like a Formula 1 racing car, does all the work. The hull merely keeps the water out.

Not long afterwards however, the new Condor hit the water. A younger sister to KIV with minor hull design modifications, it had a stripped-out racing interior. You can still see the old girl sailing on the Whitsundays with Prosail.

So Jim, not being one to come second, wanted the entire interior of his brand new yacht to be altered in three months. Fortuitous for yours truly, no?

I had not been working there long before I met Jim. The boat was on the hard at Marina del Rey in Los Angeles and Jim and his second wife were living in the house just behind the 'Beverly Hillbillies'! They came bearing gifts for all the workers, which immediately endeared him to my heart.

But then he started checking our handiwork. On the port side of the main companionway was the full teak-veneered cabin of the navigator, which included a bunk and all the latest B&G gear.

Jim decided this should be totally ripped out and the nav station moved about seven metres into the aft cabin, so the navigator can converse directly with the helmsman through the aft companionway. The old nav cabin was to become the new head.

It was decided that I would perform this job. Me, an unemployed teacher who previously had only sailed a 47 footer. Move untold thousands of dollars of electronic equipment, rewire it and install in less than a couple of months.

I mentioned this to the captain of the time, Allan Prior, who basically reminded me of the Golden Rule: whosoever has the gold, makes the rules. This is a lesson I learned well sailing on Kialoa and am happy to report that I personally never broke it.

That was pretty much what sailing with Jim was like. Yes, he was tough and wanted things done, but he never shirked the bills or the treatment of his crew. When a person commands such respect, they have to earn it.

Let me now provide some insight as to what sailing on these 80s behemoths involved.

The first thing that hit you was the sheer size. Not just the hull, but everything. 7/16″ wire for genoa sheets spliced into rope for the massive winches all cross-linked to three grinding stations so six people could grind in the tacks.

Sails were made out of that brand new material Kevlar, so they were now lighter than the old Dacron: only 180 kilograms for the mainsails set on 30 metre masts. Strangeiy enough it all becomes relative after a while.

The maxi circuit was a two-year world trip organised by the owners, doing about five series a year, in some of the best sailing and high society spots in the world. A lot of the racing you see nowadays in Porto Cervo and such places was born out of this original circuit.

Commencing at the Southern 0cean Racing Conference in Florlda, then the Caribbean for Antigua Race Week; through the Panama Canal to the Hawaiian Pan-Am Clipper Cup, off to San Francisco Big Boat Series;  then, maybe Los Angeles California Cup before going back to Florida for the SORC the following year, including the flrst half of the Maxi World Cup in the Bahamas. Antlgua again, then Cowes Week and into the Mediterranean for two more series – usually at Palma, Spain and Sardinia, Italy, including the second half of the Maxi World Cup. Then? Why not back to Florida, or maybe Australia ….

Remember, these yachts were not shipped around the world, they were delivered by rangy, scrabbled-together yachties usually New Zealanders and Australians such as I. So, as well as those racing ports, you may end up visiting the Virgin Islands, Panama Canal, Acapulco, Bermuda, the Azores, Corsica, Gibraltar, the Canaries and many more.

These are not inexpensive campaigns, KIV had two shipping containers, one for sails and one for tools and equipment, travelling ahead to each port. I remember Prior telling me one time that in those days KIV cost US$3 million per year just to run the yacht, let alone all the modifications and new gear we would add during the course of a year. In the time I sailed on Kialoa we carried out the total interior refit, which resulted in a 680kg ballast change; a taller, four-spreader rig to improve light to medium wind performance; a new keel lo improve heavy air/rough sea stability; and replaced the aft cockpit along with numerous other constant deck modifications.

Then came the racing. This was not the long windward/leewards of today but round the triangle buoy racing. In one memorable tacking duel, which thankfully we got to watch, Windward Passage and Nirvana went through a 1.5 mile upwind leg tacking duel, including 22 tacks.

Mind you, we had our own share of tough work. During Antigua Race Week 1983, Kialoa, Nirvana and Condor were involved in a tacking duel while raging through a packed fleet of smaller yachts off a lee-shore. Perfect opportunlty for Murphy's Law.

Kialoa's centre grinder pedestal drive-chain exploded, leaving only one grinding station per winch, i.e. only two people could grind on the headsail instead of the usual six. After each tack, the two grinders would fall backwards to regain their breath and another two fresh crewmembers would take their place.

Noting our dilemma, the other maxis exploited the situation and put us into a tacking duel while the paid-hands attempted repairs down below. The paid-hands must be able to repair everything while racing.

During the Miami-Nassau race we had another tacking duel at night, off a rocky lee-shore in thirty knots of breeze trying to cross the notorious Gulf Stream. With the No.3 Kevlar up, the call goes for the No.4.

When foredeck crew go forward it is usual for the helmsman to bear down slightly to keep boat speed up from the increased bow-down trim. This, of course, increases the waves coming over the bow.

Four crew holding onto the No.4 kept trying to run forward, only to be washed back to the shrouds each tlme. With frozen fingers, the luff was finally fed and the sail winched up. Pulling down those old Kevlar sails was always hard, the cold and the waves did not help. After it was finally bagged and packed down below, with the foredeck crew sweating and soaked back on the rail, the afterguard took delight in complaining that it all took an hour.

An interesting point, however, in all that crazy sailing, we never had a major accident. Sure there were incidents but no one was seriously injured. More damage usually occurred onshore at the award's nights.

Some may recall the nasty incident where Nirvana's first mate suffered a terrible battering in Sydney before the 1983 Sydney to Hobart but I cannot recall any other major accident. This is an impressive statistic given the massive forces involved. When something goes wrong on a yacht it goes wrong in a big way; this thought breeds good seamanship.

Personally, I have seen the maxis lose masts; a halyard turning block explode; numerous sail disintegrations; even a colllsion between two rnaxis in 12 knot surfing conditions with a crew playing human fender. All without serious injury.

Sailing with Jim and his brand of professionalism showed me a lot. Having buckets of money is one thing but that was never really his bag. You could see the joy on his face in making his boat win, the money was just the vehicle to make sure his crew could never complain that something was not right. Provide the opportunity for everyone to do their best.

We partied hard but we never took the opportunity for granted when on the water and I am proud to say we helped Jim gain many regatta wins and a Maxi World Cup trophy to top it off.

Back in the 80s Jim Kilroy had already earned the old naval nickname of 'The old man'. The fact he continued to enjoy his sailing for another thirty years aboard his beloved KIII, speaks volumes about the way he approached life and imparted that on all who knew him.

Remember the time off Florida Keys chasing Condor when we hit that reef ……..

The photos in the gallery are mine (except where acknowledged) each with a personal significance related to the Old Man. Click on the gallery to read my captions.