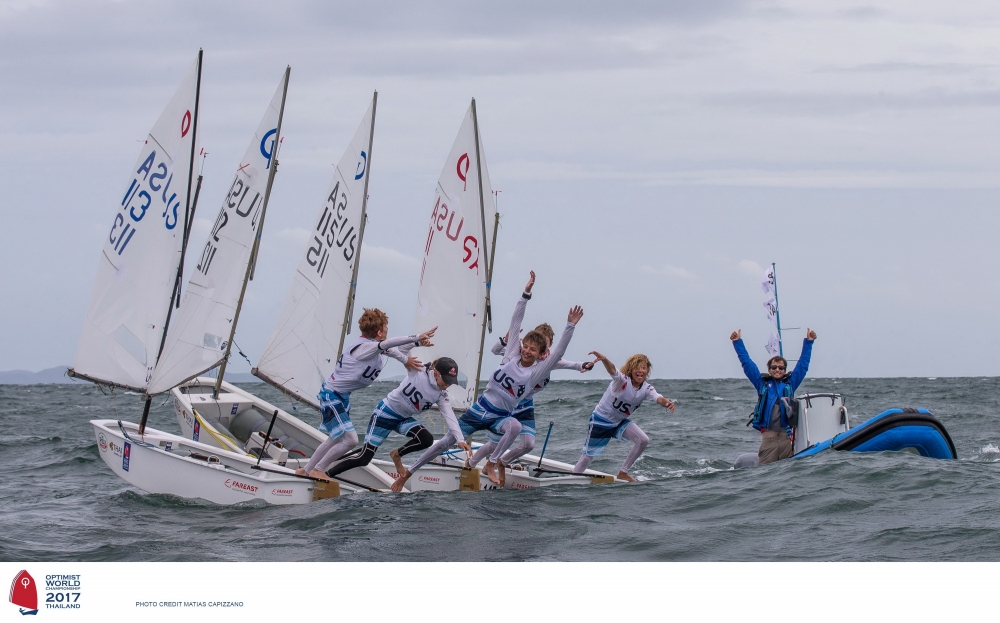 The US Optimist team celebrates its win. Photo Matthias Capizzano.

Pattaya, Thailand – Team USA beat Team China in a dramatic, hard-won, winner-takes-all ‘Sail Off’ in the team racing portion of the Optimist World Championship 2017, retaining its hold on the IODA Challenge Cup team racing trophy for the second year in a row..

In high winds of 13-18 knots, huge swell, and choppy seas, the Americans set off in the morning alongside 15 other teams, each determined to do their best on the final day of the team racing championship.

“It was going to be challenging. All the teams are excellent. We knew that going into the day,” said Justin Callahan, Team USA’s sailor spokesman and the only remaining member of last year’s winning team.

The day opened with a series of flights which ensured each of the top 16 teams had a chance to race twice before being eliminated if they lost twice. Team USA skillfully bested Ireland, Germany, Thailand, and Singapore in turn to earn the first assured place in the final Sail Off.

In contrast, the Chinese had to duel with six teams to secure their spot in the finals. Ironically, in their second race, they were beaten by the Malaysians, but, in the showdown for the second seat in the Sail Off, they found themselves up against Team Malaysia again, this time besting them and sending them to shore with bronze.

The final Sail Off was a best-of-three race series, the first race won by Team USA, the second by Team China. This made the third race a ‘must win’. As the race committee, described it, the deciding race was a “great race”, the winner unclear until the very end.

As Justin described it, “We were first, second and third at Mark 3 in the final race, but then things got a little messy”. After an incident with a Chinese sailor who pushed the limits of what is allowed in team racing, Justin found himself in sixth position. He managed to gain ground, and, as he put it “somehow, right at the finish, we pinned them back and finished first, second and third. It was a very close finish.”

On the water observers described a lot of shouting by sailors and whistle blowing by umpires as rules were broken and sailors called each other out, all part of the drama of team racing, in which competitors may push or hold their opponents back in what might otherwise be considered unsportsmanlike behavior.

Team USA had no complaints about the high intensity of the action on the water, however. As Justin said, “The umpiring was amazing. They were calling all the right calls. We got flags when we knew should have got flags.”

Asked what the team’s secret to success was, he did not hesitate. “Chemistry. Synergy on the team,” he said.

“Their devotion to excellence in sailing,” added Paul Callahan, country representative, president of the US Optimist Dinghy Association, a two time Paralympian, and, most importantly today, proud father to Justin and his twin brother Mitchell, who both qualified for Team USA on their own merits.

Other members of the team – Stephan Baker, Liam O’Keefe, and Charlotte Leigh – were beaming ear to ear at the end of the day as well.

The team’s only issue now is how to get the large IODA Challenge Cup back to the USA, the box they carried it over in damaged. We trust event organizers will be able to find a replacement.

On Tuesday, the individual world championships series continues with fleets split into four based on their rankings after six earlier this week. The Americans can expect to do battle with the Chinese again in the coming days. Four members of Team USA and three of Team China are in the gold fleet.

The 2017 Optimist World Championship, which has a record-breaking 281 sailors from 62 countries participating, is organized by the Royal Varuna Yacht Club with the endorsement of the Yacht Racing Association of Thailand and the Junior Sailing Squadron of Thailand under the International Optimist Dinghy Association. It is supported by strategic partners including Pattaya City, the Sports Authority of Thailand and the Thailand Convention and Exhibition Bureau. Co-sponsors include The Pizza Company, Apollo (Thailand), Thai Airways, and True Corporation.