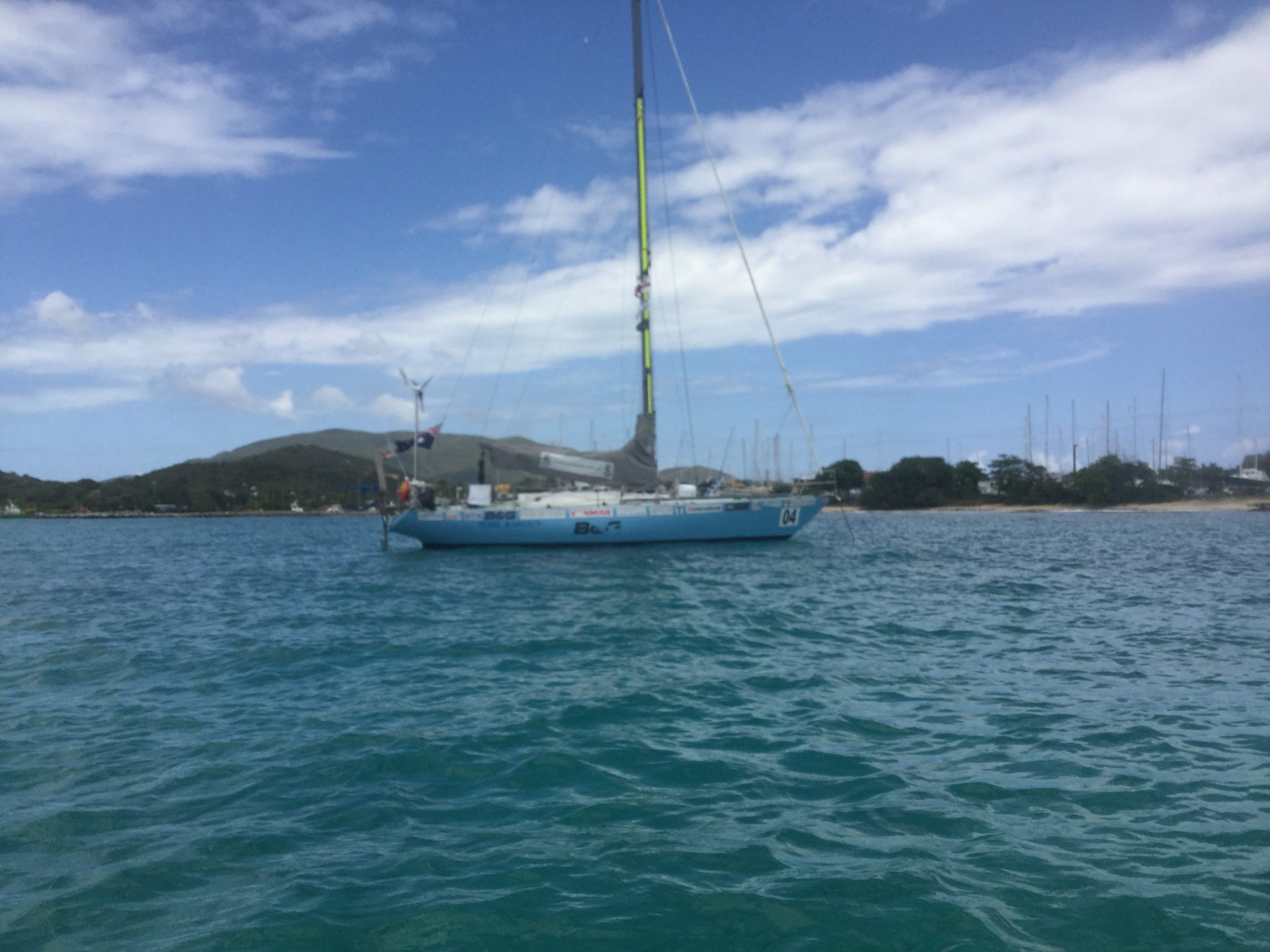 Jon Sanders is heading west on his 10th circumnavigation of theglobe. He ponders on all things nautical and delivers some gems.

It is said and one believes, more material (not to forget etc. etc.) goes into these stock production cruising yachts to stand the ocean rigours. UK built.

The Swan Yachts Finland has a similar reputation. Appear to emphasise Ocean Racing ability in their design. Perhaps their designers do not consult mother enough. No more.

All that aside, I am a Swan fan.

Anyway parked at Taina Marina, and at the upgraded Marina Down Town Papeete are lots of Oysters.

Not the sort you eat.

It is the Oyster Round the World Rally.

Senator Campbell and Dr Robin Morritt. Have something in common. (The latter writes notes for this blog).

They have both read and then followed the voyage of Bernard Moitessier.

Whilst I was sailing thru the Tuamotu Archipelago I got an SMS, via the iridium, from Robin. – Late at night – fully awake because I didn't want to prang the fringing reefs. (It is not the done thing to damage the coral).

“You're in Moitessier Territory”.

Spent much of his life on AHE Atoll (on all the charts it says AHE. But the Polynesians call it Tamata).

Way back in the late 1960s (1968) the British Sunday Times conducted the Golden Globe Race. The winner would be the first to circumnavigate the world single handed non stop.

Donald Crowhurst committed suicide – after giving a series of false positions on the DSB Radio.

Of those 9, two of them had the most experience at sailing their yachts beforehand.

They both got away sooner.

Bernard probably would have won. Having cleared Cape Horn and on his way back up the Atlantic – did a U turn, “what the heck” – “I don't want to return to the French Rat Race” – or something similar – and headed back to the Southern Oceans, sailing south of South Africa yet again, onwards to paradise. French Polynesia.

At the time the longest continuous voyage in the history of the planet.

To become (& still is) a legend of the South Seas.

All the above I just scribbled in pencil. Before I put it into the iPad I will wander down to the Marina Office and checkout. Expensive. Just as well brother Colin put some money into my account – or I would be staying put. (Clink).

I will then catch a bus to Papeete and get my clearance for Noumea New Caledonia from the Port Authority, then visit the Douane and the immigration police. All this has to be done you know.

The Tuamotu Archipelago has, at its southern extremity, the Mururoa Atoll and the Fangataufa Atoll. These are located approximately 1,250 km (675 Nm) southeast of Papeete where Jon and PBII are taking some time-out from the high seas. Both atolls were subjected to extensive nuclear testing (approximately 200 N-bombs detonated) by France between 1966 and 1996.

As is the case for Bikini Atoll, the Mururoa and the Fangataufa Atolls have been the subject of detailed geological scrutiny, including deep drilling. An assortment of calcium carbonate rocks and detritus down to between approximately 130m and 500m is present. Again, volcanic sea-mount basement somewhere below that depth. In the case of the Mururoa Atoll, volcanic rocks were encountered in the drill hole below carbonate rocks.

What about impacting geological processes and time on these atolls? Include multiple periods of global cooling (advancing ice packs) and periods of global warming (retreating ice packs), each with associated sea-level variation. Include significant tectonic changes to the oceanic crust as it moves away from the mid-ocean ridge. In respect to the former, some relatively recent carbonate rock units, now below current sea level, have karst (cave) topographies – evidence that rocks currently below sea level were previously above sea level.

So, how to explain the occurrence of such great thicknesses of reef-building coral given that these corals and associated organisms only grow in the top 30m of the water column? Overwhelmingly, massive subsidence of the volcanic and carbonate-rich sedimentary pile, in conjunction with down-flexing of the oceanic plate, has driven the growth of reef-building corals around atolls.

The simple and obvious hypothesis, to some at least, is that the reef-forming corals established themselves on oceanic volcanoes that were either emergent or at least having their top within the top 30 meters of the water column. The corals and associated marine life would have flourished once the very active phase of volcanism diminished or ended. The volcanic activity at this time would have produced a lot of very broken, porous volcanic rocks on very unstable slopes constantly battered by the ocean. Once the reef-building corals establish then a sequence of events follow which result in the atolls and motu’s we see today. Keys to this sequence are: an emergent (or near so) volcanic pile; growth of coral and associated marine species; the subsidence of that volcanic pile and the rapid growth of reef-building corals – within the top 30 meters of the water column to remain in sunlight.

Charles Darwin, perhaps with some persuasion from the 1830 treatise “The Principles of Geology” by Charles Lyell, came to the following conclusion in respect to atolls during the 1830’s voyage of the Beagle:

“…there is but one alternative; namely the prolonged subsidence of the foundations on which the atolls were primarily based, together with the upward growth of the reef-constructing corals. On this view every difficulty vanishes; fringing reefs are thus converted into barrier reefs; and barrier reefs, when encircling islands, are thus converted into atolls, the instant the last pinnacle of land sinks beneath the surface of the ocean.

Thus the ordinary forms and certain peculiarities in the structure of atolls and barrier-reefs can be explained;—namely, the wall-like structure on their inner sides—the bason or ring-like shape both of the marginal and central reefs in the Maldiva atolls—the union of some atolls as if by a ribbon—the apparent disseverment of others—and the occurrence, in atolls as well as in barrier-reefs, of portions of reef, and of the whole of some reefs, in a dead and submerged state, but retaining the outline of living reefs. Thus can be explained the existence of breaches through barrier-reefs in front of valleys, though separated from them by a wide space of deep water; thus, also, the ordinary outline of groups of atolls, and the relative forms of the separate atolls one to another; thus can be explained the proximity of the two kinds of reefs formed during subsidence, and their separation from the spaces where fringing-reefs abound. On searching for other evidence of the movements supposed by our theory, we find marks of change in atolls and in barrier-reefs, and of subterranean disturbances under them; but from the nature of things, it is scarcely possible to detect any direct proofs of subsidence, although some appearances are strongly in favour of it. On the fringed coasts, however, the presence of upraised marine bodies of a recent epoch, plainly show, that these coasts, instead of having remained stationary, which is all that can be directly inferred from our theory, have generally been elevated.” (Darwin 1842, p147)

Note: Discussion of “barrier reefs” would include the “Great Barrier Reef” off eastern Australia.

Sound reasoning by Darwin from what he observed during the voyage of the Beagle. He did not have access to drill core and geophysical data to support his hypotheses and conclusions. His report findings remain current today and are worth a read…

One of the principle implications for the massive thicknesses of these oceanic carbonates is the extraordinary subsidence associated with atoll formation. Another is to do with the hysteria over “global warming / climate change” and “sea level rise” inundating some of these inhabited atolls and motu’s. Maybe, just maybe, naturalist Darwin was onto something of importance in the 1830’s when he elucidated the driving forces for atoll formation. Maybe we are being fed a lemon two centuries later? Maybe removing fringing / barrier reef material for constructing airstrips, roads and buildings, and drawing-down the fresh-water table from the extremely porous and unstable substrate could impact the stability of current, emergent land surfaces?

There is another land-form type that is subject to natural subsidence, through compaction of unconsolidated sediments and to renewal of its elevation, this time by deposition of additional sediments. A beautiful balance in nature. Due to rich soils and fresh water these land-form types can support large human populations. I refer to river deltas and their braided river channels.

The Rhine River Delta – The Netherlands. Subsidence of the delta exquisitely managed by the Dutch.

The Mississippi Delta – USA. Think New Orleans. Managed by the United States Army Corps of Engineers (USACE). In the news because of “sea level rise”?

The Ganges-Brahmaputra Delta – Bangladesh and the Indian state of West Bengal. In the news because of “sea level rise”?

If you intend forcing the braided river channels of a large delta system to be fixed and not “fan” across the delta over time, as nature intended, then be prepared to manage the consequences of subsidence which leads to areas dropping below sea level. What then will happen if storm or hurricane-force winds push large volumes of water on-shore? However, if you populate a river delta without trying to control the braided river flow then be prepared to move – often. A conundrum for all involved.

Think of an area at risk of “inundation” due to “climate change” and “sea level rise” and you will likely be identifying a populated atoll or river delta subjected to natural subsidence and subsidence brought on by man’s intervention.

Jon and PBII are currently moored off an emergent South Pacific volcanic island with fringing coral reef – beautiful. Given (geological) time Jon would likely return to an atoll or maybe even a motu. Provided we haven't entered another period of global cooling… In that event geological and climatic processes may leave Jon sailing over nothing more than a seamount – visible only to a powerful onboard SONAR.

STRUCTURE AND DISTRIBUTION OF CORAL REEFS.

Being the first part of the geology of the voyage of the Beagle, under the command of Capt. Fitzroy, R.N. during the years 1832 to 1836, by

Published with the Approval of the Lords Commissioners of Her Majesty's Treasury.