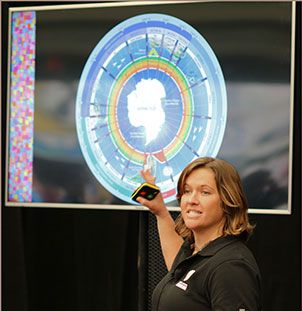 The Sydney International Boat Show celebrates its 50th year in 2017. The show will be hosting a number of fantastic presenters who exemplify the adventurous spirit. In particular, Michelle Lee and Lisa Blair will be on stage to share their incredible stories.

Michelle Lee is a rower who has already accomplished an amazing feat. After only taking up rowing in September, she has recently completed the Million Metre Challenge, becoming the fastest woman to row one million metres. She has smashed the previous record by completing the row in five days, 21 hours, 34 minutes to set a new world record.

She aims to compete in the Talisker Whisky Atlantic Challenge, widely regarded as the toughest rowing challenge in the world. The challenge is a 5,000 km row across the Atlantic, from La Gomera, Spain to Antigua in the Caribbean, starting in December. If successful Michelle will be the first Australian female to row solo across the Atlantic Ocean, and aims to be the fastest woman to do it.

Michelle, and her trainer and mentor Andrew Abraham, will be at the Boat Show to share their challenges and successes. Abraham is the current male world record holder of the Million Metre row and winner of the solo Atlantic Challenge in 2013. See her boat, try a row machine and support her amazing journey.

Lisa Blair is an experienced sailor who took on the challenge to circumnavigate Antarctica, solo and unassisted. It has been a gruelling sail with many challenges along the way. Lisa was de-masted due to rigging failure and declared a Pan Pan, pulling into Cape Town for 8 weeks to undergo repairs.

Lisa is currently on the home stretch after restarting her sailing attempt, crossing all tracks below 45 South. She is expected to arrive in Albany, Western Australia, on the 23rd of July, having circumnavigated Antarctica.

On her arrival in Albany, her next port of call will be the Sydney International Boat Show. Lisa will be at the event to present her thrilling story.

Both these guests will be at the show throughout the week, and their remarkable achievements of endurance are sure to inspire visitors at the Boat Show.