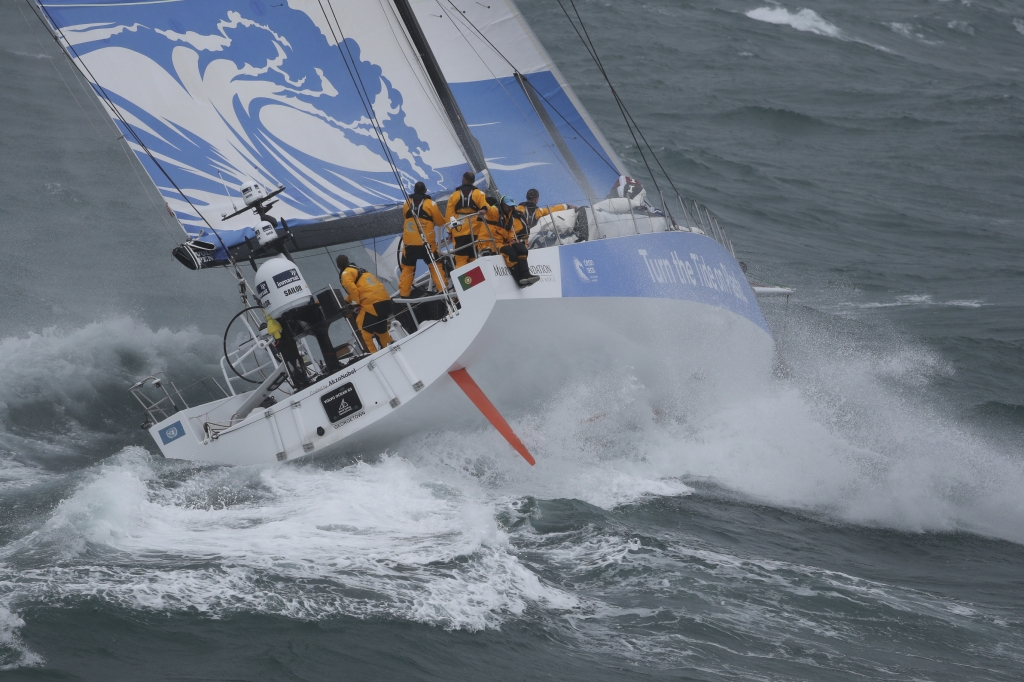 The second stage of Leg Zero qualifying for the VOR fleet is the Rolex Fastnet Race, starting on Sunday (6 August), and it will present a very different challenge to the Volvo Ocean Race fleet – as well as an early chance for the chasing pack to show they can match early pacesetters MAPFRE.

Xabi Fernández and his Spanish team found record-breaking form in winds of up to 35 knots to take the first of four Leg Zero races on Wednesday, a blast around the Isle of Wight in the Sevenstar Triple Crown series at Lendy Cowes Week.

While MAPFRE took the honours, the racing was incredibly close among the entire fleet and there were plenty of positives for all the skippers to take from the first battle of the Volvo Ocean 65s in the official build-up to the race itself, which starts 22 October from Alicante.

But while that first test came in true Volvo Ocean Race conditions – with the boats blazing through a tormented sea, records smashed and salty smiles all round – the famous Rolex Fastnet Race? Not so much!

This year’s 605 nautical mile Fastnet is going to be a long upwind slog all the way from the start line off Cowes, Isle of Wight, to the turn at the Fastnet Rock at the south east point of Ireland. The last class to start at 1140 UTC, and one of the fastest, the Volvo Ocean Race fleet will quickly find themselves amongst the smaller boats ahead as the entire 390-boat fleet tacks up the western Solent in a classic Fastnet start.

The excitement could soon turn to frustration if the light conditions don’t allow the Volvo Ocean 65 fleet to make it past the first major headland, the Portland Bill, before the tide turns against them. With a strong eastwards rush of the tide against them by the coast, and lighter winds below them to the south, the boats that just blitzed the Isle of Wight record will be crawling.

“This race is fraught with hazards,” said Dee Caffari, skipper of Turn the Tide on Plastic. “Right from the start line as you leave off the Royal Yacht Squadron line through the Solent you’ve got shallows and tide to contend with and several tidal gates along the way which are either going to make or break your race… But it’s not my first Rolex Fastnet so I’m comfortable that I know where I’m going and what I’m doing.”

No respite waits at Land’s End as they’ll pass through a cold front that will add rain to the insult of upwind sailing. A new high pressure will establish itself on Monday in the middle of the Atlantic that will feed the fleet steady north-westerly wind to cross the Celtic Sea. More upwind!

The stable conditions will allow the crews to soak up a beautiful rounding off the famous rock – which should make for some nice photos in the early hours of Tuesday, if the sun is up by then – before a nice run back to Plymouth in 15-20 knots.

For David Witt, skipper of Team Sun Hung Kai/Scallywag, it’s a good opportunity to test the wisdom of his decision to go with an all-male crew of seven instead of taking advantage of a rule that gives teams the option of adding up to two women to the team, or taking a fully mixed five male-five female crew.

Witt said: “We’ve got a bit of a strategy of having the least amount of people on board and the reason for that is for conditions like the Fastnet, especially coming back from the Rock, when it’ll be VMG running 8-12 which is sort of what the majority of this Volvo is.

“We might tick a box and say we’re right, or we might say ‘hold on’ and change our whole strategy.”

The crews that are still new to their boats will be thankful for the opportunity to knock out some gybing practice before stages three and four of Leg Zero bring them into stronger downwind sailing again down the coast of Portugal.

Charles Caudrelier, Dongfeng Race Team, said: “It’s very good to be here because before the Volvo we couldn’t sail against the other ones, so we trained outside and we have no reference, only the numbers, so it’s good to race against the other ones and see how it goes and if we did a good job so it’s very important for everybody.”