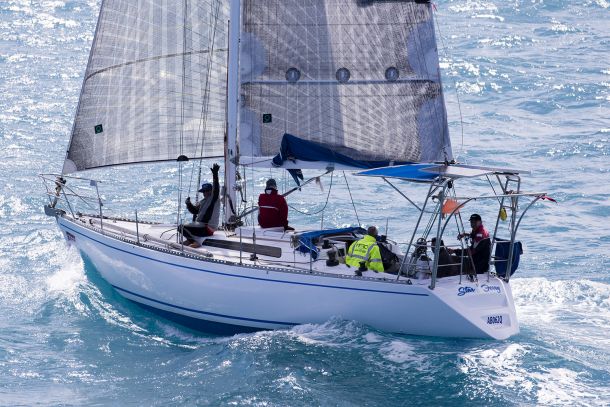 A day is a long time in politics, but at Hamilton Island Race Week a mere few hours is all that’s required to turn from hero to zero – or vice versa.

Day four’s testing conditions yesterday, Thursday August 20, 2015, reversed the fortunes of more than a few yachts holding podium positions before the start gun fired, not least in the Racer Cruising and Non-Spinnaker divisions.

“It was like a washing machine out there,” said Star Ferry’s skipper John Brand, referring to the short steep wave chop kicked up by the wind against tide conditions in the eastern start area. Star Ferry was holding second position in the Non-Spinnaker division before posting a shocker. “We didn’t have any dramas really but we still ended up finishing 18th out of 25,” said John.

Star Ferry has seen plenty of ups and downs in her long career, taking part in Sydney Hobart yacht races in the 1980s and being rescued as a wreck and restored by John. “She even ended up in the trees after a cyclone one year,” said the Bundaberg Sailing Club member.

The leading yacht in the same division prior to race four, Geoff Adam’s Beneteau 36.7 True Colours, fared no better, taking a 23rd place. “After that result the handicappers better be very sympathetic to us,” said Geoff, who hails from Brighton Yacht Club in Victoria and describes his regular club racing crew as ‘the Mob from Melbourne’. “Three of our team own their own boats, which is normally a recipe for disaster. I think the only reason they’ve toed the line a bit this week is that I’m bigger than them both!” said Geoff with a laugh.

In the Racer Cruiser division Tony Coleman’s J133 Euphoria finished one spot short of a podium place on day four of racing, but still holds the overall lead. “We’re probably staying a bit below the radar as there are two boats in our division that have had two wins each (Hartbreaker and WhaleWatchingSydney),” said Tony.

“The start was interesting this morning, I think there was as much movement up and down as there was forward!” he added. Euphoria’s crew combines couples and friends Tony sails with regularly out of the Royal Sydney Yacht Squadron. “We’ve got a good gender balance on our boat with six women and four men. I’ve known them a long time; I even went to school with two of them.”

Ian Ford, who raced a Soling in the 1976 Olympics and was Etchells World Champion in 1980, has borrowed WhaleWatchingSydney from a mate in Airlie for Race Week, which follows a pattern he describes as ‘beg, borrow or steal’. “I don’t own a boat, I’m a FIFO (Fly In Fly Out) skipper; that’s what they made aeroplanes for, to go sailing!” said Ian, who also had a shocker today, finishing 11th.

Ian is clearly a ‘glass half full advocate’. “We always do well, it’s just that other people get in our way!” he said with a chuckle. But even before his boat had left the dock yesterday Ian spoke for many who lead halfway through a regatta, “Unfortunately there are seven races in this regatta and we’ve only completed three. So it’s not over til the fat lady sings and there’s a lot more sailing to do before the numbers come up.”