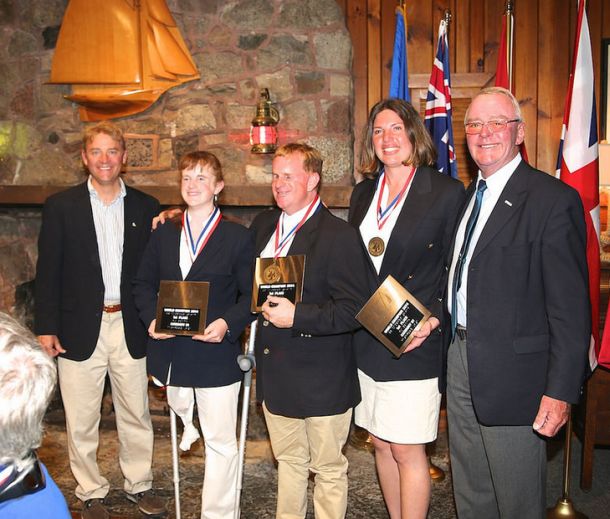 Kylie Forth and the team with their gold medals.

Amid all the public outcry over the decision to drop sailing from the Tokyo Paralympics, one brave woman is quietly getting on with life. She has an ambitious goal, but based on past performance it's one she will achieve. Kylie Forth wants to set up an Australian Blind Sailing Association so more blind people around the country can enjoy the pleasures of the wind on their face and the tiller in their hand.

Completely blind since she was three years old, Kylie won the 2014 World Championship of Blind Sailing and is currently sailing across the Atlantic on the tall ship Lord Nelson.

I didn't even know Australia had a blind sailing team until I got two emails on the same day. One was from Kylie who “reads” our bi-weekly enewsletters and, apologetically, asked if we could give the team some coverage because they get no funding from the AST or anyone else. The other was a regular “update” from a very good friend of mine, who is currently a watch captain on the Lord Nelson. Let's hear from Stretch first, remembering he is not a journalist, just a bloke updating his old rugby mates on his tall ship activities:

I've met some wonderful folks on all these trips and have shared many laughs with them. By the same token I've been humbled to tears on more than one occasion. One such time was just last week when I met Kylie.

Kylie Forth is 28 from Perth, not only is she blind but in fact has plastic eyes as she lost her own to cancer at age three!. As if that was not bad enough, she has just had more cancer and lost her leg to it as well!

She is the captain of the Australian blind women's sailing team, and has just won a gold medal at the world champs! She has the heart of a lion, a beautiful personality, an amazing sense of the funny ha ha.

So picture, if you will, the nerve she has when it came time to climb the mast. The first platform is ten metres high! She asked if she could climb with the group and was told “no” due to her condition, and that at a later date she could go up with the group needing assistance. Although not altogether happy , she said nothing and waited her turn.

The Bosun, Dave (good bastard), agreed to take her up on her own the next time he had an hour spare which turned out to be two days later. Kylie, complete with climbing harness, took off with Dave guiding her as to where to place her feet and hands etc. To the joy of the crowd on deck shouting encouragement she reached the platform. With a big yahoo from her and a quick consult with Dave she came back to the edge of the platform and proceeded to climb to the very top of the mast – 38 metres!

With the loudest yell in the world she tossed her hands in the air and gave us mere mortals a bloody great wave. A very moving moment for us as we watched her reach the top. She came back to the deck to the applause and admiration of us all!

(Nickname redacted), keep a look out for her, I told her to look you up. She reads your articles and a page write up would go a long way to helping her finance the next trip to the worlds.

Here's the report on the World Championships:

Five countries were represented across two divisions in the championship: Australia, Canada, Italy, the UK and USA. Category 1 consisted of totally blind sailors, while Category 2 had totally blind Skippers with vision impaired crew. The course was laid out by audible buoys, each with a unique signal, and each boat had an acoustic tack indicator to identify whether it was on port or starboard tack. While there were no sighted sailors or observers on board, each boat carried a radio and was in direct communication with the umpires.

Despite the first day of racing being cancelled due to a combination of fog, strong wind and large waves on Lake Michigan, the regatta organisers were able to complete all scheduled races.

The Australian team won seven out of their nine races in the three preliminary round robins, allowing them a free pass into the finals as top-ranked team in their division. The results of the semi-finals gave them the opportunity to challenge the 2012 world champion, Luigi Bertanza (Italy), for the trophy.

A collision in the pre-start of the first match of the finals put the Australians on the back foot, and they were unable to retake the lead in that race. However, by sailing cleanly and conservatively they had three straight wins in the next matches, thus allowing them to take the title.

Just after the championships, the team’s coach, Justin Kelleher, was named WADSA (WA Disabled Sports Association) Coach of the Year. The team was also a Finalist in the 2014 Yachting Australia Sailor of the Year with a Disability Award.

As well as preparing for the 2015 IFDS World Blind Fleet-Racing Championships later this year, they are working to establish a national blind sailing organisation to promote and regulate blind sailing in Australia. There are currently only a handful of sailors with vision impairments across the country, with no opportunity for local or national competition, so the proposed national organisation will encourage more people to take up the sport.

Anyone who would like to help Kylie co-ordinate blind sailing activities in Australia, or would like to contribute financially to the team's fleet racing championship activities, please contact me at rogermcmillan@yaffa.com.au and I will put you in touch.

PS: I have another friend, a blind man named Graham Corry who is also from Perth. Graham is a motivational speaker and a very funny man. He used to tell a joke about a blind bloke playing backyard cricket where “over the fence is out”. Now someone's made a YouTube video of the joke. Here it is – remember it's a joke and the cat was not really hurt!