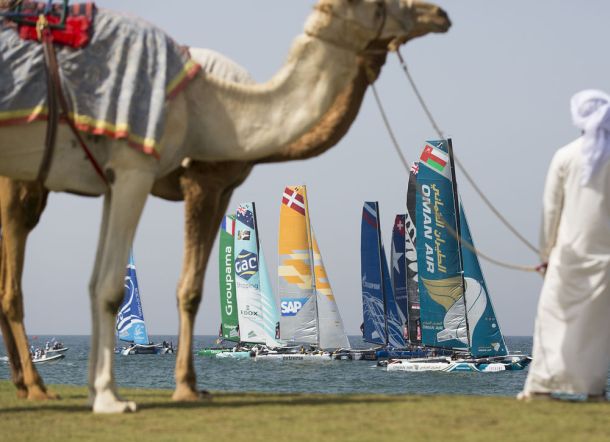 Oman is the most successful nation in the nine-year history of the Extreme Sailing Series and with less than a week to go before Act 2 of the 2015 global tour in Muscat, 11 – 14 March, the spotlight is inevitably on the home teams The Wave, Muscat and Oman Air. But is there really such a thing as home advantage? History would suggest there is. The Oman Sail teams have set the blueprint on this racecourse in previous years, winning on their home turf over the last three seasons, and with both teams looking to improve on their Act 1 performances, few would bet against them.

A regular on the Series since 2009, The Wave Muscat, led by British Olympian Leigh McMillan, have built themselves into a powerhouse in the world of Extreme 40 Stadium Racing. Joined on board by two-time British Olympic gold medallist Sarah Ayton as tactician, Extreme 40 heavy weights Ed Smyth and Pete Greenhalgh, as well as Omani national Nasser Al Mashari, the team has thrived in recent years on their home turf, winning the Muscat Act in both 2013 and 2014. In 2012 the Act honours went to fellow Omani syndicate Oman Air.

However, a shake up in the leaderboard after Act 1 Singapore sees defending Champions The Wave, Muscat on the back foot. Red Bull Sailing Team, spearheaded by Austrian double Olympic gold medal-winning duo Roman Hagara and Hans Peter Steinacher, took the Singapore event win followed by Danish team SAP Extreme Sailing Team who, returning for their fourth year on the circuit, turned their experience and potential into results.

Only just making it on to the podium in Act 1 Singapore, McMillan’s The Wave, Muscat are in third position going into Act 2 but history indicates that may be about to change.

“The last two years we have raced in two different venues in Muscat,” explains McMillan. “In 2013 at The Wave complex tucked inside the marina was much more close quarters and with it some very challenging situations. Last year we were at the new venue next to the golf course, it’s much more open water but potentially even trickier lighter winds. I’m not sure about home advantage but experience will give us an edge.“

On their performance in Act 1 McMillan adds, “Two teams got the better of us in Singapore, (Red Bull and SAP Extreme Sailing Team) but we hope to turn that in our favor in Oman and use it to stoke the fire. It’s not going to be easy, the guys just showed how hard it’s going to be to win this season.”

Another team brimming with potential this season, Oman Air, has a new crew onboard headed up by two-time British Olympian Stevie Morrison. Currently sitting fifth overall, Morrison is joined by fellow Team GB sailors Ed Powys and Nic Asher, and bringing some valuable Extreme 40 experience to the syndicate Australian Headsail Trimmer Ted Hackney and Omani Bowmen Ali Al Balashi. Although a relatively new crew Morrison isn’t feeling the pressure of home waters – quite the opposite.“It will be exciting to have the home crowd willing us on, I think the pressure we put on ourselves to perform is always high so the crowd will only spur us on. The Wave, Muscat, being the experienced crew, will carry the burden of needing to win – I’m starting to feel that maybe we can become the surprise package.” Read more from Stevie here.

Heading to Omani waters for the first time after showing promise at Act 1 just four weeks ago, Lino Sonego Team Italia and Team Turx powered by Kaya Ropes, are on a steep learning curve as the new teams on the block – but both are more then ready to rise to the challenge. Extreme 40 veteran and class co-creator Mitch Booth who shares skipper duties with Edhem Dirvana on Team Turx powered by Kaya Ropes explains, “This season is a great mix of experienced teams and new rookies. It will be interesting to see who learns fastest during the year. We have set out with a goal to develop the team and try to improve each Act. If we can finish on the podium at one Act by the end of the year, we will be very happy.”

With up to eight races planned each day the action will kick off Wednesday 11 March with the official media day before the free to enter public Race Village opens from the Thursday 12 March. The Extreme 40 fleet will race in the circuit’s action packed ‘stadium’ from the Almouj Golf Club offering excellent spectator views of the racecourse from the Race Village for four days of champagne sailing conditions.